Are you looking for something a little less aggressive than your recent trades have been? How about a strategy with a lower risk, higher-odds profile... even at the expense of some upside? (After all, a reliable handful of small winners is just as good as the occasional homerun.)

Option spread trades are one possibility. And don't let the fancy name fool you. They're not that complicated. In fact, we can walk you through one of the recent winners recommended by our Debit Spread Trader Advisory Service. There's nothing like learning from a real-life example.

But, first things first. What the heck is a spread?

In simplest terms, a spread is a two-option position aimed at making money across a range of possible prices for a particular stock or index. The space between the higher strike price and the lower strike price of the two calls or puts in question is the "spread."

As for the debit part, just like it sounds, were paying out something to open this sort of trade. We're not making a full-blown purchase though. We're offsetting our initial capital outlay by simultaneously selling a closely-related option. The option we're buying costs a little more than the option we're selling, so there's a net debit involved. If things go as expected though, we'll be able to reverse (or close) both of those trades at a higher price, or net credit. The difference is our net profit.

Clear as mud? Let's walk through the Debit Spread Advisor's recent quick score on Caesars Entertainment (CZR) to see how a call debit spread works. (Just reverse everything for a put, or bearish, debt spread.)

The setup: Back on April 20th we were bullish on Caesars. Shares has just formed a doji bar following a measurable pullback. What's a doji? A doji is where the open and close are near the same level, and fall more or less in the middle of an ideally-wide range. This often indicates a pivot is being made from a net-selling environment to a net-buying one. In this case the support we were seeing from the 20-day (blue) and 50-day (purple) moving average lines bolstered the bullish case. That bar is in the middle of the highlight on the chart below.

The setup was enough to prompt a trade using call options. In this case we opted to purchase the 83 calls expiring a week and a half later... on the 30th. These calls are nearly $7 in the money with Caesars Entertainment priced at $89.98 at the moment. But, given this stock's usual volatility, we had to pay $10.20 per contract to get them.

What if, however, there was a way to offset at least some of this cost? 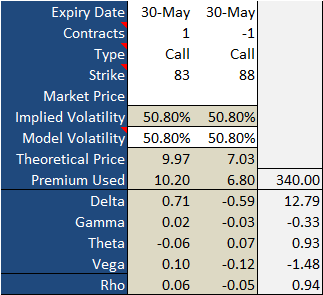 At the time we bought the 83 calls, we also sold - or went short on - the 88 calls expiring at the same time, selling them at a price of $6.80 per contract. The two-trade position only cost us a total of $3.40, or $340 per contract... the difference between the two contracts traded. This is sometimes referred to as being a net buyer of calls, since we're still more long than hedged or credited.

Adding this second leg (the 88 calls we shorted) does a couple of things, good and bad.

The good thing is the provision of cash. In this case, that's $6.80 per contract.

The downside is, this short trade exposes us to risk while also limiting our total potential gains. If Caesars shares move above the price of $88 per share then we WILL have to deliver shares to the counter-party at that price. Of course, we also own the 83 calls, so we don't really care... we can buy those shares at an even better price of $83 apiece. That $5.00 difference between strike prices (or $500 per 100-share contract) represents our maximum profit in the event of the short calls being exercised against us, or even if we simply decide to exit both legs of the spread. Just remember, we spent $3.40 to get into the trade, or $340 per 100 share contract. We can only walk away with a net profit of $1.60, or $160 per contract, and thart's only if CZR stock soars above $88 per share. But, that would be ok given the limited risk we're taking.

The worst case scenario is if Caesars Entertainment shares fell under $83 at or a little before the expiration date. At that point both calls would be worthless -- we'd be out the entire $3.60 debit. That's not an outrageous misfortune, but certainly not the ideal outcome. The ideal outcome is to unwind the two differing positions at a net amount in excess of $3.60. Caesars shares at any price above $88 nearer the expiration date would do the trick. 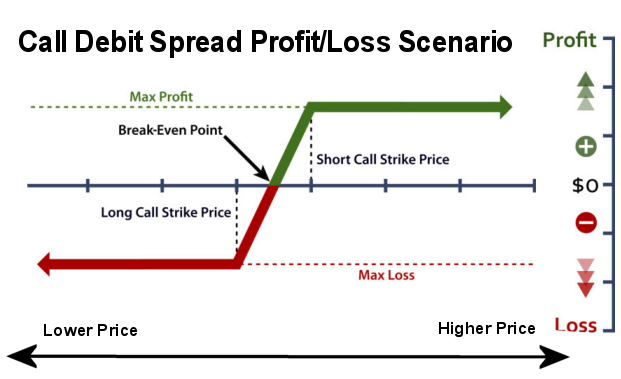 The cool part about this trade is, while our maximum profit is $1.60, or $160 per contract - the $5.00 difference between the two strike prices less the $3.40 we spent to enter the trade -- our downside is also limited to the $3.40 we spent on the two-legged position.

But, that's also where things can get tricky, and maybe even a little confusing. Why bother with a position that can lose more than it ever possibly profits?

The answer is, that maximum loss is rarely ever actually realized. Smart traders will start closing out this trade before shares slide to or under $86.40, which is where the breakeven point lies near the expiration date. That is to say, you should be able to sell the 83 calls and buy-to-cover the 88 calls you've shorted for some sort of net credit all the way up until that price is breached. You might not get the full $3.60 you put in, but with basic trading discipline you should get a good chunk of it back. The risk/reward ratio is fairly low on the actual risk you're taking. That's the reason you'd want to take on these trades.

Too often overlooked with debit spreads (bullish and bearish) is that you still have to ultimately make the right directional call. In this particular case CZR shares would have had to move higher from our entry point for us to make some money. Mere sideways movement would have worked against us, and downside movement would have worked firmly against us. This is in contrast with credit spreads, which can be profitable even if the underlying instrument stagnates.

In any case, we exited this trade the very next day, when CZR popped higher to a close of $94.12 following the doji bar from the 20th. We were able to buy back the 88 calls and sell the 83 calls we owned for a net credit of $4.10, or $410 per contract. This took a little patience and some wrangling, but that day's volatility worked in our favor by pushing premiums up more than they may have normally been.... and pushing the premium up on the 83 calls we owned a little more than it pumped up the price of the 88 calls we didn't own. That's netted a 20% gain on the amount of capital we put at risk, and while we would have like to netted 30%, we'll take a one-day 20% gain on our risked capital any day of the week. 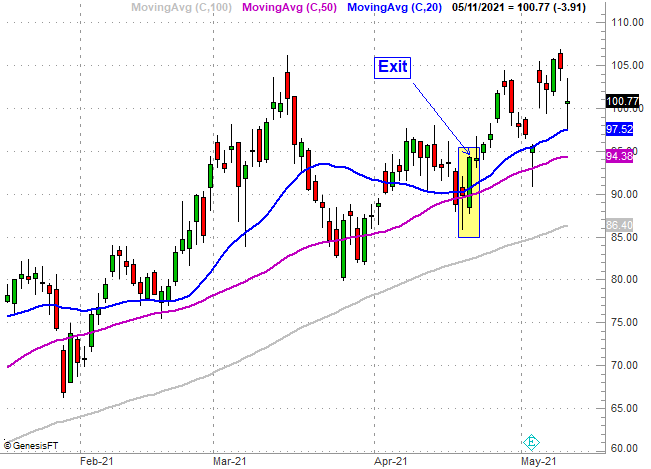 As is always the case, a few "paper trades" are recommended before you commit any real money to spread trades. Of, if you'd like BigTrends to find great debit spread trade setups for you, check out the Debit Spread Advisory Service here.