When Will Apple Finally Be a Buy? 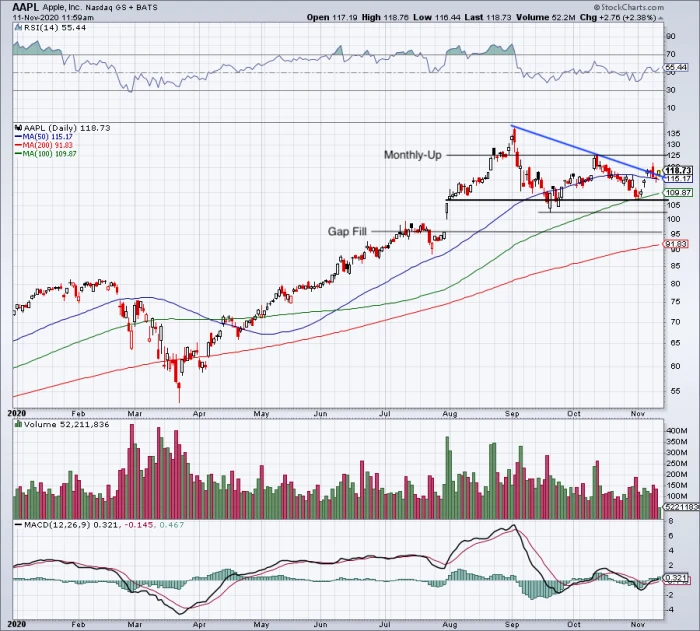 - Apple is starting to look better on the long side. Is it breaking out and does that make it a buy? Let's look at the chart. -

Apple  (AAPL) has had a busy couple of weeks and its stock has struggled.

The latest version of Its flagship device, the iPhone, was unveiled in October.

Then the company reported earnings on Oct. 29, which led to a mixed reaction as shares slid about 6% in the two days following the event.

On Tuesday, the company unveiled a fresh lineup of Mac computers. It introduced a new Macbook Air, Macbook Pro and Mac Mini with its own chip - the M1 - as it pivots away from Intel  (INTC).

Even with new product announcements and a recent earnings report, that doesn't even include the volatility we're seeing in the overall market.

That includes the post-election ups and downs, a pop-and-flop reaction in the indexes due to vaccine news and a violent decline in growth stocks.

With all this noise, bulls are wondering one thing when it comes to Apple: Is it a buy yet?

When Apple stock sold off in late October on earnings, shares found support in the $107 area from the 100-day moving average.

That makes both of those levels critical areas to watch should shares again tip lower. However, at least for now, that's not the case.

However, Apple and its $2.02 trillion market cap is a monumental name to watch. Its failure to breakout would have likely had a spillover effect on the market. That may be true on the upside, as well.

Currently breaking over downtrend resistance on Wednesday, bulls are hopeful that now is the time to buy Apple.

On the downside, a close below Tuesday's low could be a focus for investors. Not only does it drop shares below this week's low, but it puts Apple back below the 50-day moving average and downtrend resistance.

Below that and Apple may go on to test the September low near $102 and par at $100. For now, a larger correction doesn't appear to be on the table, but it's possible if the stock begins to rotate lower. In that event, a move below $100 could trigger a gap fill toward $96 and a test of the 200-day moving average, all of which would be healthy, in my view.

For now though, bulls are watching today's breakout for further upside potential.