When to Buy Goldman Sachs After It Crushes Earnings 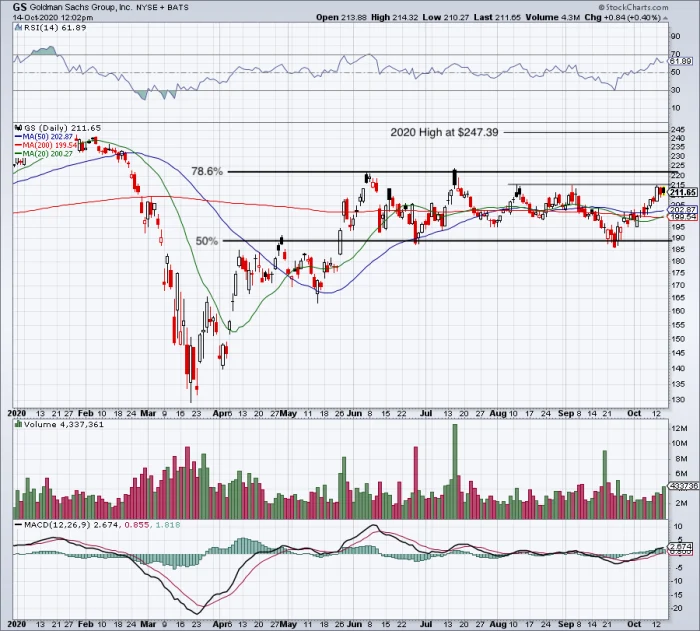 The muted response is disappointing, in part because the company smashed expectations in the quarter. Earnings of $9.68 a share beat estimates by $4.24, while revenue of $10.78 billion grew 29.6% year over year and beat expectations by almost $1.4 billion.

This was a monster quarter that Goldman Sachs stock simply isn't getting credit for.

Goldman is a financial stock, but it's less a traditional bank and more of a trading desk and investment bank. We saw good results out of JPMorgan Chase  (JPM) and nothing special from Wells Fargo  (WFC). But we saw stellar results out of Goldman Sachs.

As I wrote Tuesday in a Bank of America  (BAC), the banks have struggled, but Goldman has been doing well. As a result, I said the company may have what it takes, "but we won't know until the numbers roll in."

The numbers have spoken and they are robust. Now will the stock act like it?

At a time where bank stocks are struggling, Goldman Sachs is too. However, the stock is outperforming the group off the coronavirus lows. As such, the stock is above the 20-day, 50-day and 200-day moving averages, as well as the 61.8% retracement.

That's getting the stock rather coiled, while a close over this level should give it the ignition to really rip higher. If the bank stocks receive essentially any investment flow, Goldman Sachs could rally hard if it clears this level.

Long-term investors can justify a position in Goldman right now after a quarter like that, but traders will likely want some confirmation before getting long. A close over $215.65 puts it over a three-month high and will act as the trigger bulls need to see.

In that case, $222 will be the first upside target, which comes into play around the 78.6% retracement and the June and July highs. Above puts the company's book value of ~$229 a share in play, followed by a possible test of the 2020 high near $247.

On the downside, I need to see this one stay north of $200. Not only is this level psychologically relevant, but it's where Goldman Sachs has a cluster of moving averages.

Below puts range support and the 50% retracement in play near $188.

Lastly, while not shown on the daily chart, the 200-week moving average has been resistance. Currently near $210.60, a weekly close above this mark would be notable.