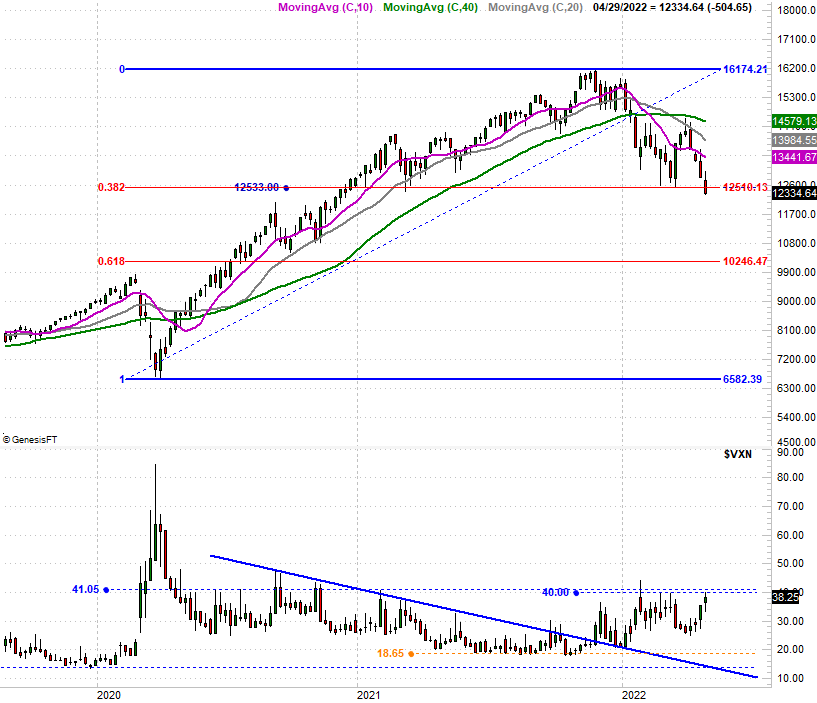 The bulls made a valiant effort, but when push came to shove late in the week, the bears were doing all the shoving, And, it was even worse than Friday's near-4% stumble would suggest. With that move, the S&P 500 fell to its worst close in over a year, breaking under a major technical support line in the process. Now that the floor's been shattered, it's easier for the bears to continue digging in.

And that's not even the worst part about it.

We'll look at what makes last week's action worse than it seems in a moment. First, let's recap last week's most important economic announcements and preview what's in the lineup for this week. There's some major market-movers due.

It was a busy week all around, kicking off with a look at the Conference Board's consumer confidence score. Though down just a bit from March's upward-revised figure, confidence came in notably better than expected. It's still trending lower though, and while the third and final reading for the Michigan Sentiment Index for April dramatically improved from March's print, it's still alarmingly weak. 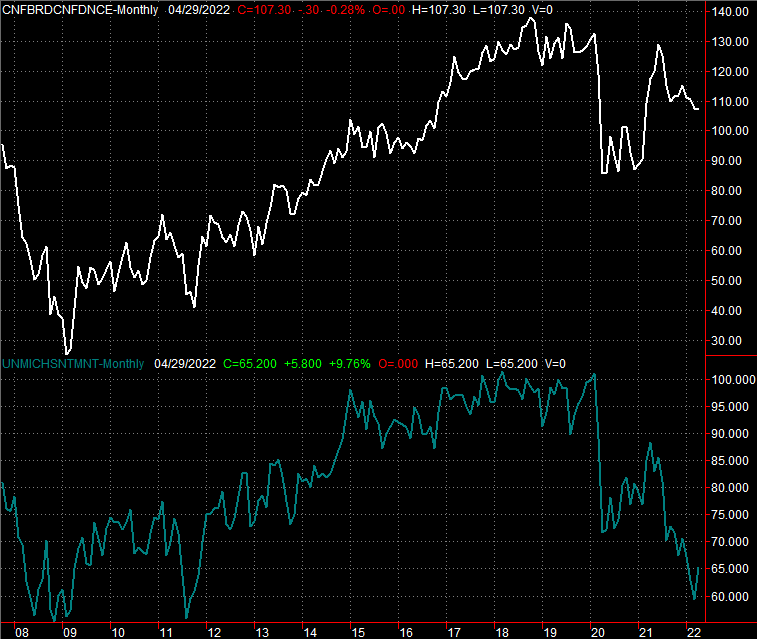 Waning confidence isn't preventing people from paying good prices for homes, however. The FHFA Housing Price Index grew 2.1% between January and February, and February's reading for the S&P Case-Shiller Index accelerated to a 20.2% year over year increase. Both continue their march into record-high territory, though bear in mind these numbers are only through February. Much has happened -- like interest rate increases -- in the meantime. 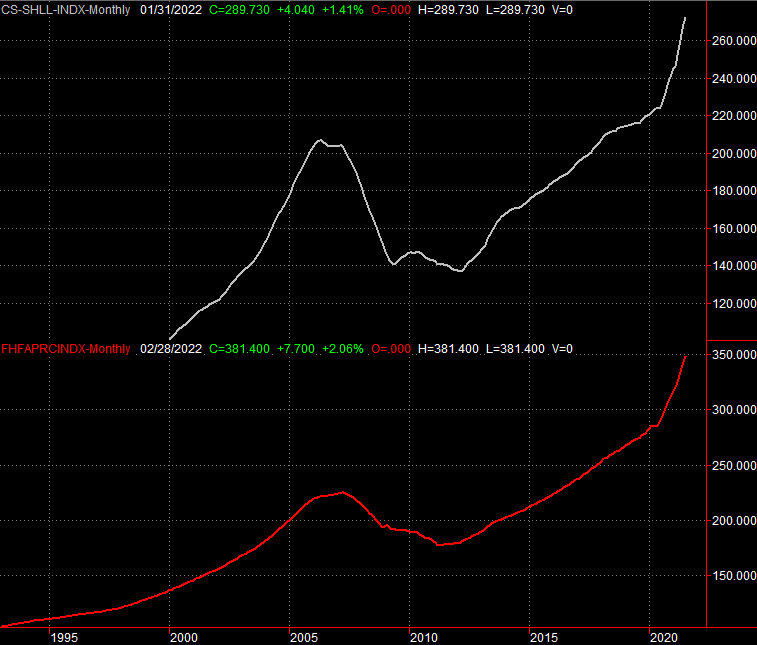 Also on the real estate front, we learned last week that March's new home sales fell from a pace of 835,000 in February to 763,000 in March. Just note that February's data was revised dramatically upward. Even so, it looks like these trends are starting to move in the wrong direction. 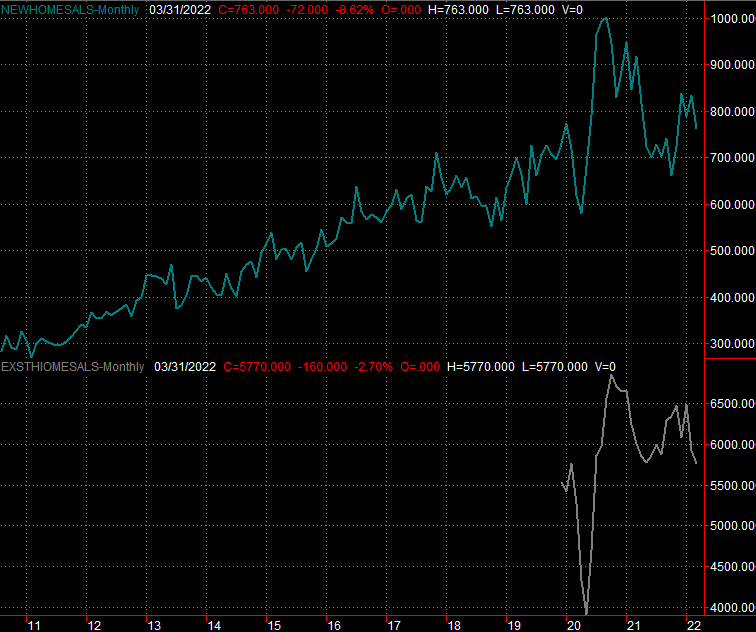 Although there's no chart of it, notice that the first quarter's GDP contracted 1.4%, versus expectations for growth of 1.1%. In some regards we can't read too much into the shortfall, as we're still coming out of the pandemic and coming off of the post-pandemic rebound surge -- it's a difficult guess to make. Even so, it's a sizable shortfall, and not one that's apt to be reversed back into positive territory with future revisions. It's worth mentioning that rampant inflation may be taking a bigger toll than many economists, forecasters, and investors appreciate. 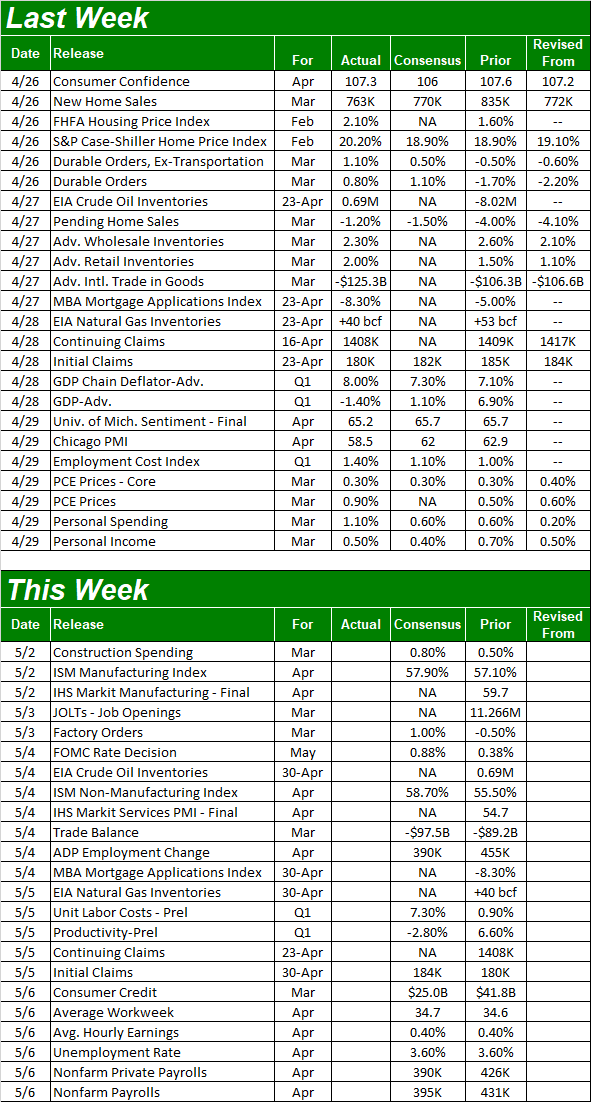 This week's a biggie, for a couple of different reasons.

The party starts on Monday with the Institute of Supply Management's update of its manufacturing index, followed on Wednesday by the ISM services index. Both are projected to move higher, somewhat unwinding a soft patch for each. It may be the beginning of a much-needed rebound. 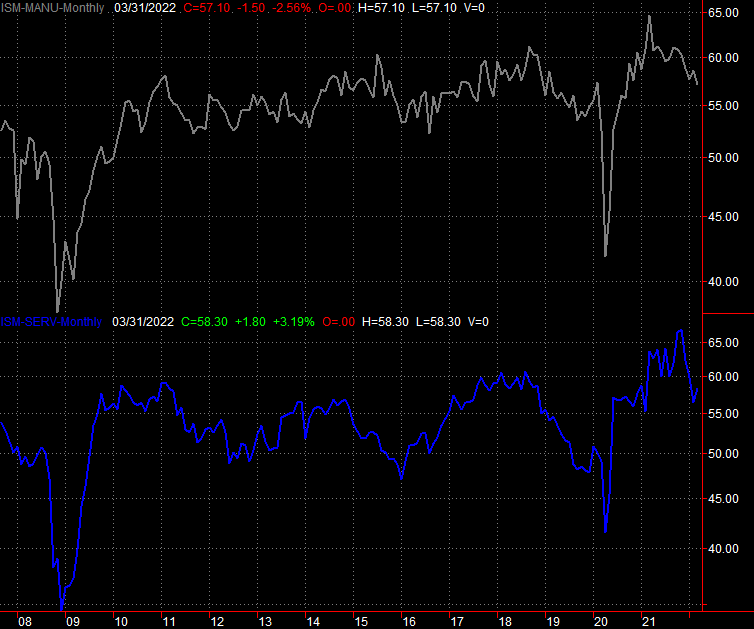 Also on Wednesday we'll hear from the Federal Reserve about interest rates. Not surprisingly, economists are calling for an increase aimed at curbing inflation. What's not completely realized, however, is that the market is anticipating (and pricing in) a 50 basis point hike rather than a mere quarter-point hike. It's a sign the FOMC may be more concerned about the impact of inflation than most of the Fed's governors are letting on.

Finally, look for last month's jobs report on Friday. The projected addition of 395,000 new (net) jobs won't likely be enough to push the unemployment rate any lower, but at 3.6%, it's about as low as it can feasibly go. 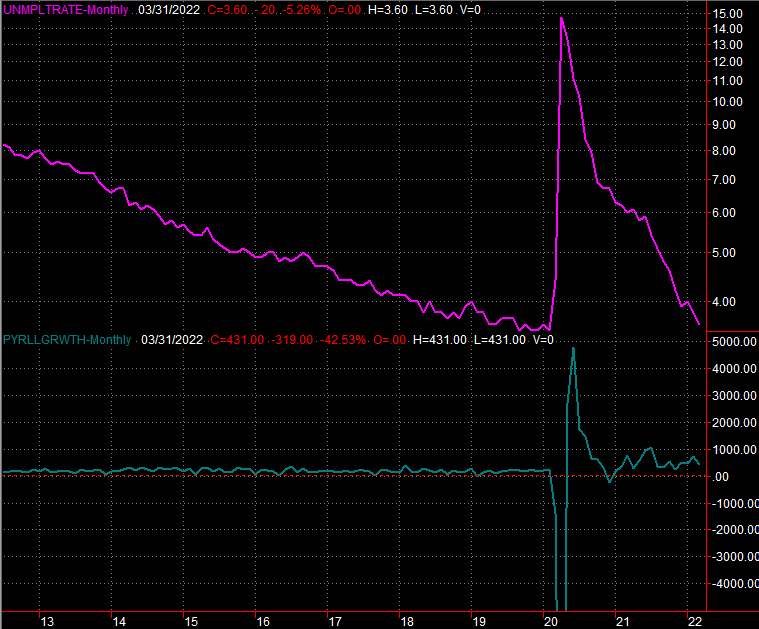 Stocks almost escaped a stumble into some serious trouble. But, Friday's selloff did just enough damage to push the market past a critical line in the sand. Now that the damage is done, it's so much easier for stocks to keep sliding.

Take a look. On Wednesday the S&P 500 brushed the 4159 level that served as technical support in March, sparking something of a rebound through Thursday. When the sellers got their second chance on Friday though, they got the job done. Friday's close of 4131.93 is clearly below that key technical floor. In fact, it was the lowest close in nearly a year. 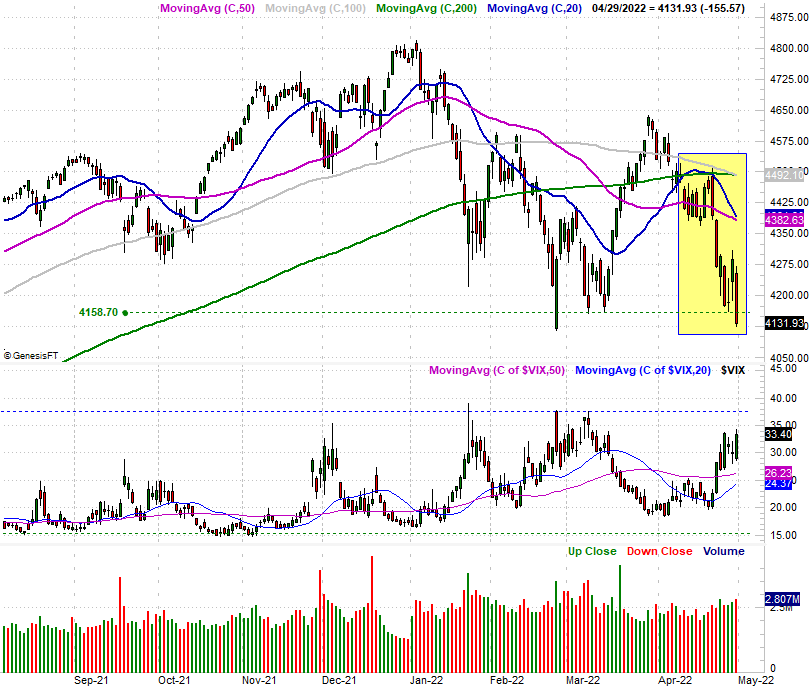 The NASDAQ Composite is in similar (though not identical) situation. The composite's key floor had been established at 12,580 in February and March, but that level was broken earlier last week, and then rebroken in earnest on Friday. It's even further away from bouncing back than the S&P 500 is. Also note that both the S&P 500's as well as the NASDAQ Composite's key moving average lines are all now sloped downward, underscoring the market's momentum. 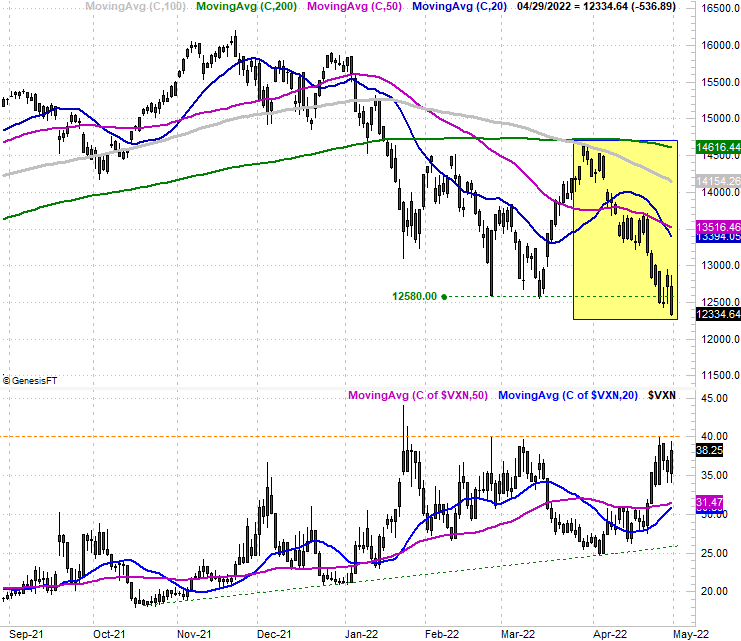 It's not what happened on either daily chart that's so interesting though. It's what didn't happen. While both indices were getting shellacked, neither volatility index -- the VIX or the VXN -- shot higher anywhere near the degree one would expect to see when the market's logging its worst day in months, and its worst month since March of 2020 when the pandemic first made landfall in the United States. The NASDAQ Volatility Index seems capped at 40.0, while the S&P 500 Volatility Index is stuck (well) under 37.50.

What's it mean? It means as rough as Friday and April were, fear isn't peaking to the degree you'd usually expect to see when the market is bottoming. In other words, it's arguable that more damage needs to instill more worry before a true capitulation has been logged and stocks are ready to roll higher again.

Here's the weekly chart of the NASDAQ Composite for more perspective, and with an important decision. On the weekly chart we've added Fibonacci retracement lines. With last week's weakness the composite is also now below the 38.2% Fibonacci retracement level also at 12,533. (Yes, that floor was a double-support level, making last week's break under it double-trouble.) The weekly chart also gives you a better idea of how far the VXN hasn't come yet. It's at "a" ceiling, but not at "the" ceilings nearer 50.

Same story for the weekly chart of the S&P 500 and the VIX, although it's clear on the weekly chart that last week's break below support was a just-barely move. Still, the weekly perspective really shows just how broken the 2020/2021 rally now is. 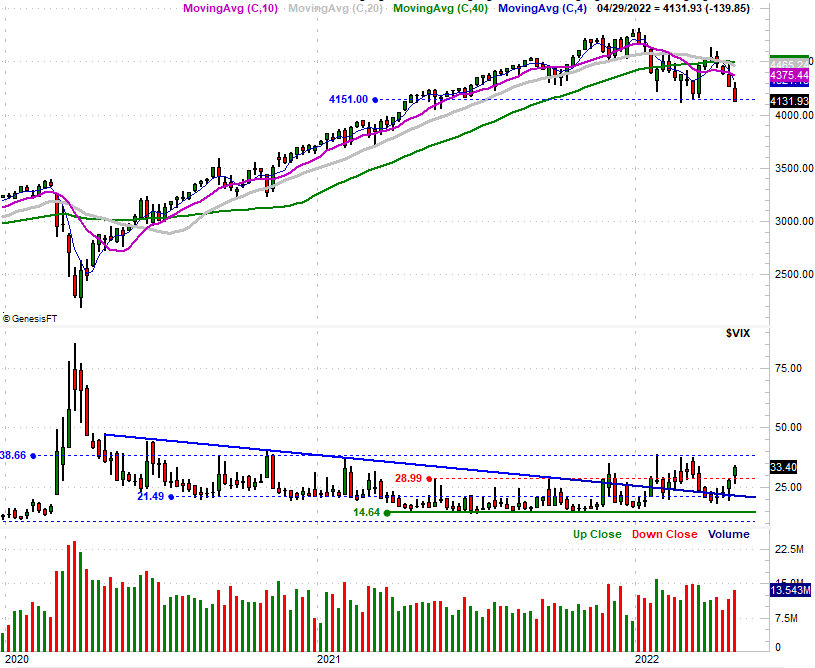 Don't be surprised to see a major bullish pushback early this week. Just don't be too enamored by it either. Big selloffs encourage big buy-ins. It remains in question, however, how long any big buy-in might last. The indices would need to get at least back above their 20-day and 50-day moving average lines before entertaining the prospect of a recovery. At the other end of the spectrum, while stocks may bounce a little early this week, the next break under the aforementioned technical floors could prove to be a back-breaker for the market.