Trading Amazon on Earnings: How Much More Can It Rally? 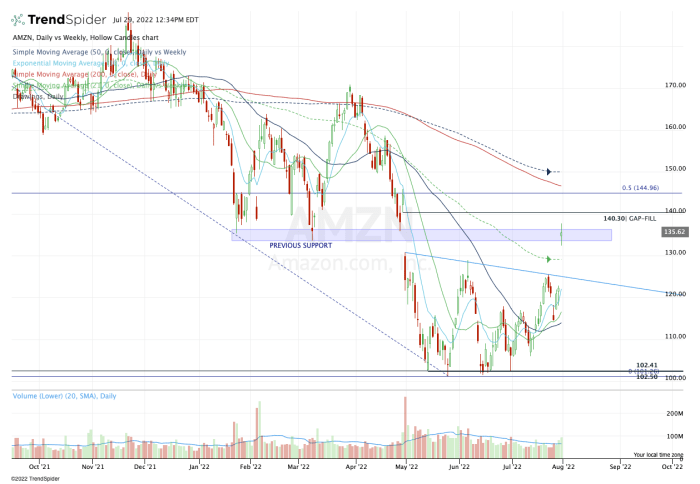 -- Amazon stock is rallying on earnings, but could be nearing a key resistance zone. Here's how to trade it now. --

It's been a long time since we've been able to say this, but shares of Amazon  (AMZN) are rocketing higher after earnings.

Shares are up more than 11% on Friday after the company delivered better-than-expected results for its latest quarter.

Despite generating a loss for the second straight quarter, Amazon blew away analysts' revenue expectations with sales of $121.2 billion vs. estimates of a $119.08 billion.

Helping lead the charge was Amazon Web Services, which grew 33% year over year, while overall revenues only grew by 7.2% vs. the same quarter a year ago.

The reaction from big tech is important, as these stocks can be important momentum drivers for the market.

For what it's worth, Apple (AAPL) is also rallying on Friday after reporting earnings, while Alphabet (GOOGL) (GOOG) and Microsoft (MSFT) both rallied this week despite missing on top- and bottom-line estimates.

Now the question becomes, how far can Amazon stock go?

When I saw Amazon stock gapping higher, I was curious about how it would handle the $135 area. So far though, it's doing pretty well with it.

The $133.50 to $135 zone was a significant support area in the first quarter and in the first half of April. Later that month, Amazon stock gapped below this key support area on heavy volume following disappointing earnings.

Given the stock's poor performance - and 46.3% peak-to-trough decline - one may have reasonably expected this prior support zone to be resistance.

That said, we could still see this area become resistance if the stock cannot maintain momentum. In fact, we're already starting to see shares waver in afternoon trading, so it's certainly something to keep an eye on.

On the upside, there's a gap-fill level to be mindful of at $140.30. If Amazon stock can fill this gap and continue to press higher, the $145 to $150 area could be in play. Near that mark, it finds the 200-day and 50-week moving averages, as well as the 50% retracement from the recent low to the all-time high.

If Amazon breaks below that mark, the $129 to $130 area is in play, which was a resistance zone last quarter and roughly where the 21-week moving average comes into play.