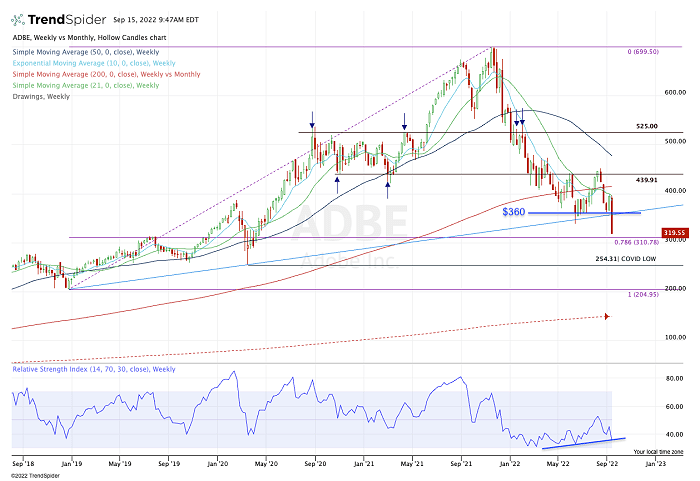 -- Adobe stock is setting 52-week lows after a $20 billion deal and mixed results. Here are the levels to focus on now --

In a surprise move, Adobe Systems (ADBE) before the open announced a sizable acquisition, agreeing to acquire Figma for $20 billion. It also reported its quarterly results, which were scheduled for after the close.

As for the first bit of news, the company plans to acquire the collaborative design platform for $20 billion in a half-cash, half-stock deal.

As for its fiscal-third-quarter earnings, the graphics-software specialist earned $3.40 a share on revenue of $4.43 billion in sales.

That was a slight beat on earnings and a slight miss on revenue: Analysts were looking for $3.35 a share on $4.44 billion in revenue. In a word, mixed.

But the market is voting clearly, sending Adobe stock lower by more than 13% to new 52-week lows and its lowest price since April 2020.

The earnings may be mixed, but the market's reaction is decisively lower. And unless Adobe stock puts together some sort of enormous rebound, today's action is quite discouraging for the longs.

As the weekly chart above shows, Adobe stock is breaking below longtime uptrend support (blue line). This support mark begins in late 2018 and includes the 2020 covid low and the June 2022 low.

The stock is knifing through this level now and plunging into no man's land.

It would be constructive to see the 78.6% retracement zone hold near $310, which was a nice breakout area in late 2019 as well. Still, that's not a great catalyst for the bulls to lean on.

If it holds and we get a bounce, traders will have a risk level they can measure against. But by and large, Adobe stock is in a downtrend at the moment.

I'm not suggesting that Adobe is going down to $200 or anything necessarily catastrophic like that.

Rather, the charts are simply not that constructive for the bulls (with the exception of $300 to $310 holding).

On the upside, there's a long way between current prices and $360, but that's the level bulls want to see the stock reclaim.

Be careful on a rebound to this area, as it may act as resistance on its first attempt.