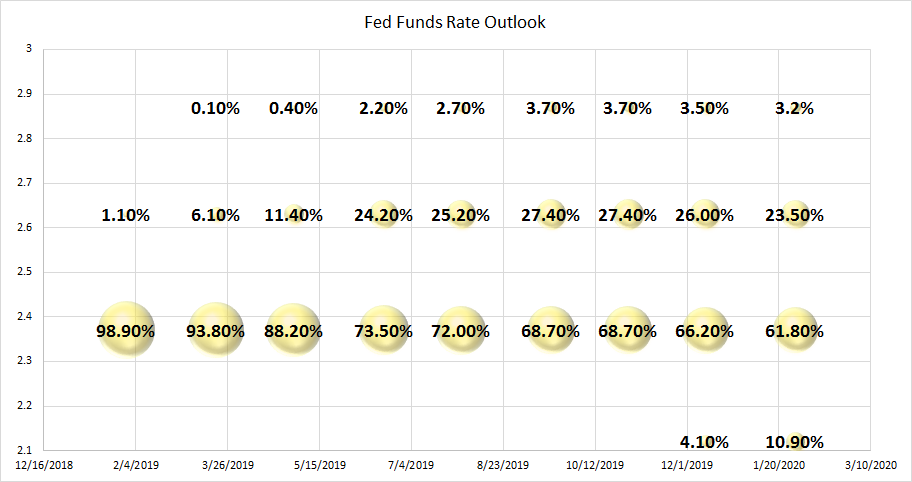 On Wednesday of this week, the Federal Reserve will have an opportunity to change the nation's interest rates. Though for the better part of 2018 the chatter suggested three more rate hikes were in the cards for the current year, neither the Fed nor traders believe we'll see one this time around. Inflation has been too tame and borrowing has been too lethargic to feasibly make borrowing less affordable and simultaneously crimp pricing power companies enjoy.

Bolstering the case that the Fed won't do so on Wednesday: After a brief pause in a string of rate-hikes, the FOMC put one in place last month, right in front of what ended up being a record-breaking government shutdown. While the impact shutdowns aren't as grave as politicians may suggests, clearly they're of no help.

As of the latest look, traders say there's a 99.8% chance the Federal Reserve will keep its target rate at between 2.25% and 2.5%. That still leaves plenty of time, and opportunity, for the FOMC to push rates up to its expected year-end target of between 2.5% and 3.0%, however, as the current 'dot plot' indicates. 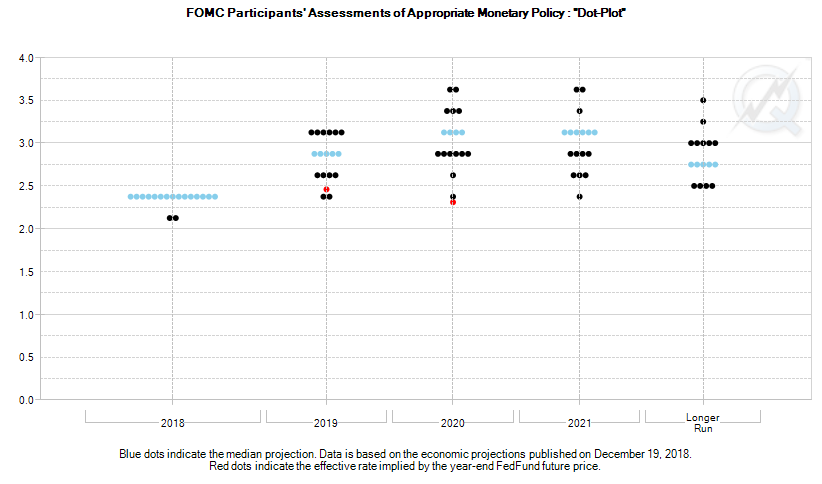 But, just for the record, those same traders aren't betting the Fed will be as aggressive in terms of rate-hikes this year as the Fed believes it will have to be. In fact, traders are mostly betting - with real money - that the Fed funds rate will still end the year at its current target of between 2.5% and 3.0%. Take a look at how the CME FedWatch data indicates futures traders are betting right now.

The red dot on the dot plot shows where the futures market is currently betting the Fed funds rate will be in late-2019, and in late 2020. Normally we'd see traders make their bets in near-perfect alignment with the FOMC.

As for the take-away, just know that for some reason, people don't think the Federal Reserve will need to be as aggressive with rate hikes this year or next as the FOMC itself thinks it will have to be. It would be curious to know what those speculators see that the Federal Reserve's voting governors don't see. Or, perhaps the new dot plot will look much different, broadly lowering the foreseen target range.

Even then, however, it's curious that the professional traders are looking for rates to possibly even move lower in 2020, while the Fed continues to call for slightly higher interest rates in 2020 and 2021.

One big caveat has to be acknowledged. That is, the interest rate futures used as the basis for the odds-making model may be widely used as a hedge rather than a straight-forward speculation. In other words, while the futures suggest the pros are betting against more rate increases, they may be taking on what they know could be losing trades because they'll likely make even more money if they're wrong about rates.

We're also closer to the beginning of the year than the end of it. Traders would make bets on higher rates later on, when there's more visibility and clarity.

Still, that would be a relatively unusual kind of activity from the speculative futures market. More often than not, the pros trade these instruments on a straight-forward basis.

Whatever the case, Wednesday's news is going to be well-watched. In the unlikely even the FOMC does raise rates, though it would point to economic strength, investors may not like the perceived implications. In a similar vein, if the Fed doesn't raise rates but still reveals some hawkish plans for 2019 despite the impact of the government shutdown, that too could scare investors. A little more dovishness would be well received, though ironically, the wrong spin on any fresh dovishness could also lead investors into thinking the FOMC sees something troubling on the horizon.

It appears some futures traders, however, already see that trouble.

Either way, buckle up. The Fed's decision should be posted around 2 pm on Wednesday.