This is ‘the biggest issue for small caps’ as the group outperforms, trader says 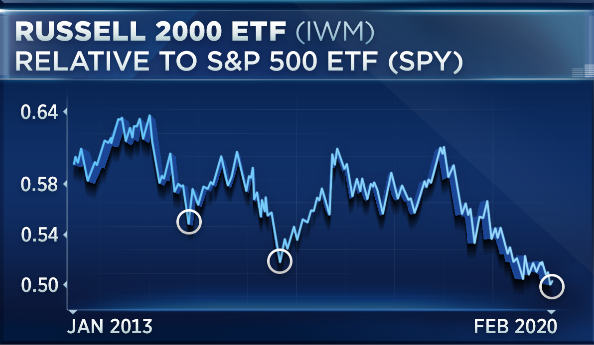 The iShares Russell 2000 ETF (IWM), which tracks the small-cap-heavy Russell 2000 index, is handily outperforming the S&P 500 this week, climbing over 4% week versus the S&P’s roughly 3.5% gain.

After years of underperformance by the index, the move is notably bullish for the group, especially if fears around the coronavirus outbreak and its impact on Chinese markets subside, said John Petrides, portfolio manager at Tocqueville Asset Management.

Tie in the Federal Reserve being “on hold” with interest rates, and investors could find a “home” in the small caps, he told CNBC’s “Trading Nation” on Wednesday.

“Valuations are quite attractive [there] compared to their large-cap brethren,” he added.

But there’s still one lingering problem with small-cap companies that’s worth watching, the wealth manager said.

“I think the biggest issue for small caps, actually, is leverage ratios,” or how much debt a company has versus its equity and capital, Petrides said. “Typically, their balance sheets have more debt relative to large cap. They’re just smaller, so they’re plagued by a law of lower numbers.”

So, if interest rates rise for any reason, that could squeeze small caps’ balance sheets, putting their underlying stocks in a bit of a crunch, he said.

“That’s the fly in the ointment here,” he said. “If we can stay contained, then I think valuations warrant higher multiple expansion on the small-cap side.”

In the same “Trading Nation” segment, technical analyst Katie Stockton focused on the IWM’s performance relative to the SPDR S&P 500 ETF (SPY), which tracks the S&P.

“The ratio is definitely in a downtrend that’s been very well established. It is surprising, with that in mind, to see this outperformance,” said Stockton, founder and managing partner of Fairlead Strategies.

“We did not see a January effect this year, which usually calls for outperformance by small caps in January in sort of a tax-loss selling bounce,” she said. “But now, it does appear due for a relief rally favoring small caps over large caps.”

She added that the chart is also starting to flash “some downside exhaustion signals” similar to ones in 2016 and 2014, which ended up creating “intermediate-term lows” in the small caps’ performance relative to the large-cap S&P ETF.

“So, there are reasons to expect a relief rally in relative terms,” Stockton said.

The IWM was down slightly Thursday morning.