The Charts Say Roku Can Rally to $300 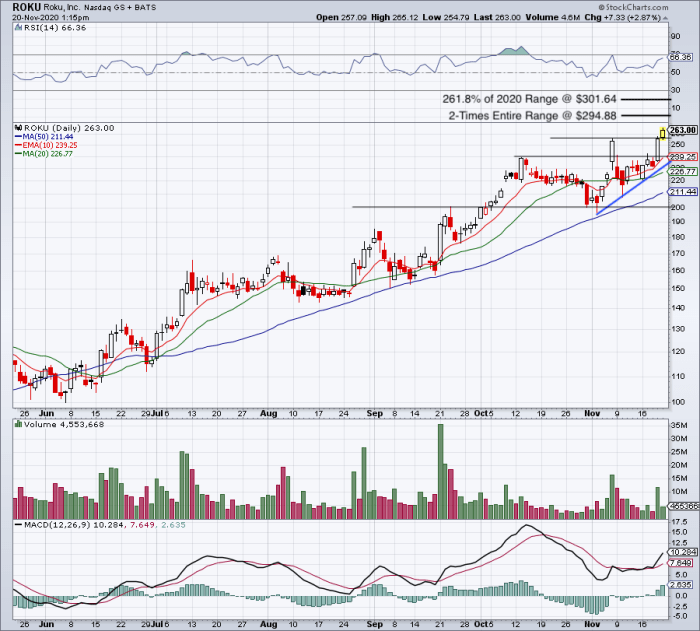 - Roku continues to trade quite well after earnings and rumors of HBO Max coming to the platform. Let's look at the chart. -

Shares of Roku  (ROKU) were hitting new all-time highs on Friday, up about 3% so far on the day.

The momentum comes after the stock jumped more than 10% on Thursday. If Roku can finish Friday's session in positive territory, it will have rallied in four the last five sessions.

What's given it the spark? About two weeks ago, Roku reported strong earnings, which sent the stock higher by 12.5% on the day to new highs.

While shares couldn't hold those gains in the next two days - which was a real gift for anyone that took the time to peruse the press release - it set the tone that bulls were in control.

Within a few days, Roku stock had recovered, setting it up for Thursday's burst higher as it again hit new highs. That came on news that AT&T's  (T) HBO Max was trying to come to the Roku platform, a move that HBO Max recently made to Amazon  (AMZN) Prime.

The fact that AT&T was withholding its HBO Max content from Roku and Amazon - the top-two streaming platforms - like it was going to be just fine without them is practically laughable at this point.

But at this stage of the game, that is not the point. The point here is that Roku is at new highs and that the rally may not be over.

The daily chart above does a good job highlighting what a busy month it has been for Roku stock. Now maintaining above its post-earnings high, bulls want to see if it can continue higher.

In other words, this stock - which isn't even considered overbought by technical standards - could still have plenty in the tank for a push higher.

If that doesn't turn out to be true, we need to consider Roku's downside levels as well.

The first line in the sand is the $240 breakout level and the 10-day moving average. A dip to this level will likely bring uptrend support (blue line) into play too. If bulls really have control of Roku, this area should trigger a decent bounce.

If it fails, we could ultimately see a test of the 50-day moving average, which has been solid support since late June.