Stocks are the most overbought in 22 years, and history says that's bullish 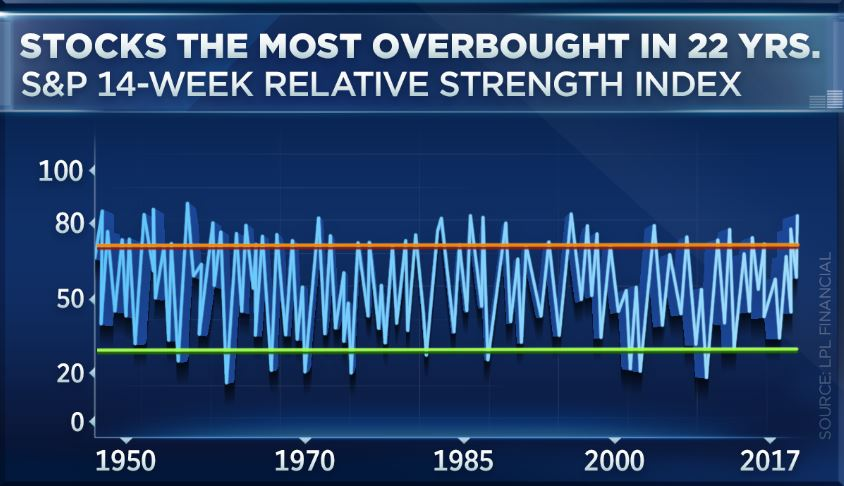 It's proved to be a major market theme this year: Stocks are hitting all-time high after all-time high in what appears to be an unstoppable juggernaut of an equity rally. Many say that's cause for concern, as the broader market has seen so few pullbacks this year amid virtually no volatility.

According to one analysis, however, the market's historically overbought condition is no reason to press the sell button.

The S&P 500 is the most overbought in 22 years, as measured by its 14-week relative strength index, said Ryan Detrick, senior market strategist with LPL Financial. The classic overbought/oversold indicator is historically elevated, above 80.

But Detrick found that when the S&P 500 has become this overbought (in 13 times since 1950), the market has risen the following year all but once, seeing an average annual move higher of 11 percent.

"In other words, really strong returns going forward, even after we are so overbought, which is one of those rare times that maybe this could be a continuation of the bull market. Things still look pretty good, even though we are still historically overbought here," Detrick said Wednesday in an interview with CNBC's "Trading Nation."

This is just another stunning statistic to pile into a record year for records. This year has also produced the longest daily streak ever without a 3 percent pullback, and the most all-time high records for the Dow Jones industrial average.

Though Detrick is bullish at these levels, he said one risk he sees going forward is potential market turbulence as Jerome Powell's tenure as Fed chair begins early next year. "Overvaluations" are also a concern, Detrick said, but corporate earnings continue to be quite strong.