Starbucks Stock Is Heating Up but Risks Going Cold 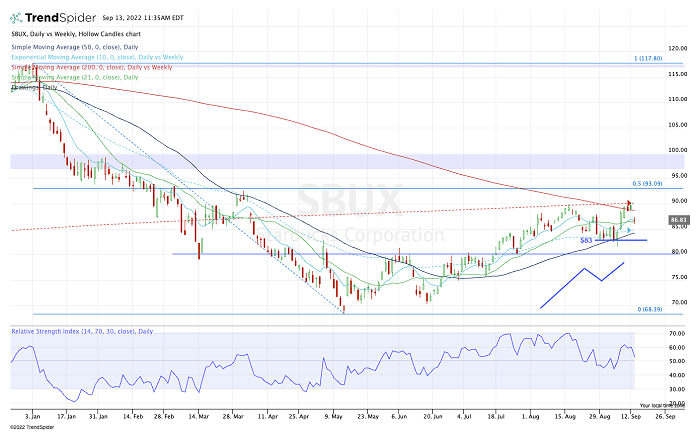 -- Starbucks has its investor day on Tuesday and is so far avoiding getting crushed in the market selloff. Can that momentum last? --

Starbucks (SBUX) is in focus on Tuesday as it's in the middle of its investor day.

The shares are down less than 1% on the day, a performance better than that of the S&P 500 and Nasdaq. The broad indices are getting buried on a worse-than-expected inflation reading.

With presentations slated for the morning and afternoon, investors are hoping that Starbucks can pull a rabbit out of its hat and give them something to really cheer for.

Less than two weeks ago, Starbucks named Laxman Narasimhan CEO, so investors will be extra interested in what the company has to say (even though Narasimhan won't serve as CEO until next April).

Starbucks stock has done a decent job of holding up today, but let's take a closer look.

Interestingly, Starbucks stock looks similar to Oracle  (ORCL) , which is trying to rally on Tuesday after the software giant reported earnings.

In any regard, we have a nice pattern in play here. Starbucks stock put together a rally, then a bull flag consolidation pattern down to the 50-day moving average.

The shares found support in this area, as well as at $83, and then pushed higher to the 200-day moving average (this is what reminds me of the setup with Oracle).

With the latest rebound, though, Starbucks stock ran right into the 200-day and the 200-week moving averages. Both are now rejecting the stock.

A close below $80 could put the low $70s back in play for Starbucks shares, so if support is tested, it's critical that it hold.

Overall, the bulls have reason for at least some optimism if Starbucks can avoid spilling lower. But if the overall market were to tank, Starbucks stock will likely struggle to hold up.