One corner of tech could be key to an October boom or bust, chart watcher says

What markets do in October could depend on one corner of the tech world.

"The semiconductor group has been an important one for many decades in a leadership sort of way. But in the last three or four years or five years, it's been particularly good in giving us a sense of what's going to happen to the market next," Maley told CNBC's "Trading Nation" on Thursday.

Maley says semis stocks are facing a critical crossroads - the next move could either signal a market rolling over or a building breakout. He spoke before President Donald Trump announced that he has tested positive for the coronavirus.

"This time last week, [the SMH semiconductor ETF] was testing the bottom end of the sideways range it had been in over the last week or two so it looked kind of perilous there, but this week the group has rallied over 5% and actually broken slightly above the top end of that range and so that's positive," he said.

Maley added that the all-time high set on Sept. 2 is the next important level that the SMH ETF would need to clear. The ETF is more than 3% below its all-time high of $184.61.

"If we break above [that level], it's going to show that the tech group looks real good, especially the chips, and the broad market is going to move higher, so we'll see if we get a dip first or for it to rally first," said Maley.

In the same "Trading Nation" segment, Joule Financial President Quint Tatro said not all semis stocks will be winners.

"Despite the performance, we're not a fan of Broadcom here," Tatro said. "The company, really over the last several years, has levered up the balance sheet significantly, now almost two times debt to equity [and] paying $13 in dividends. ... So, they're playing a dangerous game here."

Instead, Tatro prefers Applied Materials, which he sees as a semis stock with an attractive valuation. It trades at 13 times forward earnings, below the SMH ETF's 21 times multiple.

Maley is also watching Applied Materials. He told CNBC in an email that a move above its double-top high of $68.50 within the next nine months would be a "wildly bullish" for the stock. 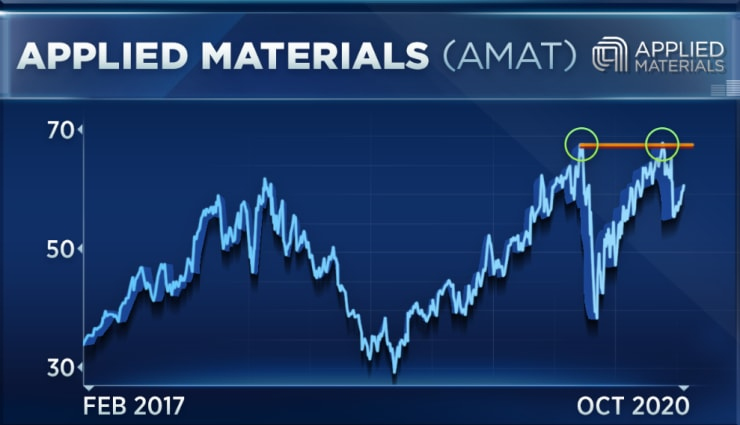