Macy's Chart Shows More Upside Ahead if it Clears This Level 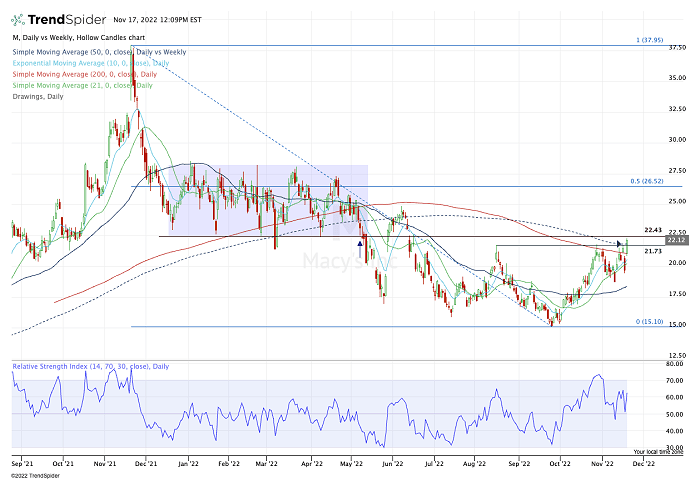 -- Macy's stock is flying higher on Thursday following better-than-expected earnings. If it can just clear one key level, it could continue to rally. --

Shares of Macy's (M) are rocketing higher on Thursday, up more than 12% following a better-than-expected earnings report.

The move comes amid a mixed outlook in retail and on a mixed day in the overall market as stocks are under pressure.

For Macy's part, earnings fell more than 50% year over year and revenue dipped slightly, but profits topped expectations while sales were mostly in-line.

However, it gave a slight boost to its full-year outlook and in general, investors are digesting the news pretty well.

That said, the stock still has to prove itself by clearing a key area on the charts.

Macy's stock bottomed back in September and did not make new lows with the rest of the market in October.

In fact, the stock has put in several notable higher lows over the last few months, a bullish technical development.

Admittedly, it does help that Macy's stock pays a 2.8% dividend yield and trades at roughly 5.5 times this year's earnings. In other words, this may not be a best-in-breed retailer, but it is quite cheap.

The $21.75 level was multi-month resistance, marking the high in August and October. Just below this level is the 200-day moving average and just above it is the 50-week moving average. Lastly, $22.50 was strong support in the first half of the year.

On the downside, bulls do not want to see Macy's stock lose the $20 level. Should that occur, then the 50-day moving average could be in play.

If stocks do go on a big run - and particularly if retail stocks rally on Black Friday and Cyber Monday - then Macy's stock could be primed to run too. That's particularly true if it can clear and stay above $22.50.