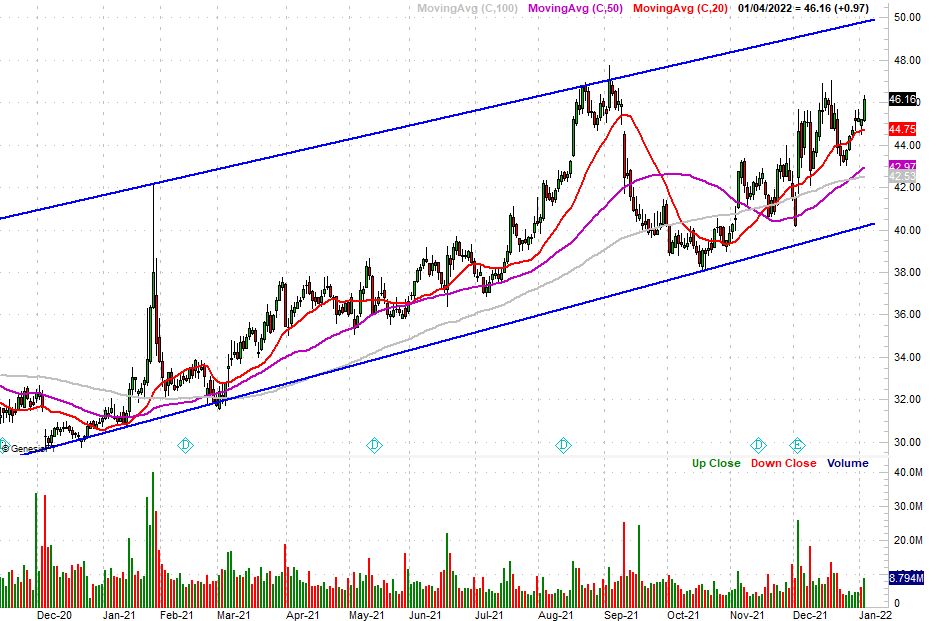 With nothing more than a quick glance it would seem Kroger (KR) stock is too far gone to step into now. Shares are up 18% from October's low, which is typically about as far as any stock of its ilk can travel in one shot. Indeed, that's a little farther than a grocery stock should be able to move that quickly. It's not out of line to expect at least a little bit of profit-taking here.

Except, perhaps Kroger is an exception to this assumption. There could be more upside left to reap than it would seem (and feel) like there is with just a quick look. The big clue? The stock's history.

It's a rarely-discussed idea, but veteran traders understand the idea that each and every stock has its own personality of sorts. That is to say, how one ticker behaves given a particular chart-based scenario isn't necessarily the same way another stock would behave given the exact same scenario. The only way to get to know a stock is by exploring its history.

On that take, take a look at the weekly chart of Kroger below. The rally from October's low was actually sparked when the stock bounced off a floor that connects the key lows going back to late 2020. More important than that, though, Kroger shares have yet to touch a well-established technical ceiling that connects all the key lows going back to March of 2020. It currently stands at just under $50 per share, though it's rising a little bit each and every day.

Without knowing more about this company's story it would be easy to chalk up the short-lived but massive surges to sheer volatility. And it's been a volatile name to be sure. But, it's not as if those big pops were completely random and mere one-day affairs. They were calculated, news-based runups borne from investors' calculated assumptions about the company's growth. The big bump from January of last year and then again in August actually lasted for several days, even of they did eventually roll over and drive shares back to a major technical floor.

Given this history that's made up of gains that aren't quite so random, the current advance is actually a compelling, bullish advance that's got good momentum. The fact that the 20-day moving average line (red) appears to be serving as support several times on the way up only bolsters the bullish case.

Will we see this gain pan out like all the past ones have? Maybe. Maybe not. We just don't know. Trading is a game of weighing the odds, but the odds are never 100%. There's always risk. From an odds-making perspective though, there's around four points worth of high-odds action on the table that may well be worth taking a shot on.

That being said, don't limit your potential trades on Kroger here to just the remainder of what looks like a good bullish move. The pullbacks from the peaks are also great, trade-worthy moves as well. Just make sure those pullbacks are well-developed before taking that bearish/reverse shot.