JPMorgan Earnings Preview: How the Chart Views the Stock 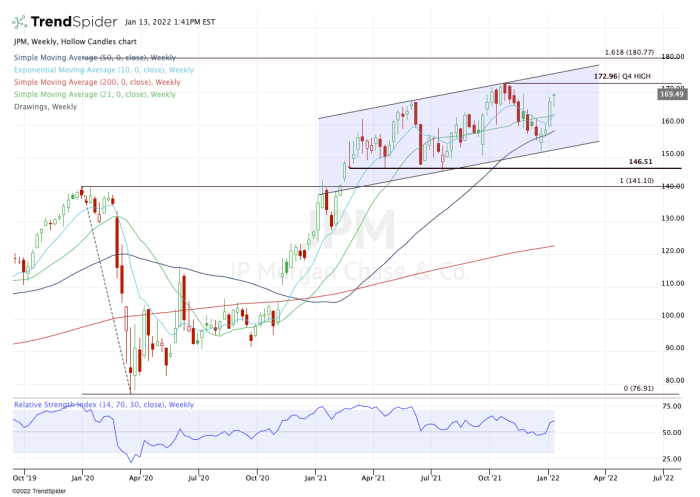 -- JPMorgan will report earnings before the open on Friday. With financials trading well, bulls are hopeful for new highs. Here are the levels to know. --

Delta Air Lines (DAL) unofficially kicked off earnings season by reporting before the open. Those shares are up on the day and investors are hoping it's the start of a solid couple of weeks.

The companies are reporting at a time where bank stocks are trading pretty well too.

While the Federal Reserve is talking about raising interest rates and putting many stocks under pressure, bank stocks have held up pretty well. Of course, it makes sense as higher rates make the banks more profitable.

As long as the markets don't get crushed, rising rates could be a huge catalyst for the bank stocks. One analyst believes 2022 should be a big year for the group.

Let's hope they start on the right foot, and that starts with earnings.

Weekly chart of the JPMorgan stock

While the rest of the market is searching for direction, JPMorgan stock is working on its fourth straight weekly gain. It's also above all of its major weekly moving averages.

The 50-week moving average was solid support in late December, while the bounce helped create an upward channel.

Obviously, earnings reports create a sort of binary event. Good results can put new highs in play, while an ill-received report could send a stock lower.

On a bullish reaction to earnings, let's see how JPMorgan stock handles the $173 level, which is the fourth-quarter high.

On the downside, my key focus would be the 10-week and the 21-week moving averages. Put simply, Do bulls step in and defend the stock down here if JPMorgan pulls back that far?

If not, support is followed by the 50-week moving average, then channel support.

Over the years, these stocks have had a tendency to rally on earnings, then fade after the open. That doesn't mean it happens every quarter, but it's a trend I have noticed over the years with these stocks.