Is Nvidia About to Fly Higher? 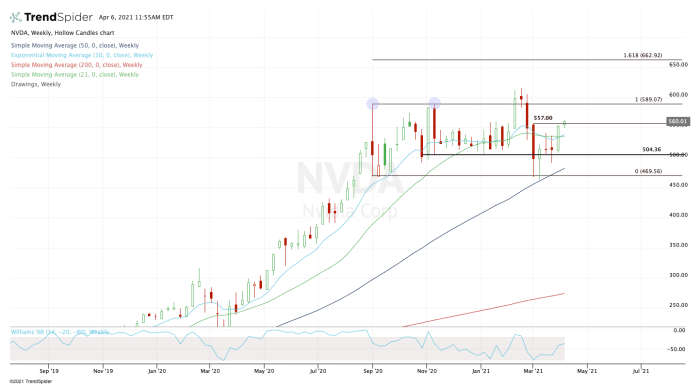 Nvidia (NVDA) has been a rewarding investment but a frustrating trading vehicle.

However, shares have put in a solid rally lately as the stock works on its fourth straight daily gain and its sixth rally in the last seven sessions. And its one down day during that stretch? A declined of 69 basis points.

That said, the stock is trading at the same level it was at the beginning of September. Advanced Micro Devices (AMD) has been going through a similar stagnation.

That's despite the giant semiconductor shortage we've seen in video games, automobiles and other industries.

Almost a month ago, I discussed Nvidia looking like it had bottomed. It soon ran into the resistance we were looking at and has since powered higher. Let's get a fresh look at this stock as the charts have been setting up nicely.

Above is a weekly chart of Nvidia, highlighting its strong bounce off the 50-week moving average. While it looked like Nvidia was breaking down below the 200-day, this moving average was here to lend a bounce.

Shares initially struggled with the flatlining 10-week and 21-week moving averages, but the stock powered through these measures during last week's holiday-shortened trading stretch.

Not only are we pushing higher off last week's gains, but Nvidia stock is now giving bulls a monthly-up rotation by clearing the March high at $557.

After such a quick bounce, Nvidia stock is susceptible to a pullback. In that event, let's see if the 10-week and 21-week moving averages - which were resistance last month - act as support.

If so, the bullish move remains intact.

The longer Nvidia stock can hold up over $557, the better it looks. Specifically, it opens the door to $589, which is the September high and has been resistance for several quarters now.

The one exception to that observation was February, when shares pushed through resistance and ran to $614.90.