How to Trade Tesla After It Beats Delivery Expectations 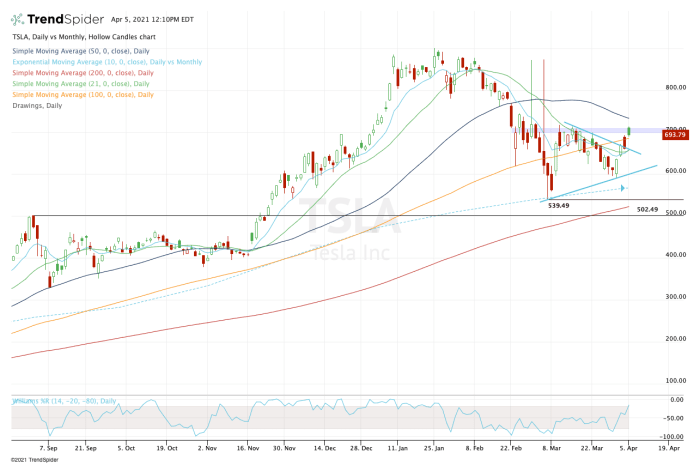 - Tesla doubles its first-quarter production results year over year and shares vault higher on the news. The stock's not out of the woods yet though -

Tesla (TSLA) was in focus Friday after the company announced its first-quarter deliveries. However, the stock was not in focus.

Due to a market holiday, U.S. stocks didn't on Friday. However, investors didn't forget about the automaker over the weekend. Shares have risen about 5% on Monday and were trading just below $700.

The company delivered 184,800 vehicles in the first quarter, up more 100% year over year and up 2.4% sequentially. It also cleared consensus estimates of roughly 177,000 vehicles.

The news resulted in a strong upgrade, with Wedbush analyst Dan Ives raising his price target to $1,000 a share.

Ives also had positive comments on Ford (F) and General Motors (GM) as the two automakers continue to advance their electric plans.

Will this be enough to put Tesla shares back in a bull trend? Let's look at the chart.

When we look at the daily chart for Tesla, the stock did a great job firming up around $600 last week.

Shares continued to hammer off that level, refusing to retest the 10-week moving average and the prior March low at $539.49.

We had a mixed session prior to Monday's, where Tesla popped above downtrend resistance and the 100-day moving average, but closed below both as bulls lacked confidence ahead of the long weekend and deliveries report.

The price action is much better with Monday's move. However, we still have Tesla struggling at a key area, as the $700 to $715 zone has been resistance since late February.

Below those marks could put uptrend support on the table, followed by the $600 level. If tech stocks begin to find some momentum, Tesla already has the good news it needs to go higher. Let's see if bulls can harness control of the stock from here.