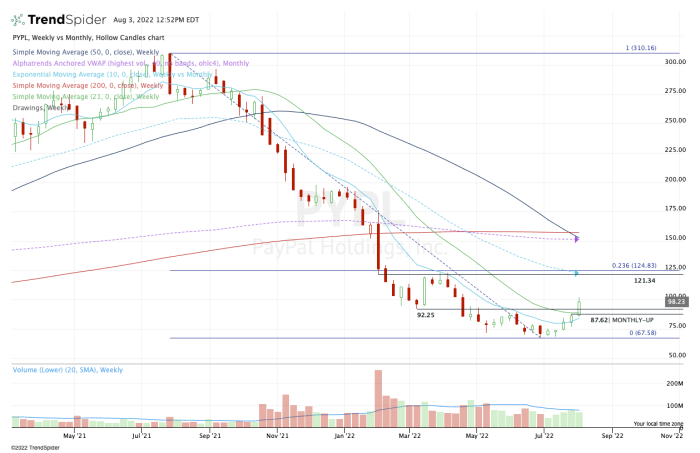 -- PayPal stock is rallying on better-than-expected earnings. Here's what the charts say now. --

Shares of PayPal (PYPL) are climbing about 10% in Wednesday's session, and for long-term bulls, it's a welcome relief.

The cause of much of PayPal's pain over the past few quarters has been earnings. Now it's the bullish catalyst for today's action.

The company delivered a top- and bottom-line beat for the second quarter and announced a $15 billion buyback plan.

It's worth noting that revenue guidance for next quarter and the full year both came in shy of estimates, but investors don't seem to care. The rally in SoFi Technologies (SOFI) is also likely helping sentiment.

At today's high, PYPL shares were up 50% from the June low. But the payment-tech specialist's stock was still down 67% from the all-time high in July 2021. That just goes to show much pain this stock has been subject to.

In all, PayPal stock suffered a peak-to-trough decline of 78.2%. The question bulls want answered is: How much more upside could we garner?

After a deflating decline, PayPal stock based between $67 and $70 throughout June and into July. But it's had a pep in its step for a while now, working on its fifth straight weekly gain.

Amid that move, the shares have cleared the 10-week and 21-week moving averages, rallied through multiple months of highs and even reclaimed $92.25, which was a prior support area turned resistance.

Now backing off the $100 area, investors want to know what's next.

Bulls would love to see PayPal stock stay above $92.25, as well as the 10-week and 21-week moving averages. If it can do so, it marks a stark change in character for a stock that declined in eight of 10 months before bottoming in July.

They'd also like to see it take out $100 and continue higher. If we get a continued rally in the stock market - and especially in tech and growth stocks - it puts the $120 to $125 area in play.

In that zone we find a prior support level at $121 turned resistance, along with the 10-month moving average and the 23.6% retracement (as measured from the 2022 low to the all-time high).

This is a key zone for the stock. But if it ultimately can push through this zone, $150 is the next obvious upside target.

On the downside, a break of $87 does not bode well for the stock. That could put $75 to $77 in play before a potential retest of the lows. The bulls are hoping that's not in the cards.