GE Stock: The Bulls Are In Control ... for Now 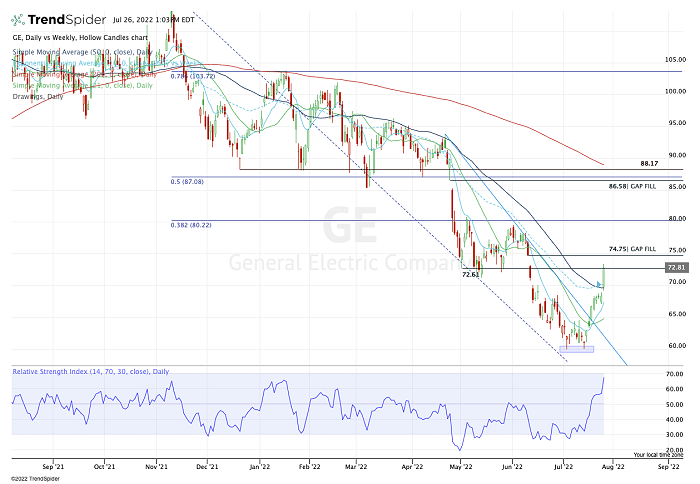 -- GE stock is rallying for an eighth session. How long can it continue to gain? --

General Electric (GE) shares are rallying on Tuesday, up about 5.7% and trading near highs. If GE stock closes in the green, it will mark the stock's eighth straight daily gain.

In that span, we've seen the stock rally more than 20% and reclaim several major moving averages, including the 10-day, 21-day and 50-day.

Driving the shares today are the company's better-than-expected earnings results.

GE reported second-quarter non-GAAP earnings of 78 cents a share, nearly double what it earned in the year-earlier quarter and more than double the analyst consensus estimate of 38 cents.

But the guidance is perhaps the most interesting portion of the report.

Management still expects to earn $2.80 a share to $3.50 a share, as it stated in January. But GE expects the figure to come in near the lower end of that range. Additionally, management trimmed its free-cash-flow guidance.

The outlook might not be great, but we're seeing the stock rally, a rather bullish development. We saw something similar with Netflix (NFLX), which reported less-than-stellar results but has seen its stock trade higher since the news.

Two weeks ago, GE stock looked rather vulnerable as it approached the $60 mark. Instead of breaking down, though, it bounced off this level, giving the bulls a double bottom to work with.

That ultimately kickstarted a strong rally, which as I noted has now thrust the stock back above its short- and intermediate-term moving averages.

The 10-week moving average was notable resistance last month, but now GE stock finds itself healthily above this measure. If the stock can stay north of $70, the charts look pretty constructive for investors.

In addition to holding $70, I would also like to see GE stock hold above the 10-day moving average and see this measure turn into active support.

On the upside, $72.50 is a key zone. This level was support in May before a large breakdown rocked GE stock in June. That's as the overall market came under immense selling pressure as well.

I expect the latter to be notable resistance if and when GE stock gets there. That zone is marked by the 50% retracement, the gap-fill level near $86.50 and prior support at $88.