-- The stock market is technically in one of its most bullish periods of the year, but after Friday's pullback, investors are worried. Here's how to proceed. --

There were some caution flags coming out as we entered the holiday-shortened trading week.

The major indices - particularly the Nasdaq - had bearish divergence on the charts, while market breadth was not that impressive.

Admittedly, the market was making new highs, but the action below the surface was not that good.

Simple sector rotation was propping the market up, while some of the big names like Apple (AAPL) did the heavy lifting.

Overnight traders saw the Dow futures down more than 1,000 points at one point, while the S&P 500 futures were down about 140 points or close to 3%.

With Monday's strong bounce underway, where does the market stand now?

Daily chart of the SPY ETF 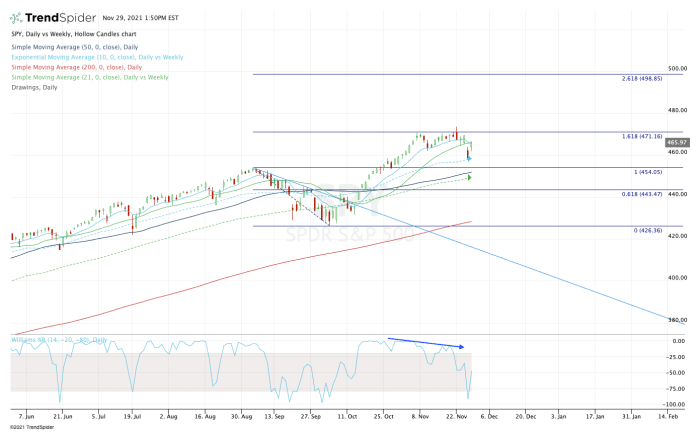 The chart above looks busy, but it's actually quite simple.

On Monday Nov. 22, the SPY tried to rotate higher and for a moment, it did. It hit new all-time highs on the day, as did the Nasdaq.

That move came as Jerome Powell was renominated as Fed chairman. However, the gains quickly reversed, causing some instability in the market.

While the SPY held its short-term moving averages, the poor breadth, sell-the-rallies reactions and bearish divergence (highlighted on the bottom of the chart) were taking a toll.

Then we gapped lower on Friday and traded near the lows at the close.

Traders not using multiple timeframes likely missed that we traded down into the 10-week moving average.

Now pressing higher on Monday, bulls are feeling good. However, it's vital that the SPY reclaims the 10-day and 21-day moving averages.

If the bulls can get a daily-up rotation on Tuesday - meaning the SPY clears Monday's high - they may very well be back in control moving forward, putting $470 to $471 and higher back on the table.

Daily chart of the QQQ ETF

In this case, the bearish divergence was more pronounced, while the QQQ was in a stronger trend than the SPY ETF.

Now above all of its daily moving averages, bulls are in control and it's up to them to keep the Nasdaq moving higher into year-end.