Buy or Sell Microsoft as It Eyes Stake in ChatGPT Owner OpenAI?

-- There are some positives, but the short-term trend for Microsoft stock is a bit concerning. Let's look at the chart. --

Microsoft  (MSFT) has been in the news quite a bit, and the software stalwart's shares continue their volatile price action.

Most recently, Microsoft stock was in focus due to reports about a potential investment in ChatGPT parent OpenAI.

The new AI program has swept across the internet, drawing everything from casual interest from one-time users to apparently multibillion offers from megacap tech.

The reported deal would value OpenAI at $29 billion and ultimately lead to a 49% stake for Microsoft.

While Microsoft would use the deal to help fuel growth, others speculate that it could  also be in an effort to bulk up its battle with Alphabet's (GOOGL) (GOOG) Google.

The news lined up with a multiday pop in Microsoft stock, but it's hardly back in a bullish trend. Let's look at the charts. 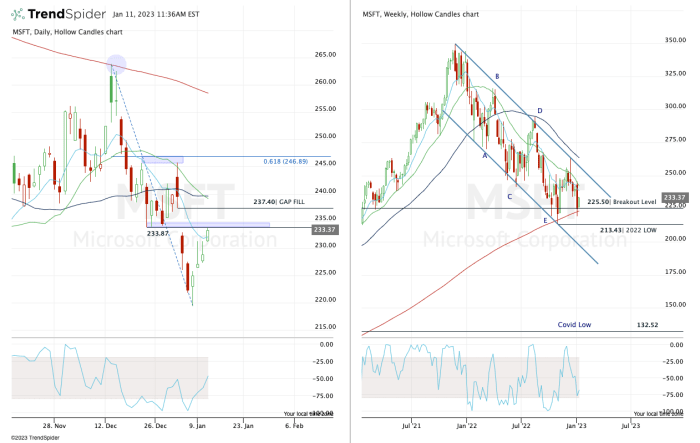 The chart above shows the daily price action on the left and the weekly action on the right. In some regards, there are certainly some positives.

Perhaps most notable is that Microsoft stock put in a higher low and found support at its 200-week moving average. It also comes near the prior breakout level of $225.

On the downside, Microsoft shares remain in a downtrend and downward channel, which is highlighted on the weekly chart.

If we zoom in to the daily chart, you'll see that slippery three-day decline where Microsoft stock fell about 10% from peak-to-trough.

Over the past few sessions, the rally is sending shares into the declining 10-day moving average and the prior support zone near $234.

This is a key area.

If the trend remains strongly bearish, then this area will likely act as resistance and will leave the recent low vulnerable. If that level fails to hold - at $219.35 - it opens the door down to the 52-week low.

If, however, Microsoft stock is able to push higher, it opens the door to the gap-fill level at $237.40, followed by a potential rally to the 50-day and 21-day moving averages.

It will either be resistance and keep the current downtrend intact, or it will break and allow Microsoft stock to potentially rally higher.