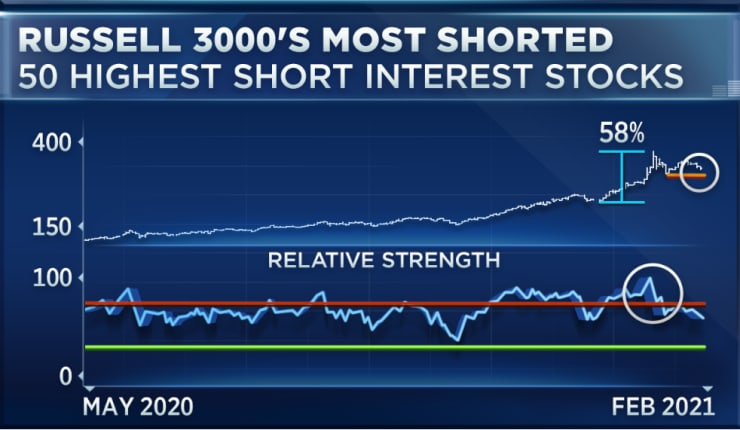 Retail traders are running short on shorts to squeeze.

"There's not that many stocks left to be shorted," said Maley, Miller Tabak's chief market strategist.

Citing an index tracking the 50 most heavily shorted stocks in the Russell 3000, he noted that after massively outperforming the S&P 500 and Russell 2000 in January, it began to roll over, making a lower high a few weeks ago and now heading for a lower low.

"We're running out of stocks that can be squeezed," Maley said. "When you start hearing this stuff on the internet about, 'Hey, I've got another candidate that we can really squeeze here,' there's not many left, so, you need to be very, very careful. There's a lot of other areas in the marketplace where you can make money."

With short interest outpacing the amount of stock available in some of the most extreme short squeezes, regulation has to get tighter, Chantico Global founder and CEO Gina Sanchez said in the same "Trading Nation" interview.

"One of the reasons that I think that regulators have to take a cold, hard look at what's happening is that if short interest becomes this very, very easy mechanism to catalyze stock manipulation, it will damage the ability ... to effectively build capital over time," Sanchez said.

While her firm doesn't short stocks, even names with long-term potential "may not survive" if they can't get past short-term pressure, said Sanchez, who is also chief market strategist at Lido Advisors.

"It makes us very careful about looking at stocks that are heavily shorted," she said. "We might shy away from those knowing that they have the potential to go on a wildly volatile ride before they land at their ultimate place."