Apple Stock is the Last One Standing In Tech: Chart 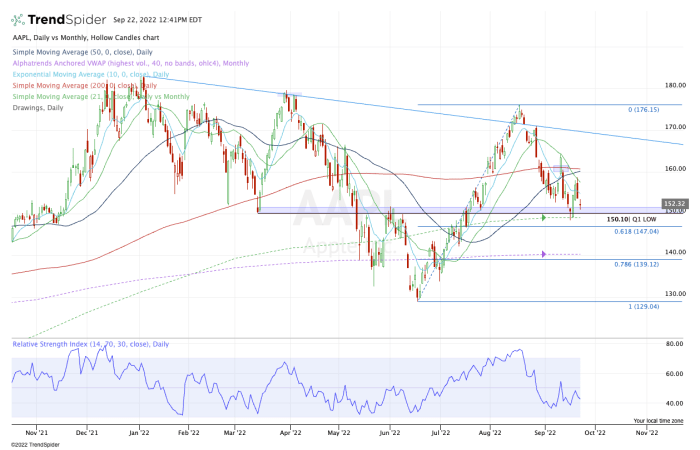 -- Big cap tech is turning lower, but Apple stock is holding strong. Can it continue to buck the trend or will it too succumb to lower prices? --

The recent pain started last week with the hotter-than-expected inflation report, resulting in the worst one-day trading session for the S&P 500 in two years.

While markets tried to hold up amid the recent selling pressure, they broke lower on Wednesday following the Fed's decision to raise interest rates and plans to continue increasing rates into year-end.

At one point this year, Alphabet (GOOGL) (GOOG), Microsoft (MSFT) and Apple were the cream of the crop for mega-cap tech.

But as we're seeing now, Alphabet is no longer on this list as it makes new lows. Neither is Microsoft, yet Apple is holding up relatively well.

Of course, Apple stock isn't the only stock that's holding up, but of the major tech names - absent maybe Tesla (TSLA)  - it's holding up the best.

Apple stock had a very impressive march off the 2022 low, climbing 36.5%. One stretch of that rally included a gain in seven out of eight weeks.

It was enough to momentarily launch the stock above downtrend resistance (blue line), but the bears eventually caught up with it.

Now below all of its daily moving averages, Apple rests above the critical $148 to $150 zone. That has been a key pivot area of support and resistance. It's also where we find the 21-month moving average. This area was solid support last week, but notice how Apple stock continues to hold above last week's low - something the market and many other stocks are not doing.

On the upside, rallies into the $157.50 to $160 zone have been getting sold for the last three weeks. That needs to change for bulls to enjoy a sustainable upside push.