AMD Earnings Trade: Here's What to Do Now 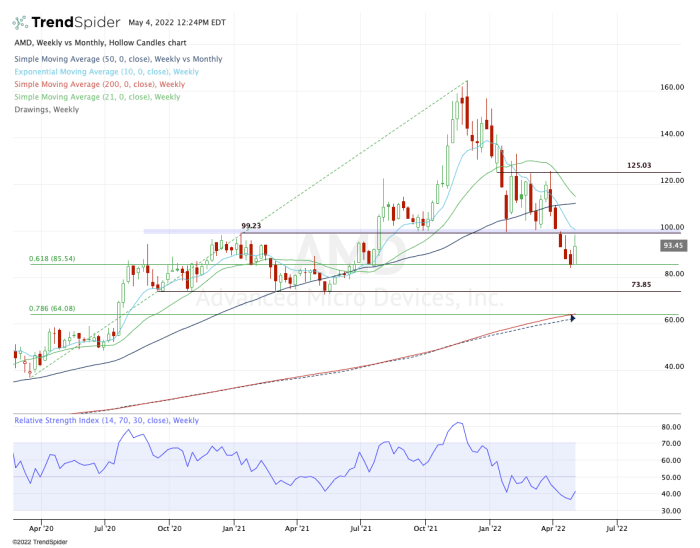 -- Advanced Micro Devices stock jumped higher on earnings but is losing steam in the session. Here's how to trade AMD stock from here. --

Shares of Advanced Micro Devices (AMD) are fading from Wednesday's high, but are still up about 3% after the company reported earnings on Tuesday evening.

The other day, TheStreet asked if AMD and Nvidia (NVDA) can deliver and that's exactly what AMD did last night - it delivered. Nvidia won't report earnings until late May, but AMD's report bodes well for the company.

The company beat on earnings and revenue expectations and provided a better-than-expected outlook. Management's outlook and discussion of its business painted a rather bullish picture.

We've also heard plenty of positive commentary from other semiconductor companies. I don't know how the market will treat these stocks and AMD going forward - after all, the stock is already fading pretty far on the day - but it's hard to argue that AMD's business has momentum.

Will that eventually translate to momentum in the stock price?

The $100 area was a major breakout zone in 2021 and acted as strong support in the first quarter of 2022. Without much surprise though, this support zone failed in April as tech and growth stocks came under strong selling pressure.

On the plus side, AMD stock held the 61.8% retracement amid the recent decline, finding its footing near $85.

Unfortunately, its rally back toward $100 and the declining 10-week moving average was met by sellers. The stock topped out at $98.28 this morning, up 7.8%.

From here, it's not an easy one to navigate. Those who want to be long after a solid report have every right to be. However, they need to keep an eye on the $85 level, particularly if the selling pressure in the Nasdaq persists.

On the upside, $98 is now a key area. Above that puts the all-important $100 area in play and the declining 10-week moving average.

If AMD can push through that area - likely in combination with a market-wide rally - it opens the door to the $112 to $115 area. There AMD stock finds the 50-week and 21-week moving averages.