Alphabet Stock Rallies After Job Cuts. Here's Where It Can Go Next. 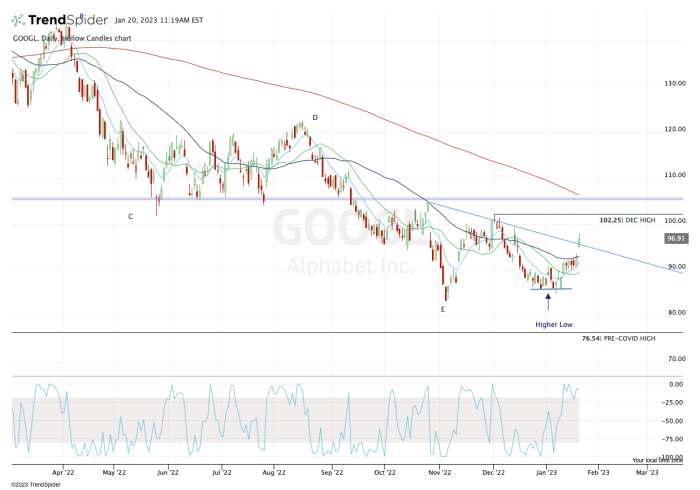 -- Alphabet will cut about 12,000 jobs and the stock is rallying on the news. Here are the key levels to know right now. --

FAANG is in focus on Friday and it's not just because Netflix (NFLX) is rallying after reporting earnings.

The attention is also on Alphabet (GOOGL) (GOOG), which will reportedly lay off roughly 12,000 employees.

Shares of Alphabet are up more than 4% at last check, and at the session high, the shares were up almost 5.5%. The moves follow Thursday's 2.2% gain amid a marketwide decline.

Now that the stock is up 13% from last week's low, bulls are wondering just how much gas is left in the tank.

While Alphabet stock hasn't traded all that well over the past 12 months, let's see whether today's action could be a step in the bulls' direction.

With Friday's rally, Alphabet stock is breaking out over downtrend resistance (blue line). While it will need a strong close, this is clearly a bullish development. That's particularly true as the shares nearly retested the 52-week low in early January.

Instead of retesting the lows, though, the stock put in a higher low, a bullish technical development.

While the stock chopped below the 50-day moving average this week, yesterday's relative strength vs. the overall market was impressive.

Today's gap-up acts as follow-through to yesterday's action and gives Alphabet the potential to push up toward $100. That level has been resistance over the past couple of months, but if the stock can get that far, the December high isn't all that far away at $102.25.

Above $102.25 creates a monthly-up rotation, but bulls must be careful as the declining 200-day moving average looms near stiff resistance at $105.

Without getting too ahead of our skis, it's worth pointing out that a breakout over $105 could set the stage for a rally back to $120.

On the downside, a stock that's struggled this much is always on watch to fill the downside gaps. Friday's gap is down near $93.60 and that could be a potential downside target if Friday's gains are unwound.