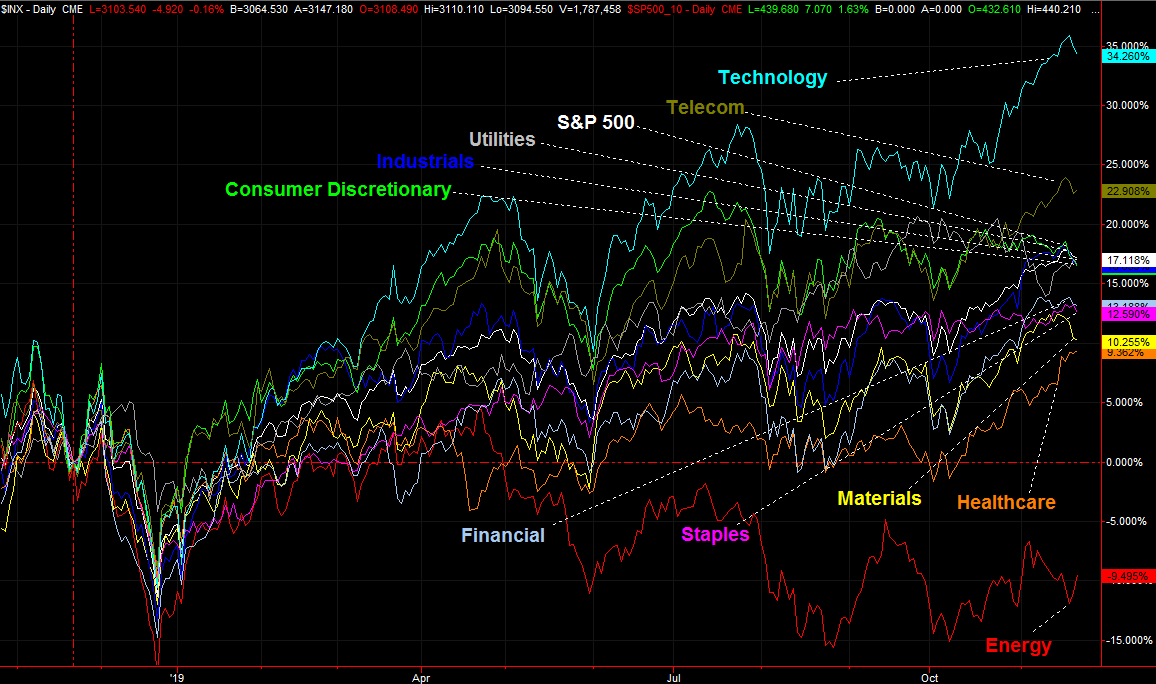 It was difficult to ferret out as recently as a week ago, and it's still not crystal clear. But, broadly speaking, a couple of sector-based trends are developing. Several other sectors are just coagulating.

For the past twelve months, technology is in the lead... a lead these names, led by Apple (AAPL), have had since June. Up 34.3% for the twelve-month stretch though, and with some other key names besides Apple now starting to struggle, it's just possible the tech sector's nice move could invite profit-taking to the benefit of other groups.

One of those other groups is the energy sector. Since May, every time it looked like it couldn't get worse, it got worse. That is, until October. Last month's low wasn't quite as low as August's low. We've yet to see a higher high, but if this month's low is yet-another higher low, we could see that higher high soon enough. There's certainly some room to recover, with the group's 9.5% loss since the middle of last November makes it the worst performer for the timeframe.

It's the "in the middle" sectors that are of the most interest right now, however. Namely, after a rough 2019, healthcare stocks have been on a tear.

They've not yet lapped other sectors' performances, remaining in ninth place out of ten for the past twelve months. But, they're the only group besides energy stocks to make forward progress this week. That counts for something.

One other group worth pointing out even if not yet handicapping is telecom stocks. They've emerged as the second-place leader since last November. While that strength is enticing, it's not yet convincing.

Sector rotation trends are important to examine simply because a stock's sector can greatly impact its overall performance, for better or for worse. An estimated 40% of a stock's net movement can be attributed to group pressure. Sometimes it's easier to spot tradeworthy disparities than it is right now, and other times, the disparities are irrelevant. Right now, seemingly on the cusp of a transition, we should be leery of any apparent sector trends even if they look and feel compelling. On the other hand, we can't simply ignore the budding trends we see. There's a reason healthcare names have been so reliably firm since early October, just as there's a reason utility stocks so quickly fell out of favor then. The trick is determining if that reason is going to remain in place for the foreseeable future.

Whatever the case, we'll update this sector rotation trend chart as needed, when merited.