Rite Aid May Have More Upside Despite Huge Earnings Rally 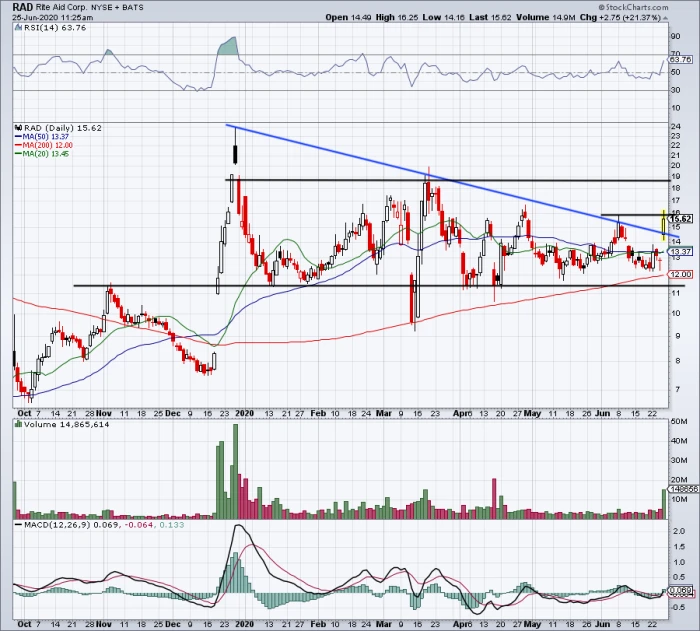 - Rite Aid rallies more than 20% after a top- and bottom-line beat. Despite the move, the stock could have more upside from here. -

As the stock market gyrates between positive and negative territory, Rite Aid  (RAD) shares were firmly in the green. The stock was up about 20% Thursday following its quarterly results.

Rite Aid is hitting its highest price since late April, and at one point was up more than 26%.

The company delivered a top- and bottom-line beat for its fiscal first-quarter results, a difficult feat for retailers in the current environment.

A loss of 4 cents a share came in well ahead of estimates looking for a loss of 38 cents. Revenue grew 12.5% year over year to $6.03 billion, which came in more than $400 million ahead of consensus expectations.

After undergoing a reverse split just over a year ago, many had pegged Rite Aid as another retailer that would bite the dust. Perhaps it still will, but after a decent quarter, the stock is understandably rallying.

I'm not trying to make the case that Rite Aid stock is a slam dunk buy from a fundamental perspective. In that light, both Walgreens  (WBA) and CVS Health  (CVS)  appear more attractive.

However, from a technical perspective, there's no reason for bulls to ignore the price action.

Thursday's action is impressive, as Rite Aid stock reclaims the 50-day and 20-day moving averages and clears downtrend resistance (blue line). This trend has been in play since the highs in December.

What bulls really want to see is a move over $15.84, which is the prior June high. While shares did eclipse this mark earlier in the session, a close above it would be preferred.

Should bulls completely lose control of Rite Aid stock and fail to hold that last zone of support, it puts the March low near $9.25 on the table.

For now though, watch the $16 to $16.50 area on the upside. Above potentially unlocks more upside.