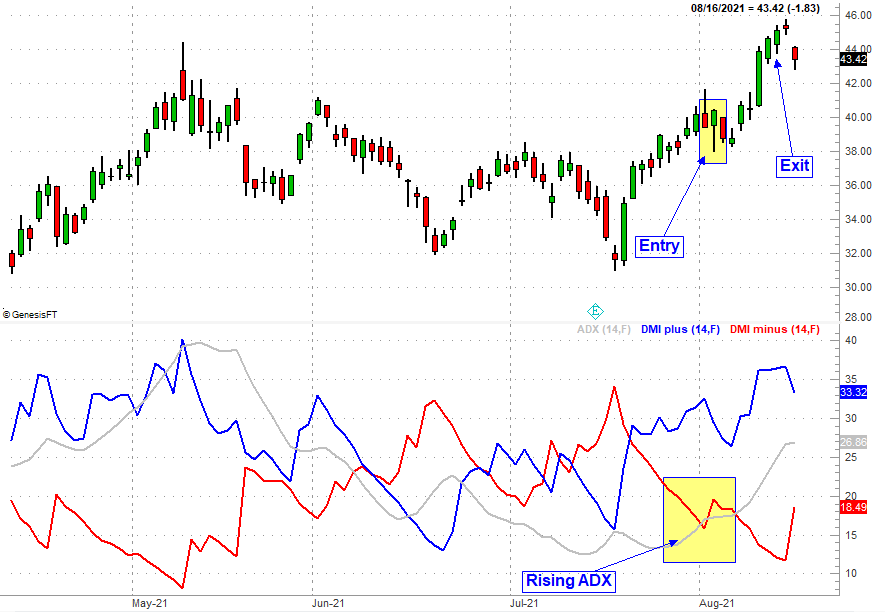 Want to be a better trader? Then learn from real-life examples. Use winning trades as templates for future trades, and pay particular attention to how technical indicators you may not be familiar with unfurl with these trades. You just might end up adding a new trading tool to your toolbox!

With this backdrop in place, let's run through some of the teachable aspects of a recently-closed winner from our Options Swing Trader service.

The underlying stock in question is Alcoa (AA). We stepped into some August monthly 31 calls (AA 210820C31) back on August 3rd at a price of $9.60. But, the far more interesting aspect of this trade entry is the "why," and the conditions behind the pick.

Take a look at the daily chart of Alcoa below. Two things stand out, although only one of them is obvious. That's the shape of the bar on the day we stepped in. The start (or open) was nominal, followed by a sizeable selloff, but then followed by a huge reversal into a big gain and close near the high for the day. This intraday reversal is key! The bears had a chance to up-end the stock after a major runup from the mid-July low. But, the fact that the bulls fought back to rekindle the already-established rally is a huge hint of what traders are thinking... even though that effort cooled just a bit the next couple of days.

The other standout nuance of this chart and subsequent pick is very, very obscured. See the indicator on the bottom of the chart? That's an ADX line, with DMI lines overlaid. While it's not a very commonly used tool, it's a powerful one for traders willing to use it. In fact, its infrequent use is a big reason it works so well. Just like a trade can be too crowded to be meaningfully profitable, if everybody's using the same technical indicators, the less effective those indicators are because everyone's pilling in or piling out at the same time.

If you're not familiar with ADX and DMI lines, here's the quick and dirty explanation.

The DMI indicator is actually a three-component tool. The DMI+ line (blue on our chart) indicates the pace of higher highs for the stock or index in question. The DMI- line (red) indicates the pace of lower lows, though understand that the DMI- line moves higher as the stock or index moves lower. In other words, it's a "strength of the downtrend" measure. You'll notice most of the time, the DMI+ and DMI- lines are moving in opposite directions, as you would expect; higher highs tend to coincide with higher lows, and lower highs tend to coincide with lower lows.

In other words, those two lines are generally supposed to move in the opposite direction.

The real star of the show here, however, as the ADX line (gray) you'll see moving between the DMI+ and DMI- lines.

In simplest terms, the ADX line is a moving average of the rolling difference between the DMI+ and DMI- lines. It smooths out otherwise-erratic data into a useful, trade-prompting trend. In this case, when the ADX line is rising, the trend is pretty well confirmed whether that's a bullish or bearish trend. Conversely, when the ADX line is falling, the underlying stock's trend is weak... at least as measured by inconsistency in the day-to-day changes in highs and lows.

This is a key detail for us, and the Options Swing Trader service in particular. Part of the algorithm for finding these trades is based on the ADX line. We want it to be rising, coming out of a pullback to show us when strong trends are just starting to bud. As you can see on the chart above, the ADX line was on the rise leading into the entry; the big bullish intraday reversal on August 3rd was just an opportune time to get in during what was likely to be a temporary lull of the bigger-picture advance.

It worked out, clearly. Although it got off to a slow start, by August 12th the stock had gained more than four points. We sold the August monthly 31 calls that session at a price of $14.10 for a gain of nearly 50%. Not bad for a couple of weeks' worth of work!

It's a great example of how ADX and DMI can help you time trade entries, but help you find trades you may not have otherwise found at all. The Options Swing Trader service scans a large universe of stocks for (among other things) for the right ADX parameters. [Note that for our example above we're using parameter lengths of 14 days, but that's not the actual settings we use for the Options Swing Trader service; this image is for illustrative purposes.]

The big take-away here, however, is the combination of two different and two subtle, nuanced indicators. Getting that "second opinion" can make a world of difference.

In any case, if you'd like to learn more about the moderate-risk Options Swing Trader service and how the chosen indicators work better for the deeper-in-the-money options it uses, check it out here.