Early this month we explained how shares of grocery store chain Kroger (KR) appeared to have more upside ahead. Although the purpose of that commentary was to point out how the stock's history could help us figure out its future, certainly a few people borrowed the idea for a real trade too. And, that's fine. You secured about three points worth of movement there, and if you played your hand perfectly, you scooped up nearly four points worth of action.

Regardless, now that Kroger has reached the suggested target, it's time to (1) point that out, and (2) point out the next likely move. Only this time, we're going to use a hypothetical option trade to make the play. The purpose this time around, however, is to illustrate the approach and thought process for picking an option trade.

This is the most recent daily chart of Kroger. As you can see, shares did indeed end up moving all the way up to the upper boundary of the long-term trading range framed in blue; that ceiling is right around $50.00, versus the price of $46.16 back on the 4th when we took our first look and made the bullish call. 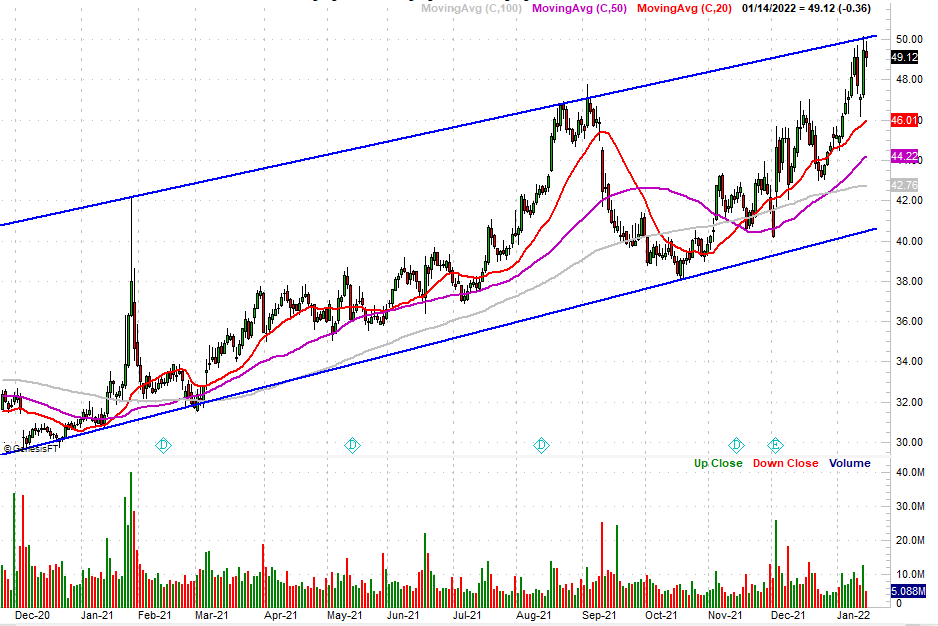 Now that we're here -- given the stock's history -- we've got good reason to believe a pullback is in the cards. If history repeats itself, a slide back to the lower boundary of the trading range is in order. It's currently around $40.70, although by the time it could be brushed it'll probably be closer to the mid-$41/upper-$41 area. This version of the same daily chart makes it easier to see this. It also makes it easier to see (again, based on the chart's history) the stock is apt to be reaching that technical floor sometime in late February.

This is no small matter. This is, in fact, exactly the kind of information you need to know when picking a particular option to trade.

See, no two options are alike. Aside from different prices, or costs, they each have different "greeks" that will impact their value if-and-when a stock reaches its most likely target. In this case, a different put options on Kroger will yield different degrees of change as KR shares peel back to the $42-ish area. Your job as a trader is to optimize your risk and reward relationship. To do this, however, you have to know what a put option's going to be worth at a certain point in time at a certain price.

This isn't easy to do. Nobody can do this sort of math of the top of their head. The only viable approach is to make a matrix of all your choices based on the current price, and the likely price in the future.

That's what our table below does, using some established parameters. Chief among those parameters is the presumption that Kroger shares will be trading at $42 apiece on February 22nd . We're also limiting our expiration timeframe to options expiring on February 25th, since we know already know that's the expiry with the optimal balance of delta (potential change in price) and theta (time decay). In any case, this is where we are today...

If you need some help putting this in perspective, here's the percentage-change breakdown.

Unsurprisingly, the cheapest put option -- the $46 strike -- gave us the most bang for our buck. Don't get too enamored though. That cheap put option also gave is the most potential for loss. Here's where we would have been as recently as January 31st if Kroger didn't end up moving lower, and instead continue to inch higher to hit $50.00 per share. It doesn't take much (or very long) for things to get ugly.

This sort of adverse move, of course, would require us to pull the plug on this trade before things got any worse.

We're obviously using software to work out all of these if-then scenarios. You should do the same. And, while we have a premium/paid tool to so do, you don't have to spend a penny to do the same for yourself. There are plenty of free tools online, even if you don't have all the bells and whistles; some of the free ones do have all the bells and whistles.

The real value of this exercise, however, is two-fold.

One of them is to make the point that you have to have some idea of where an underlying stock is headed -- and when -- if you're going to establish price targets for them. Arbitrary targets don't always do you a lot of good, especially when this sort of so-called "position" trading is being employed rather than a trade meant just to capture a couple of days' worth of volatility.

The other point of the above hypothetical exercise is to illustrate the importance of the greeks, and delta and gamma particular.

Go back up to the very first matrix that looks at the Kroger put options in question as of today. The most explosive, profitable put option at the time wasn't the $46 strike. Its delta was a modest 0.24 at the time, and the lower gamma of 0.06 suggests its delta was the least likely to move for the better. On paper, the $51 put gave us the most responsiveness, with a delta of 0.53, and a better gamma of 0.08. [Gamma is a measure of how rapidly delta changes as an option moves deeper into the money.] Yet, given enough movement from the underlying stock, the delta on the $46 puts caught up with the deltas of the other put options.

The moral of the story is, there's always more to the story that is not only not apparant with the greeks, but evenl a little counterintuitive.

This isn't to say one should simply ignore the greeks. Indeed, for certain esoteric option trades, shorter-term trades, and volatility-driven trades, greeks are monumentally important. For longer-lived, bigger-target types of option trades though, you have to know that the greeks are going to change significantly during the holding period of the trade... even if that holding period is only a few weeks. This is why you really have to compare all the prospective scenarios of a trade, as we have with Kroger above.

Now let's see if our suspicion is right, and if Kroger shares start to move lower. Making the right directional call is still the most important task, after all, when you're making single-option position trades.