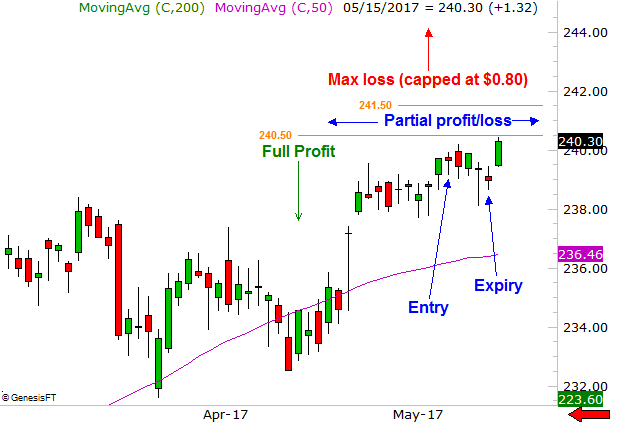 Last week, our Index Options Timer service locked down a 26% gain on a credit spread entered on the S&P 500 SPDR Trust (SPY) by writing a credit spread and holding it through Friday's expiration; we'll take a 26% score for five days work as often as the market is willing to give it to us.

But, in that it was such a fruitful trade that illustrates the idea -- and power -- of credit spreads, it would be time well spent just walking you through the strategy and thought process of this particular trade.

Credit spreads are somewhat unconventional in that the idea is to let them expire worthless rather than cash in on a big move that inflates the price of an option. With a credit spread, we're net sellers of options at the onset of the trade, and we let time decay (or theta) do the work for us. Ideally, we won't have to do anything to exit the trade - the options will simply expire worthless, and we keep all of the proceeds we collected up front.

It all makes much more sense by walking you through the trade.

Though call options are generally a bullish bet, in this case we used call options to make a bearish bet. Our bet was that the SPYders would likely sink lower last week, or at the very least not move meaningfully higher; we could have made money even if the S&P 500 SPDR Trust made a little bit of a gain as long as that gain didn't move any faster than theta, or time decay, was working against the ETF's call option prices.

We can use calls to trade bearishly (though also neutrally) by selling a call option, collecting the money from the sale, and letting it lose value. That's something of a risky bet though, so we can add an insurance policy by buying another call option with a different strike on the SPY. If we're wrong, the option we've shorted will increase in value, but the option we've bought will also increase in value. Our gain or potential loss if the difference, or spread, between the two different strike prices for our SPY calls.

Though we can close out such a trade before it expires, that would almost certainly require us to incur some sort of net-cost to do so; it might even cost us more than $0.20 to do so, meaning we'd suffer a loss of some sort on the position. Remember though, time -- time decay -- is on our side as well as the fact that stocks were overbought and struggling to move higher. In fact, both of these options were losing about 7 cents per day just due to the passage of time.  Based on the chart and the market's reality, this was a low-risk trade.

And, as the chart of the S&P 500 SPDR Trust below shows, this bearish credit spread (or call credit spread) was the right trade. Although SPY didn't tank, it clearly didn't continue rallying. It just chopped sideways with a slight taper as the weekend approached. This translated into a 26% gain on the amount of capital we put at risk with this credit spread trade. Both options expired at the end of the week, worthless, meaning our $0.20 credit (or $20 credit per pair of call options) was ours to keep, free and clear. [It's not a done deal until the trade is closed out and the short leg of the position can no longer be exercised against you.]

Credit spreads aren't as complicated as they may seem, as the above example illustrates using a real-life example. They're also powerful in that they don't require a trader to find a mover; the trader just has to be "not wrong."

On the flipside, there's is a challenging nuance... picking the right strike prices and the right expiration dates. If you pick strikes to close to the current price of the underling stock's or index's price, you run the risk of having the short leg of the spread exercised against you. If you use strikes that are too far out of the money, you may not make enough money to bother with the trade. In the example above we used the second and third closest out-of-the-money strike prices with the closest expiration, but those aren't always the best ones to use.

The best way to learn the nuances of picking the right options is by practicing, or "paper trading." Or, better yet, earn as you learn by signing up for the BigTrends Index Options Advisory service. Many members report the service's trades pay for the subscription cost in a very short timeframe. Go here to learn more.