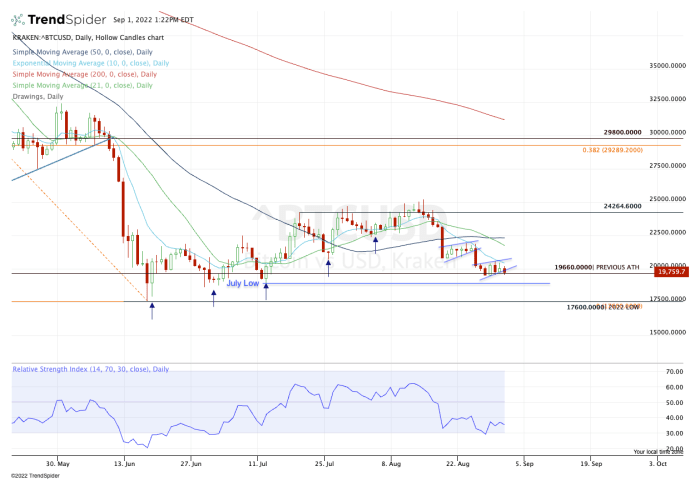 -- Bitcoin is trying to avert its third straight weekly decline. Here's what the charts say. --

Bitcoin prices haven't been excluded from the recent selloff.

Cryptocurrencies proved to trade well in anticipation of high inflation, but it was likely the correlation with high-growth stocks and risk-on assets that powered the run higher.

Bitcoin prices exploded after the 2020 covid-19 selloff but have since performed the way growth stocks have.

Prices fell 75% and bottomed in mid-June, just as many growth stocks did earlier this summer. Now, bitcoin has been moving lower again and some investors fear that a painful crypto winter could be on the horizon.

Last week, bitcoin broke below $20,000 but found its footing shortly after. Now that it's hovering around this level - and currently just below it - let's take a closer look at what could be on tap.

The latter played out, and now traders have seen these active support measures turn into active resistance.

This is a great example of why traders need to be flexible and willing to change gears. They either need to get out of their long positions once the script flips or they have to be willing to get short.

On Aug. 19, bitcoin prices fell 10% on the day, sending it below the 50-day moving average. From there, it formed a bear flag pattern, which broke to the downside. Now it's setting up in another bear flag pattern.

The bulls do not want to see bitcoin break $19,500. If it does, it will thrust bitcoin below the recent low, while keeping it below the psychologically key level of $20,000, as well as the prior all-time high of $19,660.

It will also put it below the August low, technically triggering a monthly-down rotation. Buyers have shown up around $19,000 this summer, but if we get a real flush to the downside, don't be surprised if bitcoin revisits the low near $17,600. Below that and new lows are on tap.

So how can bitcoin go higher?