Gold is rebounding, but trader warns of more downside to come 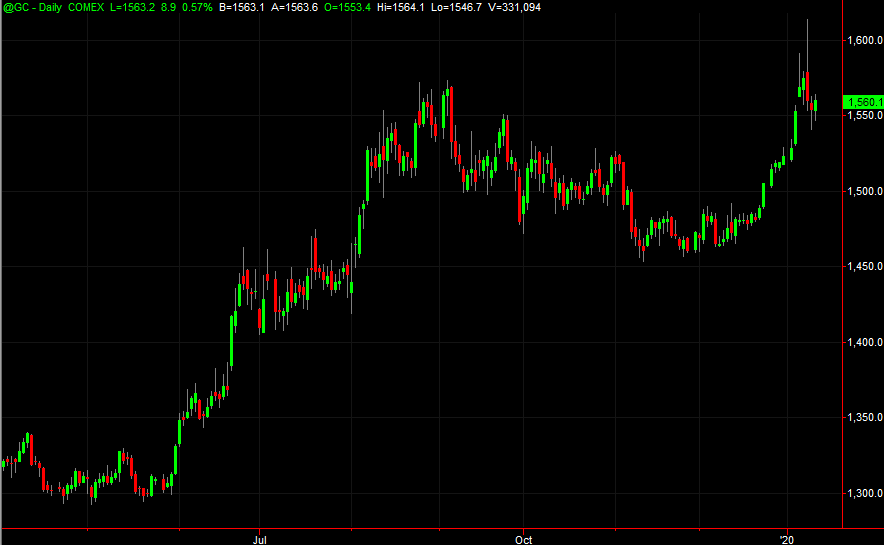 Gold prices are staging a small comeback to end the week.

The commodity edged up to $1,561 on Friday afternoon, reversing a fall seen a day earlier. The yellow metal reached a near seven-year high earlier in the week as investors rushed to safety on increasing U.S.-Iran tensions.

“The resistance in the underlying gold futures is right around the $1,600 region here,” he told CNBC’s “Trading Nation” on Thursday. “We’re seeing a bit of a de-escalation in tensions. It seems to be that markets are calming down here, and we can see the stock market is having an explosive move higher here.”

He adds that bond markets are coming under pressure, giving lift to interest rates, which should also work to pull gold prices lower.

“We get a little bit intermarket confirmation here,” he said.

Gordon says that the GLD gold ETF has recouped nearly two-thirds of its losses from a 2011 peak to 2015 trough. This current level now acts as a “technical ceiling,” he says.

“The other thing that I’ll draw your attention to is the breakdown point in the GLD chart which was right around $150 region so there’s a series of tests of the low. Finally we broke through here, and if we extend that sideways, that failed support will be a newly formed resistance level further corroborating the thesis that we have resistance into $150,” he said.

Gordon executed a put debit spread to take advantage of expected downside. He bought the Feb. 22 expiration $145 strike puts and sold the $135 puts.