FANG Stocks Update: One Of 'Em Has Shrugged Off This Whole Mess 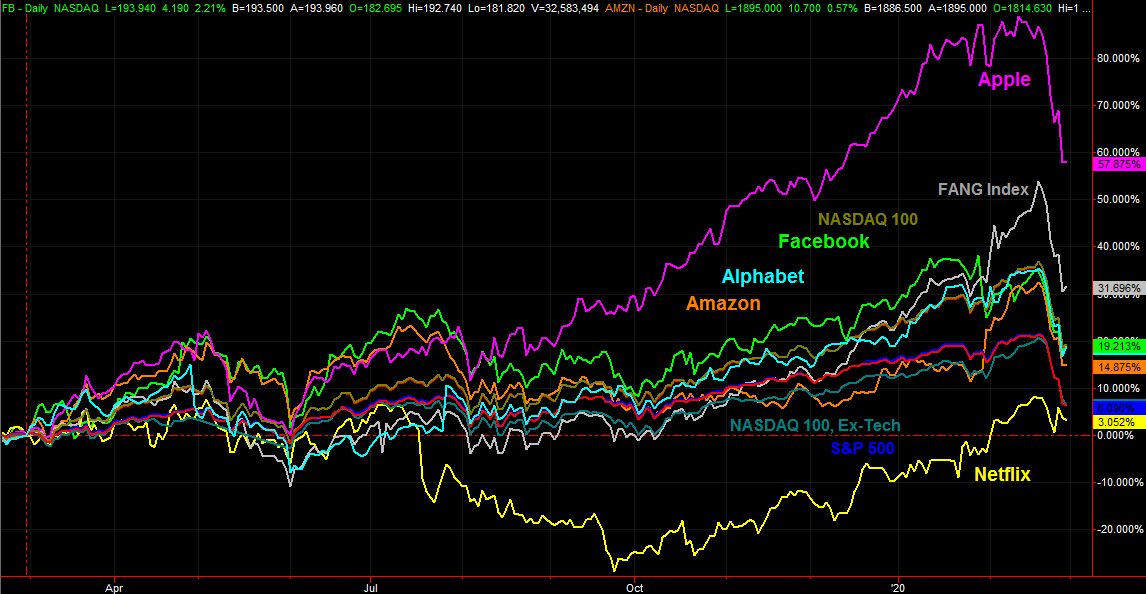 In our last FANG stocks update we warned that these names, as a group, were racing too far ahead of the pack. And, we've pointed out the same with a handful of sector-based and style-based looks of late. Not surprisingly, the overextended names that make up the so-called FANG stocks led last week's tumble. Whereas the S&P 500 fell 11.2% over the course of last week, the average FANG stock cratered to the tune of 11.6%. Apple (AAPL) led the way with a 12.6% tumble. If you count the two final days of the week before -- which is really when the correction started -- the performance disparity gets even worse. The FANG Index is down 14.4% from its February peak, led by Apple with its 15.5% slide. The S&P 500 is only down 12.4% from this month's (record) high.

There's been one oddball, however. That's Netflix (NFLX). It lost less than 3% of its value last week despite coronavirus-mania, and is only down 4.8% from its peak.

What gives? Traders were thinking beyond mere momentum. They were thinking about consumer psychology. Inasmuch as Netflix is a "stay at home" kind of service that might actually benefit from an epidemic outbreak, it was one of the few names the market favored last week. Apple depends on components from China, and assembly in China. Alphabet (GOOG, GOOGL) Google counts on a strong economy to support its ad business as well as its cloud computing ventures. Facebook (FB) is also at the mercy of the economy when it comes to pricing power. And Amazon (AMZN)? It may be the most vulnerable of all to turbulence in China that could spill over into the United States.

The $64,000 question is, of course. now what? Is the worst over, or is more of the same in store for the coming week?

Never say never, but by Friday afternoon it looked like the sellers were exhausted and finally willing to yield back to the bulls, who by the way were completely ok with taking the reins back.

The key clue of that shift is the shape of Friday's bar.... all of them. Despite the opening deep in the red for all of these stocks (except Netflix), they all fought their way back into the black on an intraday basis. When push came to shove as the weekend approached, traders decided there was more risk not being in these trades than there was in being in them. Underscoring that likely bullishness is the fact that, although the broad market didn't do so, four of the five FANG stocks finished the day with gains instead of losses despite the rough start. Of all the names traders and investors alike would want to see drive gains in the middle of a meltdown, it's these market leaders.

The gaping flaw in the analysis/assumption is of course the overwhelming irrationality of traders at this time. The coronavirus contagion is something to be respected, but truth be told, it's not something investors need to worry about as a long-term damper. It's not crimping demand. It's crimping supply. The world has survived worse. That doesn't mean traders are behaving reasonably and rationally though. If another batch of grim headlines surfaces in the coming week, it could easily undermine the glimmer of hope that started to shine on Friday.

Whatever's in the cards, this analysis' focus chart has to be Netflix for one simple reason... and not the reason you're thinking. Yes, it held up amazingly well last week, but in so doing it found support at (and confirmed) a key technical support line. All the key lows going back to September are connected with a light blue dashed line on the chart below, and the stock just kissed that floor on Friday. That may well be good enough to rekindle the bigger bullish tide.

That being said, also note NFLX shares only barely broke above its July peak around $385.60 before sliding lower. That level along with February's highs are the lines in the sand to watch. If the lower of the two is cleared, that's good. If the upper of those two at $393.93 is cleared as well, that's great. It should really cement in place the idea that things are looking good as we move into March. 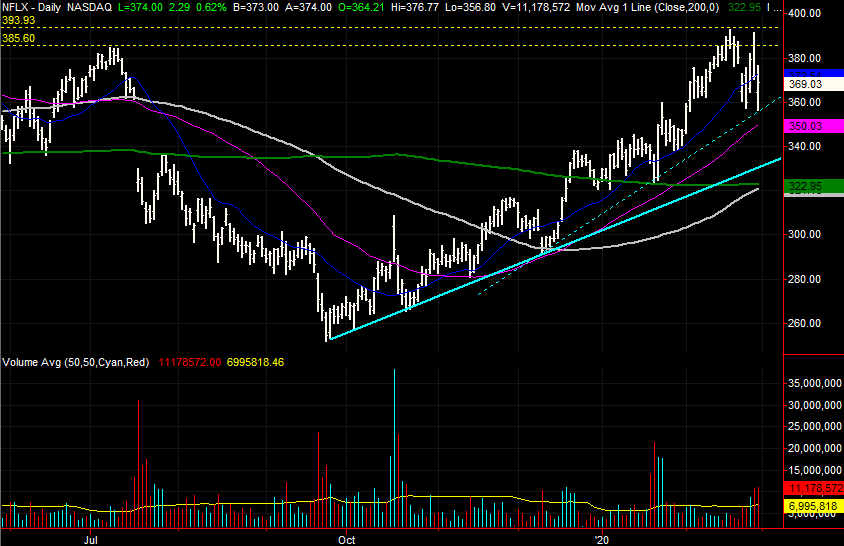 If you'd like to get more out of the market by focusing solely on the market's most tradeworthy stocks -- the FANG stocks -- the BigTrends FANG Options Advisory is for you! Learn more here about how limiting your "trading" universe lets you become an expert in one particular arena.