Is the worst over for the market, as far as the fallout from the coronavirus outbreak goes? Definitely maybe. Stocks certainly made a good showing on Monday when they didn't have to, in response to seemingly good news on the contagion front. Namely, the S&P 500 as well as the NASDAQ Composite made higher highs on Monday, clearing the highs hit a week and a half ago.

FANG stocks have performed well during this time, leading the way. And, Netflix has led the FANG stocks. It's up 27% from the March 16th low, although to give credit where it's due, Apple would be leading the pack had it not had to test lower lows on March 23rd.

Still, obviously the huge lead Apple developed in the latter part of last year has helped it retain its spot as a twelve-month leader. That's the biggest part of the reason FANG stocks have outperformed the overall NASDAQ 100 Index for the same timeframe... with or without tech names. Even so, the ex-tech NASDAQ 100 Index has outperformed the S&P 500 index; old-school blue chips haven't exactly held up or woken up of late.

The daily chart of each FANG component, of each FAANG component (we use Apple and Amazon), puts things in a different light. From this vantage point we can see neither Netflix nor Amazon -- oddly enough -- ever got into too much trouble to begin with. Amazon, in fact, is knocking on the door of record highs, and Netflix isn't too far behind. 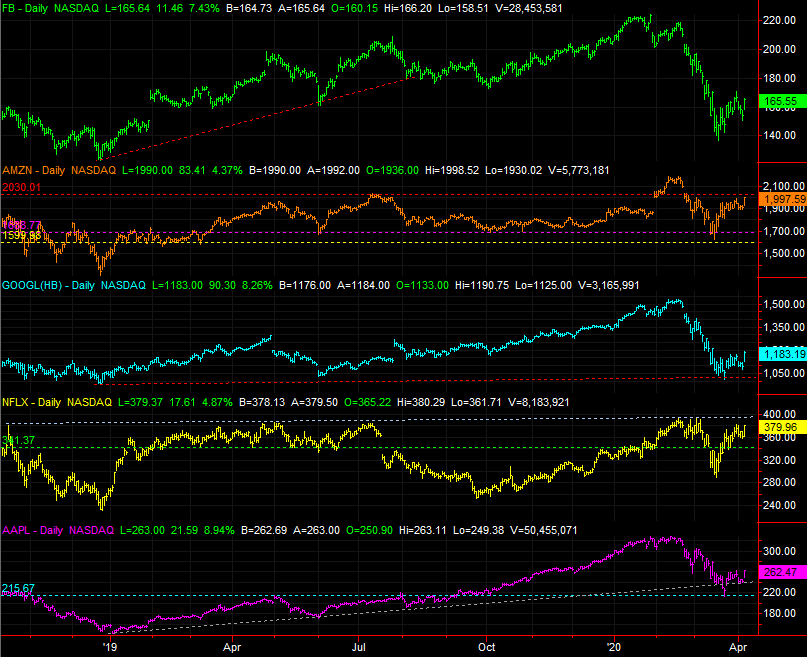 It's Netflix we want to take a deeper technical dive into, and it's not too difficult to figure out why. It's knocking on the door of not one but two key technical ceilings. One is $385.60, and the other is at $393.90. Both are plotted in yellow, and both are made by previous peaks... multiple peaks. Getting above one and then the other could prompt another wave of buying. 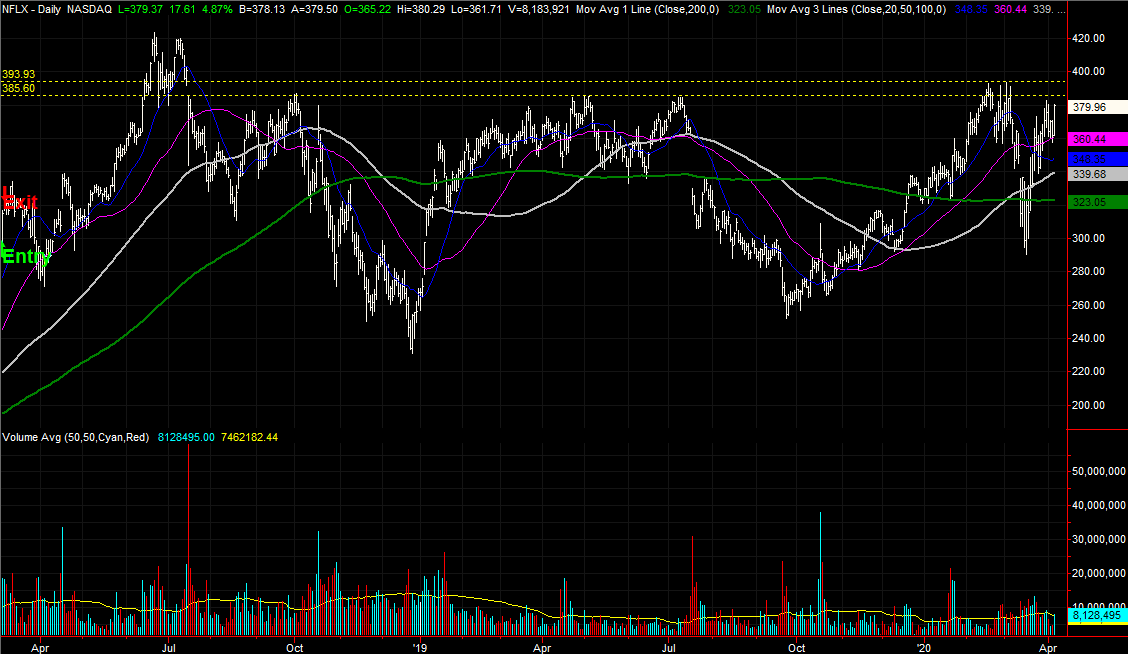 Things are still very much up in the air. COVID-19 is a huge unknown. But, the fact that traders are rushing back into aggressive growth names like the FANG stocks at the expense of more conventional blue chip names says a lot about the confidence traders are gaining again.

Don't dig in too deep here though. These charts are turning into something compelling, but there's a lot of work that needs to be done -- some more certainty to bake in -- before we can fully trust what the charts are saying. But, at least things are moving in that direction.

If you'd like to get more out of the market by capitalizing on the unique nuances of FANG stocks, the BigTrends FANG Options Advisory is for you. Our trading strategies are tailor-made for these actively-traded stocks that tend to dish out oversized moves. Go here to learn more.