Using the TRIN and Arms Index

Another Way Of Looking At Breadth And Depth

We've looked at how breadth and depth can give you early warnings of a new trend.  By 'breadth', we simply meant volume.  For any new trend to be sustained, there has to be at least steady - if not growing - volume.  Similarly, the majority of stock issues have to be moving in the same direction for "the market" to move in that direction.  This is called 'breadth'.

Having one or the other, quite frankly, isn't really enough if you're looking for the big trends. You really want to see both components in place for a market trend.  You should be watching both market volume and the advance/decline data.  We'll just reiterate that this information (especially volume) is one of the best tools a trader has when it comes to spotting a trend shift before  it's well underway.

But there is an easier way.  You don't have to gather four pieces of data, and then plot moving averages of each one and wait for crossovers for both sets.  There is a single-line indicator that incorporates all the same data, and is just as useful as well as just as accurate.  It's called the Arms Index (named after the developer Richard Arms), but you may have heard it called by its more common name - TRIN.  That's short for "TRading INdex".

Like the advance/decline and volume data, the TRIN indicator is exchange-specific.  For today's illustration, we'll be using the NYSE data to calculate our TRIN.  You can also find TRIN readings for the NASDAQ exchange, but we've found that TRIN reading to be a little too volatile to use effectively.  We'll stick with the NYSE for right now.

Before we get into what TRIN 'is', just keep in mind the philosophy of how we apply this information;  what we're looking for here is balance. If the bullish volume is twice as strong as the bearish volume, that's ok as long as the advancers are twice as numerous as the decliners.  Everything would still be proportional.

If the advancers outnumber the decliners by a 2 to 1 ratio, but there is heavier volume on the selling side of the market, clearly things are out of whack - and that's when reversals occur.  So now, let's define TRIN and see how it's used (and then we'll look at why it's particularly troubling right now).

As described above, the TRIN is a comparison of advancing/declining issues and the advancing volume/declining volume.  It was designed by Richard Arms to highlight points in time when there is an imbalance in the advancers/decliners and the underlying trade volume of those advancers and decliners.  We're using the advancing/declining data for the New York Stock Exchange, but a TRIN reading can be calculated for any of the exchanges.  The formula is as follows:

All things being equal, a perfectly balanced Arms Index would be 1.0.  If the advancers or decliners become disproportionate with their corresponding volume, the Arms Index deviates from 1.0.

Of course, the market always eventually finds its natural balance, so when the TRIN levels are highly skewed;  we know a big reversal is probably in the works.  Note that the TRIN reading can stay at 1.0 while the market is crashing or while bullishly running away; all the Arms Index is designed to do is point out an imbalance in the advancers/decliners and the volume behind those advances and declines. TRIN does not necessarily pinpoint the direction of a chart.

It's when the TRIN readings start to fall outside of these ranges (above 1.3 and below 0.8) when the trend is getting ready to shift in the other direction or at times accelerate.  Oh yeah, one more thing - the daily TRIN readings are often too erratic to use by themselves. We normally prefer a 12 day moving average of the TRIN day.  This makes the tool much easier to use.

The first chart is TRIN with Moving Average and the Extreme Range.  Like we said, the raw data is too erratic to use to spot a trend.  To smooth out the data and put it into a useful form, we've applied a 12 day moving average (in blue).  The two dashed lines on the TRIN chart are plotted at 1.3 and 0.85.....the extremes that often are reached right before a reversal or show a strong market trend.

In recent months there's been two occurrences of the TRIN MA reading moving above the range -- the first was in June and the second in August.  Both of these readings were followed by the market trending fairly strongly in one direction over the next 7 trading days or so -- one was a continuation of the market downtrend and the other marked a reversal higher point. 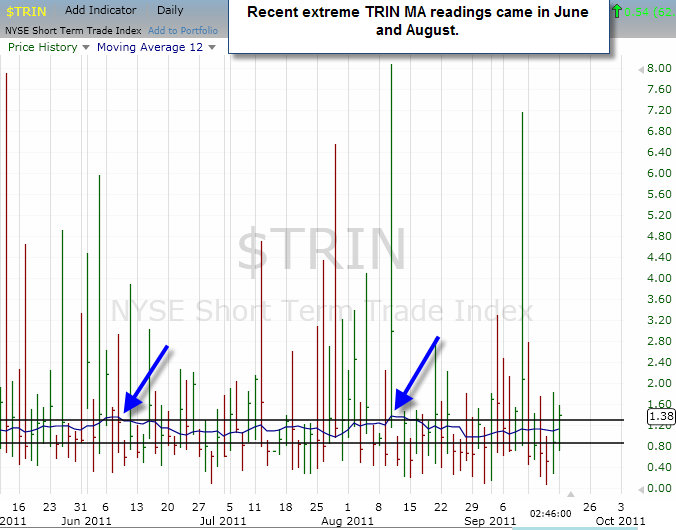 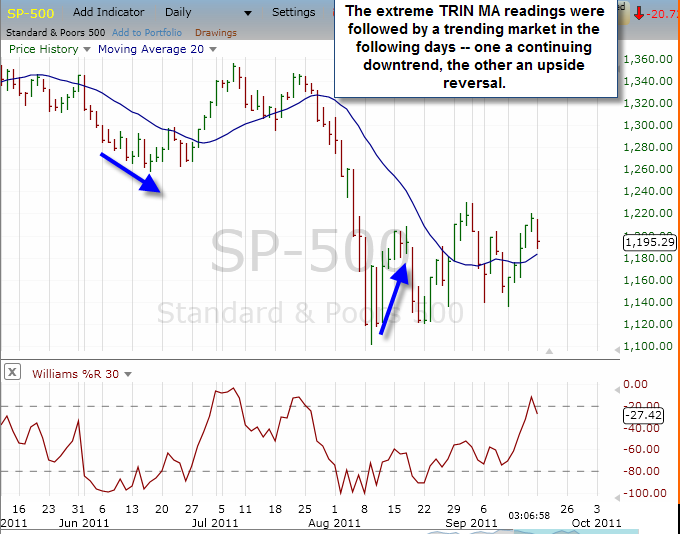 Incorporating volume and market breadth/depth through an easy-to-use indicator like the TRIN or Arms Index offers some food for thought and another tool to put in your war chest.