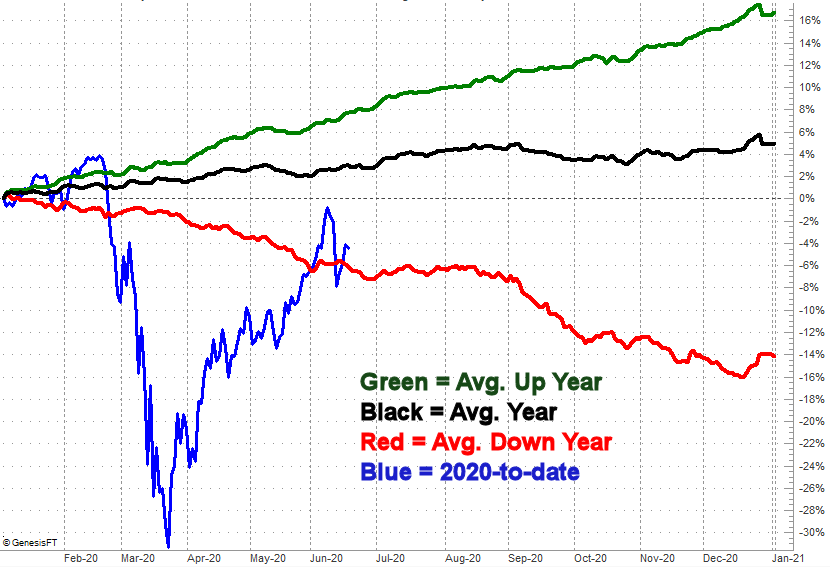 What a wild year so far. Although untypically volatile through the latter part of February, on balance, through the middle of that month things were more or less where they were supposed to be.

Much has happened since then. Stocks have staged an incredible recovery. It's still quite a bit below February's peak, but it's within sight when it wasn't just three months ago. Yet, it's still below where it would normally be at this point in the year. It's barely above where it would be in an off year. The chart below tells the tale.

Implications? Despite all the chatter that stocks are vulnerable to another setback, on a "how far is too far?" basis, it's not. Technically speaking, it was the huge selloff in February and March that was stunningly unusual.

That's not to suggest stocks can't tank. The coronavirus contagion remains a huge unknown, and it looks like nationwide efforts to reopen are resulting in a resurgence of COVID-19 cases. That's going to adversely impact the economy, and by extension, the market. Assume nothing, and prepare for anything. But, to the extent this year can (and will) follow a mostly-normal path, things are more back to normal now than they were just three months ago.

That being said, stocks are also more or less where they should be at this point during a Presidential term.

The chart below compares to average good, bad, and typical market action over the course of a four-year Presidential term. The first two years are usually just so-so, even when things end up going well. The last two tend to be win a President's economic efforts start to really shine. Trump's first three years were well above average, but all of that was wiped away between February 21st and March 23rd. It probably shouldn't have been. It was all reactionary. Now with some time to think about it, traders corrected their mistake. 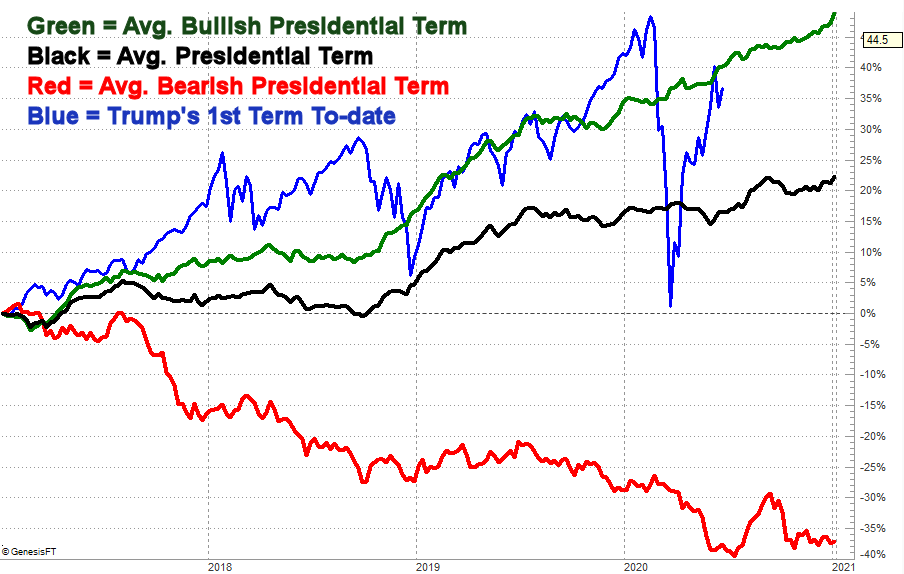 This doesn't leave the market scott-free for the remainder of Trump's term. Stocks are already at the extreme upper range of what can reasonably be expected in terms of performance. And, there's a fair amount of room for stocks to slide lower to revert back to the average four-year gain of 23%. It's up 37% since the beginning of 2017 as of Thursday's close. It's not likely to get much worse than that though. Love him or hate him, President Trump works hard to keep the stock market propped up.