Sector Rotation Analysis: Tech is Roaring, But This Group is Where the Opportunity Lies 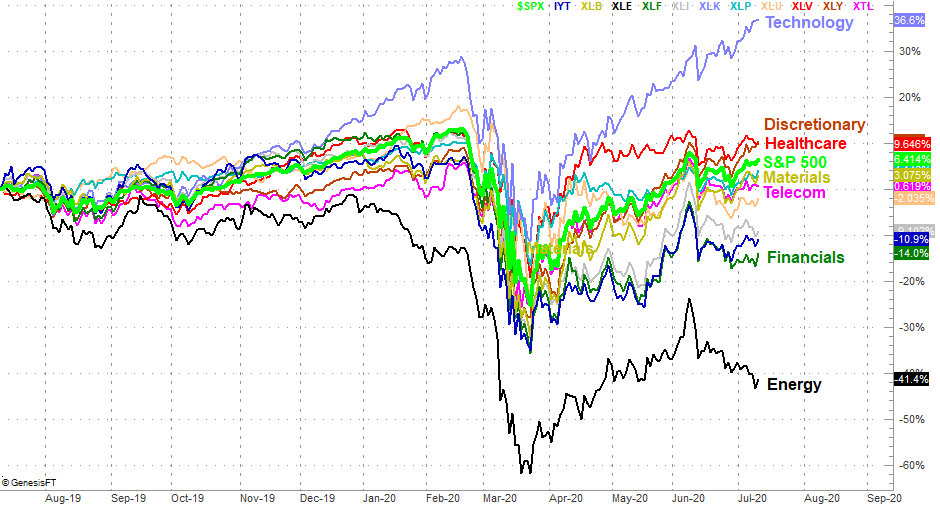 The past four months have been impressive, all things considered. After plunging in February and March on COVID-19 fears, the S&P 500 has bounced back from its March 23rd low with a 42.4% rebound. It's still not back to its record-breaking February high, but that level is at least in sight.

The rebound is far from evenly distributed though. Initially led by energy stocks, renewed weakness for oil (and gas) prices has undermined that recovery effort. The energy sector's stocks are still outpacing the broad market since making the turn, but that lead is dwindling quickly. Energy names have lost about half their value from their early June peak.

The leader? No surprises there... technology stocks. They're up 54% since the late-March low, resuming the lead they enjoyed before the coronavirus took hold. It's curious though. Since that bottom was put in, materials stocks have almost kept pace with technology names. Unfortunately, that strength comes after the materials sector's just so-so performance from the months prior to the big selloff. Discretionary names have almost kept up the same pace since March, somehow.

The chart below tells the tale, illustrating the relative performance of all the major sectors for the past twelve months. Clearly the tech sector broke away late last year, and even with the sharp selloff in March never actually gave up that lead. From this perspective, materials aren't quite as impressive. Not so for the discretionary sector though. They've come out of the lull with more bullishness than they were showing before the February/March swoon. In fact, from the twelve-month vantage point they've eclipsed healthcare despite the fact that all eyes are on healthcare names now as we take aim for a coronavirus treatment.

The chart shows us something else interesting... most names are underperforming the broad market, as measured by the S&P 500. In fact, while discretionary and healthcare names are beating it for the twelve-month period, healthcare stocks aren't outpacing the S&P 500 since the late March low. Once again, that's only technology and consume discretionary names, only the latter of which has habitually done so.

The takeaways? The sheer momentum of tech stocks is enticing, but may be overblown, leaving them rip for profit-taking. Consumer discretionary, on the other hand, appears to be picking up steam. Note that its percentage-performance line just crossed about healthcare's performance track for the past twelve-months. Those "crosses" are important clues, up as well as down.

That said, there's another sector that may merit a spot on your watchlist - transportation names.

They're actually underperformers, since March 23rd as well as for the past twelve months. But, take a look at the shape of the chart. It's starting to test the waters of a cross above the industrials sector's performance, and are doing better-than-average since the June 26th low. It'll be interesting (and time well spent) to see if that subtle hint turns into something trade-worthy.

Everything else seems to be stuck in the pack and just slightly trailing the S&P 500.

This sort of highly-detailed data may seem like overkill, but it's worth the trouble. In any given year, the leading sector and the lagging sector can be separated by as much as 40 percentage points' worth of results. Even stripping out the unusually poor performance of the energy sector this year, the disparity between the financial sector's 14% loss and the technology sector's 37% gain is huge. If you can avoid being on the wrong side of just a couple of sector trends and be on the right side of a couple of others, the opportunity for outperformance is enormous. That's the case even for options traders just looking to cash in on a short-term swing. Leaders lead, and laggards lag.

We'll update this chart as needed. It's just that since late February, we haven't needed too. Headlines were wreaking broad havoc for all sectors. We're finally starting to see some meaningful divergence.