Option School: What the Heck is "Selling Volatility"? 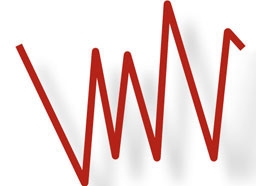 Don't sweat it if you don't know what the term means though. Selling volatility is a real thing, and is actually a pretty simple (even if incompletely described) idea.

But first, a reminder lesson for those who've dared to keep reading.

Option prices are driven by more than one factor. Chief among them, of course, is their intrinsic value. That is to say, a call with a strike price of 50 when the underlying stock is trading at $60 is at least worth $10.

Those who've been trading for even just a little while, however, will know options are always more expensive than just their inherent, intrinsic value. In the above example, depending on how much time was left before the expiration, that call with a 50 strike price when the stock's at $60 could be selling for $13. Where's that extra $3 dollar come from? That's the time value, or speculative value, of the right to buy that $60 stock at $50; nothing's ever free on Wall Street.

What accounts for all the various option prices of a seemingly identical situation? The underlying stock's volatility. The greater the daily ebb and flow of a stock -- the more volatile it is -- the more expensive those options are.

When you're "selling volatility," you're looking for relatively expensive options of highly-volatile stocks, aiming to sell those options at a higher-than-average price in anticipation that they will lose value at a faster rate than lower-cost comparable options might.

It's a way of reversing the old "buy low, sell high" adage with options. You're buying, on a net basis, an option at a high price and looking to sell that option back at a lower price.  It just so happens that there's greater opportunity to sell at a high price when the underlying stock is a highly volatile one.

There are a couple of ways to do this. One of them is the outright sale, or short, of a call or a put. These are very dangerous trades for most, and odds are good your broker wouldn't even let you enter them unless you had the cash or stock in the account to close the trade out should the worst-case scenario develop.

A more common -- and more sensible -- way of selling volatility is simply the use of credit spreads. These are just the simultaneous selling of a call at one strike, the purchase of a call on the same stock (or index) with a different strike price, that puts money in your pocket when the trade as taken on. It works for puts the same way. That "credit" means you're a net seller of volatility; you're ultimate goal is to watch those options lose value and expire worthless, so you can keep the credit you took in when you first entered the trade. (Until they expire, you're still on the hook, so to speak.)

A comparative example will help make sense of the idea.

Let's say we have good reason to think Deere & Co. (DE) shares are likely to move higher from their current price of $123.66, but should do no worse than move sideways for the foreseeable future. We could buy calls, but if DE did just flatten, the calls would lose their time value, and not only would we not gain, we'd lose ground.

The 122 put we're buying isn't entirely necessary. It just our "insurance policy." Should Deer shares tank and fall to less than $122, our short position in the 123 puts could cost a fortune to reverse. By owning the 122 puts, if things went bad, we'd still own the 122 put, and could sell it or exercise it as needed to offset the downside of having the 123 put exercised against us. The real moneymaker of the trade, however, is the 123 put we're selling. Our goal is for both options to expire unused a month from now, which is what would happen as long as DE remained above$ 123. Take a look.

It's not just the option pricing we're worried about right now though. Of more interest in this "selling volatility" lesson is the theta data, in the last column.

Don't believe it different stocks set the stage for different potential gains? Take a look at the same data table for biotech company Tesaro (TSRO), which closed at $123.71 on the same day DE closed at a basically-the-same $123.66. The difference in the numbers is 100% driven by the fact that TSRO is a much more volatilite stock than DE.

We could enter the same basic credit spread trade using the same strikes on the same puts, and put $9.00 per contract ($5.84 - $8.75 = $0.09, or $9.00 per contract) in our pocket. That's less than the $11 we'd be collecting with a credit spread on Deere, but take a look at the theta values here. These two puts both lose about a dime of value per day. We'd make our money a lot faster on the Tesaro trade, even though it's identical to the Deere trade in almost every other way.

Don't get bogged down by figuring out which of the two trades makes the most sense. It's not always as  simple as spotting the highest theta ($11 vs. $9, for example), and sometimes you may well see a different mathematical scenario than this one. There's also the not-so-small matter that as a stock's volatility changes, so too does its option pricing impact. Both examples above are examples of selling volatility. It's just that in one of them, we're selling a lot more volatility than in the other... though it doesn't necessarily mean that trade bears more fruit.

The point here is, these are the kinds of things sellers of volatility have to consider, as they point to the true risk and reward scenario... a scenario that can be a lot different than the straight-up purchases of calls or puts. When you're a net seller of volatility, unlike owning options, time works in your favor rather than against you, and there's more than one way to win.

And if you've ever entered a credit spread trade, well, you've already sold volatility, perhaps without even realizing it.