Opinion: The stock market's comeuppance is coming, as bullishness gets extreme 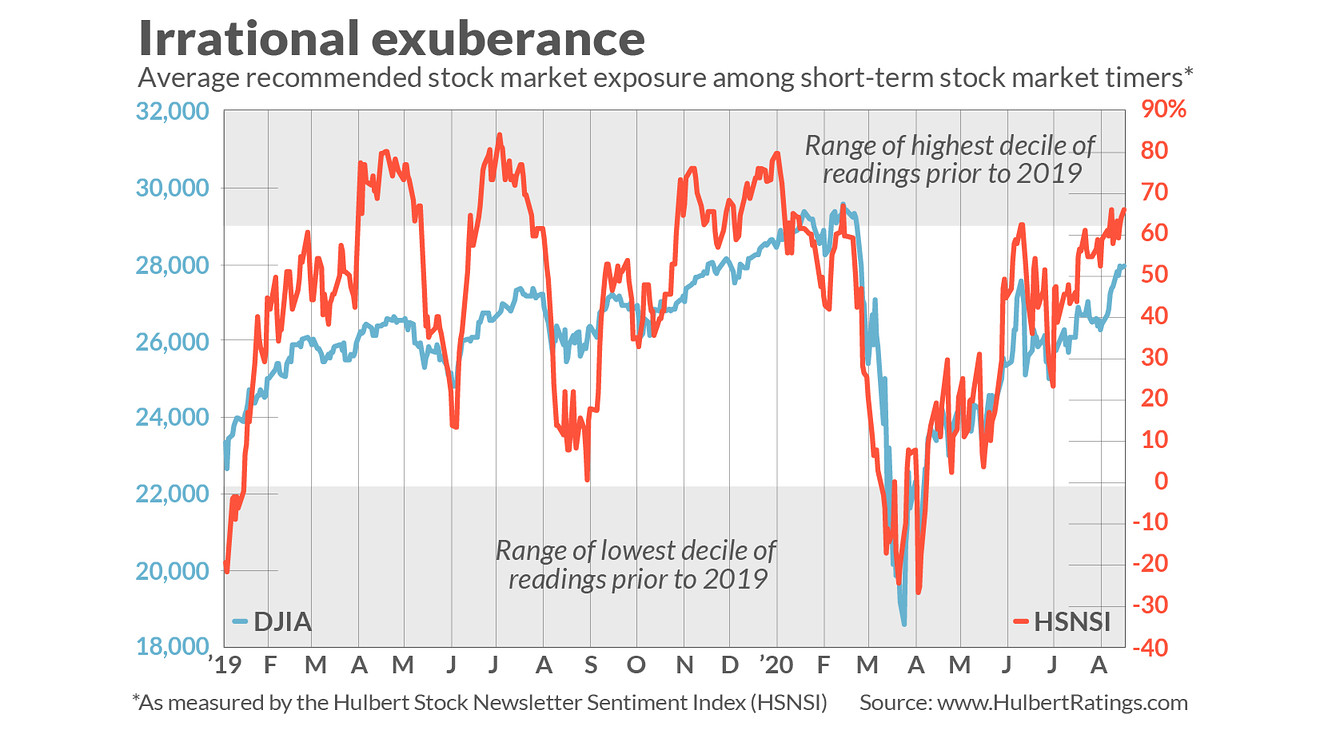 The U.S. stock market's five-month rally is coming to an end. Of course I don't know when. That's important to acknowledge, since this spring I presented arguments for why the market's March lows could be retested in mid-June or mid-August. As many of you have emailed me recently to remind me, neither scenario came to pass.

Nevertheless, conditions are even stronger now for a correction. One big reason is that short-term market timers have become extremely bullish, which is not a good sign from a contrarian perspective. This is illustrated in the chart below, which plots the average recommended equity exposure among nearly 100 such timers that my firm monitors on a daily basis (which is the Hulbert Stock Newsletter Sentiment Index, or HSNSI). This average currently stands at 65.9% - higher than 95% of all daily readings since 2000, when my firm began calculating this index.

The chart also highlights those occasions over the last couple of years in which the HSNSI has risen to be within the top 10% of all past readings-thereby meeting the criterion for excessive bullishness as set by some contrarians. You'll notice that the market has proceeded to struggle on those prior occasions when this criterion was met.

To be sure, the chart only encompasses the last two years. But what is illustrated in the chart is confirmed by the full database back to 2000 - as is clear in the table below.

The lesson I draw from the data is that we should keep our enthusiasm in check. The stock market was surprisingly strong over the last five months, but - as the famed British economist John Maynard Keynes liked to remind investors - trees don't grow to the sky.

Another reason to expect at least some sort of pullback is that there is almost always a market decline over the three months prior to presidential elections. That's what I found upon examining the behavior of the Dow Jones Industrial Average between mid-August and Election Day in every election year since 1900. On average, the Dow at some point in that three-month period of those years was more than 5% lower than where it stood in mid-August.

If the stock market experiences a similar pullback, that means that the Dow between now and early November will be 1,400 points lower than where it stands today. That's just the average. The worst correction in this mid-August-to-Election-Day period came in 2008, when the Dow dropped 30% from mid-August to its low prior to Election Day.

It's worth dwelling on that terrible experience. You may dismiss it as irrelevant to today's market, but at the comparable point to today 12 years ago - in August 2008 - market timers were also quite upbeat. They had no idea that, in the subsequent 60 days, Lehman Brothers would collapse and almost bring down the entire global financial system.

I keep a file of all the bullish forecasts that market timers were making in August 2008. That way I can readily retrieve them when clients become too confident about what the future has in store. The following proclamations were made in late August 2008 - two weeks before Lehman Brothers' bankruptcy:

The bottom line? Don't be surprised if the stock market suffers a nasty decline in coming weeks.

Mark Hulbert is a regular contributor to MarketWatch. His Hulbert Ratings tracks investment newsletters that pay a flat fee to be audited. He can be reached at [email protected]