Netflix Stock Could Be on the Verge of a Big Rally 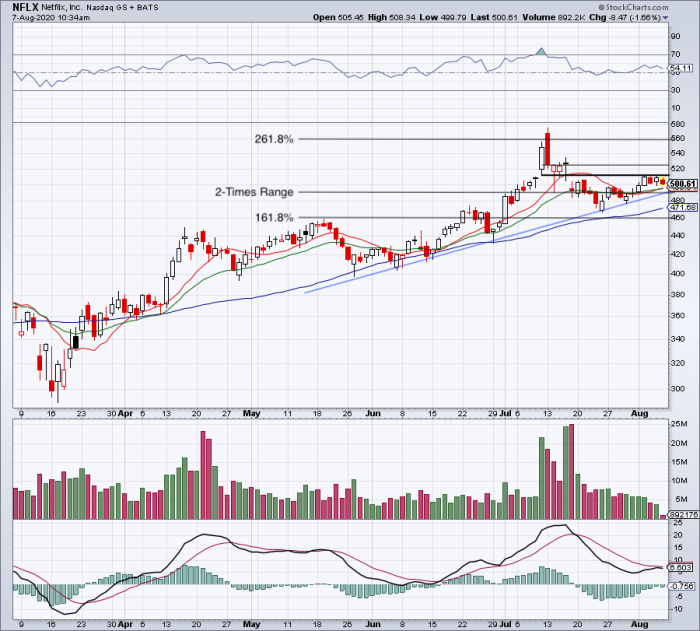 - Netflix stock has fallen off investors' radars since reporting earnings almost a month ago. Let's circle back on this name as a breakout looks imminent. -

The company reported a pretty solid result on July 16th, but the initial reaction was a move lower, with shares shedding about 6.5% in its first post-earnings trading session.

Since then, shares have chopped around in a sideways consolidation, with investors waiting for either a break higher or a break lower.

Investors' attention has waned from Netflix. Last week, we heard from most of FAANG, with Facebook (FB), Apple  (AAPL), Amazon (AMZN) and Alphabet  (GOOGL) (GOOG) reporting in a single day. This week has been littered with high-growth tech stocks reporting earnings.

But should they be focusing on Netflix? The charts look like they're about to put together a potentially decent rally. We just need to see some rotation.

Now both of these measures are acting as support. However, the stock has found resistance near $510 all week. For three straight days, Netflix logged its session high in the $410s.

I want to see a rotation over this mark. If it doesn't happen on Friday, it puts a week-up rotation in play for next week.

That may be the only spark that Netflix needs, as a rotation over this level could put the $525 area in play. There we can re-evaluate the setup, but if it pushes through, it could put the $550s on the table.

On the downside, keep an eye on the $495 to $500 area. In that area Netflix should find a bevy of support, including the 10-day and 20-day moving averages, the two-times range extension and uptrend support (blue line).

Below puts a larger pullback in play. The immediate downside targets become the 50-day moving average, the post-earnings low at $467.54 and the 161.8% extension near $460.