Monday's Meltdown Was Rough, But Not a Death Blow 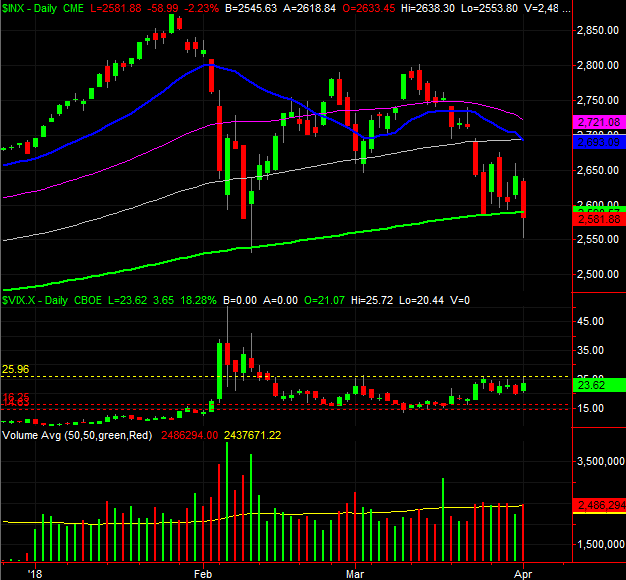 If it seems like the market is trying to frustrate you by making it impossible to handicap, that's because it is.

That certainly didn't change with Monday's action, when a little bit of trade war news was enough to pull the rug out from underneath the market and let it slide below the key 200-day moving average line. It's the first time the S&P 500 has been below the long-term moving an average in months.

Yet, there was just enough of a glimmer of hope by the end of the day to prevent would-be bears from piling on.

Take a look. The index bounced back just a little bit late in the session. It's also curious that despite the market's extreme weakness, the VIX didn't hurdle its recent ceiling at 26.0. The S&P 500's volatility index will need to move above that level first if marketwide weakness is to turn into a full-blown correction.

That's not to say it won't happen in the future. It might happen. Or it might not. That's the problem... we're still very much on the fence.

Whatever the case is, clearly the market is on the defensive here, being pounded around by the sellers with the bulls unable to do much about it.

There's another red flag quietly waving in the background. That's the market's volume. As you'll also see on the chart above, the red volume bears have been a little bit - if not a lot - taller than the green, bullish volume bars of late. That's still the case as of Monday's session.

Yes, this is confusing. It's not an accident though. The market is meant to confuse you, convincing you a breakdown is looming when a rebound is actually around the corner. Likewise, the market (or at least its participants) likes to tease you with bullishness right before it implodes. Right now, it's not dropping any hints - false or otherwise - largely because it's trying to get more people confused. Give it time. Don't take the bait the chart is waving in front of you. Wait for more clarity.

The big signal? That's actually going to be the VIX. Look for a trend above 26.0, though bear in mind a big surge from the VIX - maybe above 40 - will also signal a hard bottom for the market rather than the beginning of a prolonged pullback. The S&P 500 will likely be in a freefall that day, which will look and feel scary at the time, but will end up being a capitulation.

If the market is going to make a meaningful selloff here (as in on the order of 10%), it's going to need be a well-paced move... something the market hasn't been good at in a long, long while. Traders are trading on their emotions, ignoring fundamentals that don't align with their pre-conceived notions, and over-reacting to every headline.