Weekly Market Outlook - On the Cusp of Another Bullish Wave 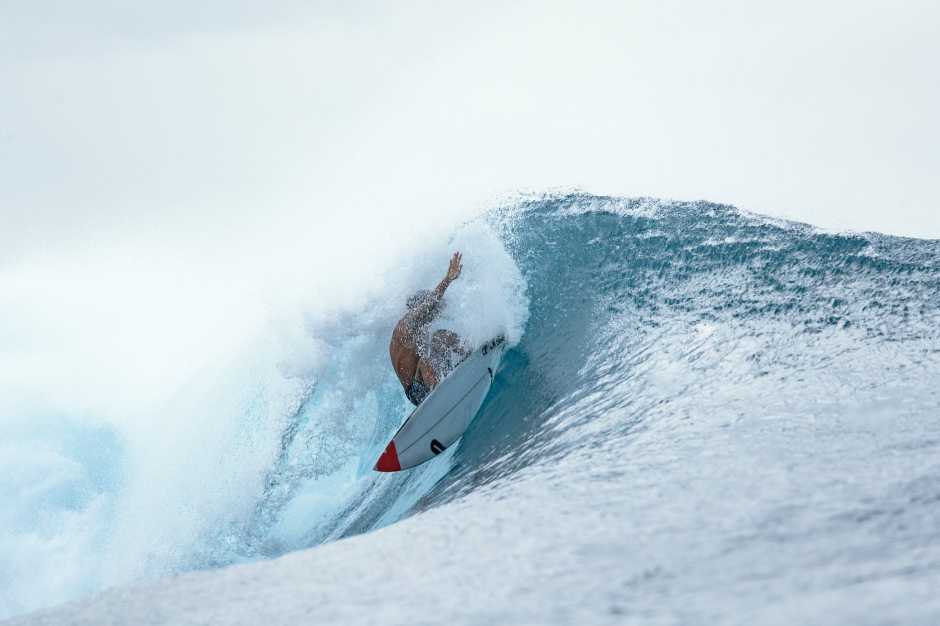 Stocks managed to shrug off the weakness from two and three weeks ago last week, with the S&P 500 logging a 2.6% rally for the recently-ended five-day stretch. It's far from the ideal bounce out of a lull though. The volume behind the move was never great, and actually waned on the way up. Meanwhile, the NASDAQ Composite remains below a couple of key moving average lines, having bumped into them as resistance earlier in the week. The market's still got a lot to prove before we can safely say higher highs are in our immediate future.

We'll look at these things in some detail below. First, let's recap last week's modest amount of economic data, and take a look at (potentially) market-moving reports scheduled for this week. A couple of major releases are in the lineup.

The only numbers of any real interest last week as the inflation data, from the Bureau of Labor Statistics. But, given the worries of sharply rising interest rates in an effort to beat inflation before it materializes, this is pretty important information.

Beginning with the bottom line first, it's too soon to jump to conclusions, but inflation seems pretty tame. It was more or less what was expected for February, and on an annualized basis stands at 1.3%...well within the Fed's target. Producer inflation jumped to an annualized rate of 2.8%, building on January's surge to 1.7%. Don't overreact to that surge, however. Remember, we're now at the one-year anniversary for the pandemic, and pricing of inputs and outputs was squirrely at the time. Broadly speaking, nobody's dealing with prices for anything they can't handle (even if gas prices are getting a little annoying). 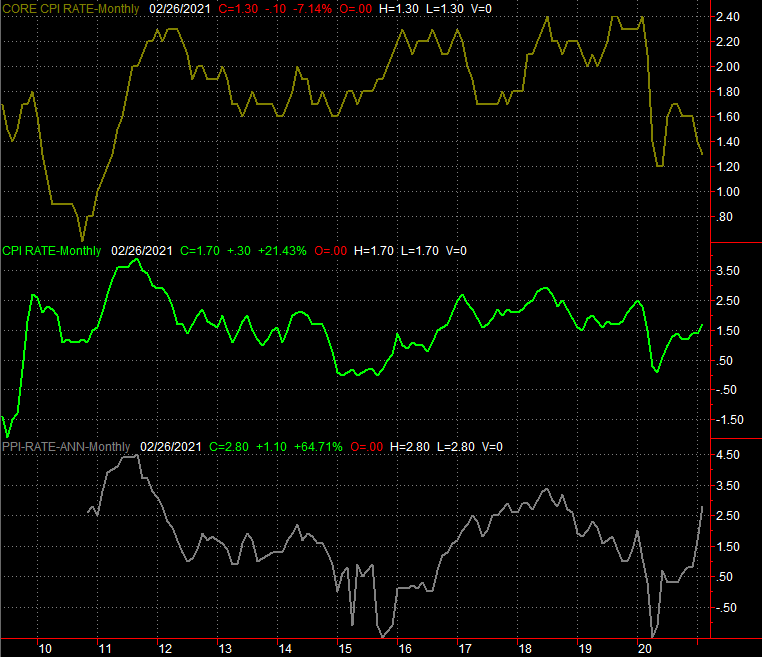 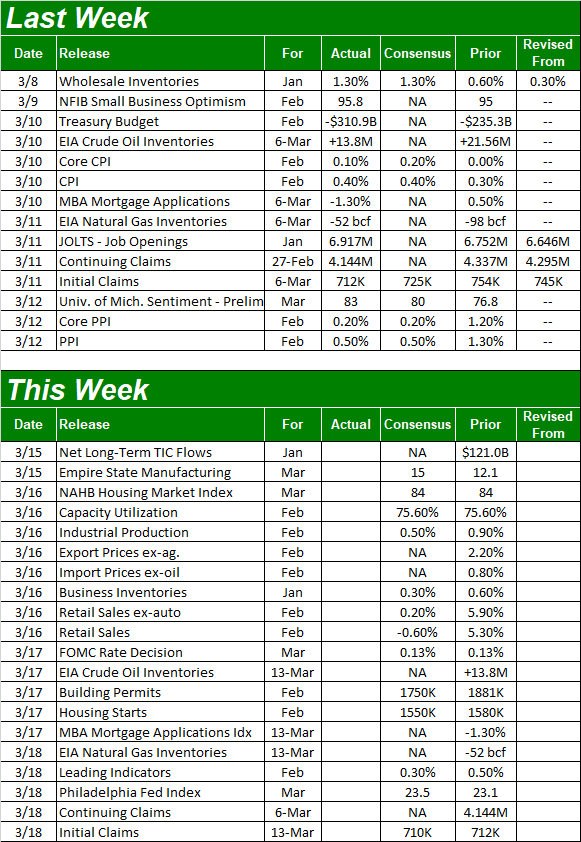 This week's big news starts on Tuesday, with a look at last month's industrial production and capacity utilization. You'll recall that these two data sets correspond well with corporate earnings, which in turn corresponds with the market's long-term direction. Both are still well below their pre-COVID levels, but importantly, both are now consistently moving higher. Both are also expected to have moved forward again for last month. 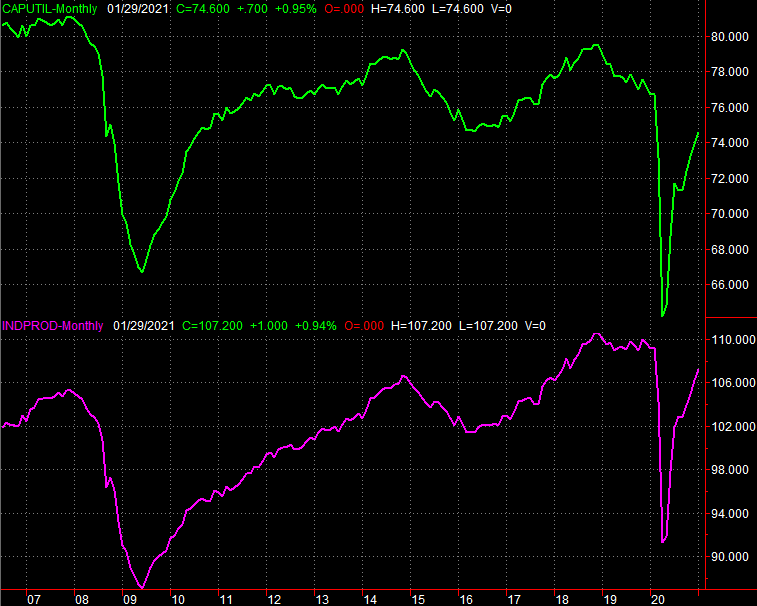 Also on Tuesday we'll hear about last month's retail spending. They jumped a month ago, and are expected to slow dramatically this time around. Just bear in mind there were some changes to the way the number is calculated as of the end of last year, skewing January's figures upward by a lot. It'll be an interesting report, but not one we can give too much credence too... especially given how we're now at the one-year anniversary of the pandemic that dried up spending in some areas but prodded it in others. 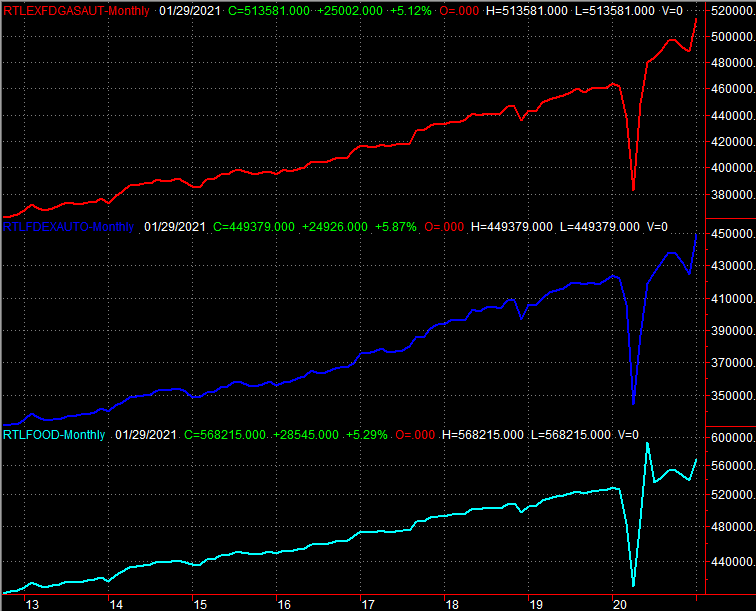 There's no chart of it, but on Wednesday the FOMC will make a decision about interest rates. Economists don't think it'll waver from the Fed's current fed funds target rate of 0.135% (or a range of 0.0% - 0.25%), but chatter about higher rates meant to curb brewing inflation is circulating. The rhetoric will be the more important aspect of the report.

Finally, also on Wednesday look for February's housing starts and building permits. Real estate has been one of the clear bright spots for the economy of late, with starts and permits both reaching multi-year highs just within the past few months. These readings are expected to cool just a bit this time around, but not nearly enough to say they're still anything but red hot.

We'll kick things off this week with a look at a weekly chart of the S&P 500. It's in this timeframe we can not only see the reversal bar from two weeks ago followed through last week, driving a decent gain. It's also in this timeframe we can put last week's 2.6% advance in perspective relative to the rally since the low from March of last year. We're not back into record-high territory, but we're close, having pushed back above the 20-day (blue) and 50-day (purple) moving average lines in the process. The index is also back above the rising support line (orange) that had been guiding stocks higher for a year now. 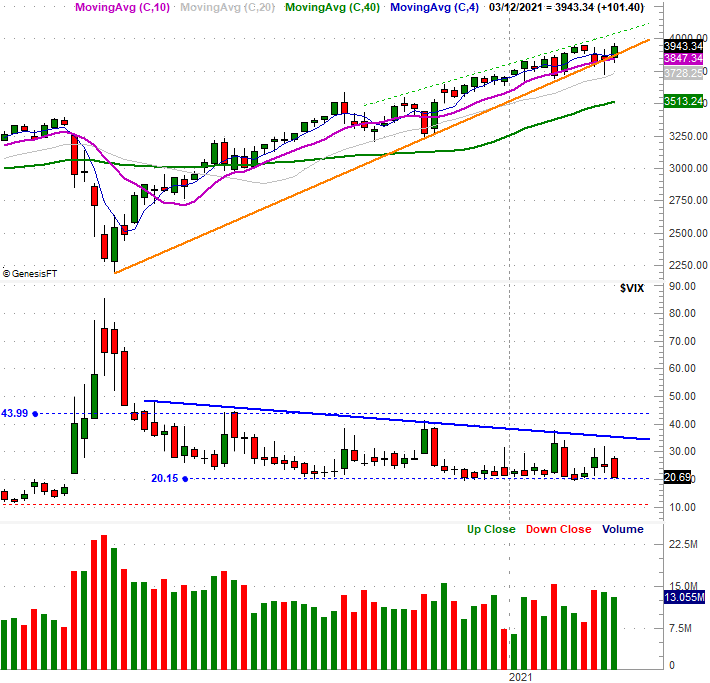 There are a couple of issues apparent on the weekly chart of the S&P 500, however. One is, the volume behind the move was modest. The other is, the VIX has fallen back to a more absolute floor near 21.0. Here's the daily chart, fleshing out some more details. The index tested its recent peak near 3953 on Thursday, but didn't hurdle it. The pause is curious. It's also on the daily chart we can see that not only was the volume behind the advance a bit weak, it grew weaker on the way up. 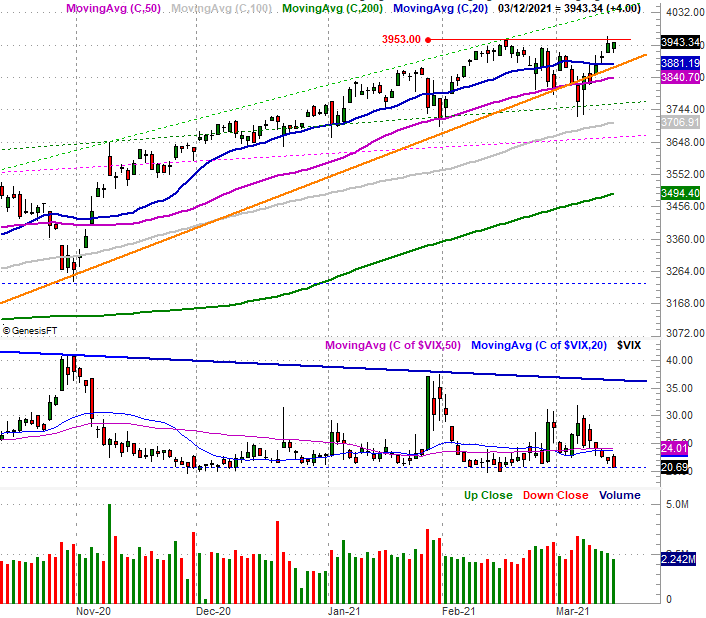 Don't read too much into this nuance. When splitting up the NYSE's daily up and down volume ($UVOL and $DVOL on our chart below), it's not like bearish volume is soaring. It's also not as if bullish volume is completely tanking. It is clear, however, that interest in buying stocks certainly isn't improving on the way up.

S&P 500 Daily Chart, with NYSE Up, Down Volume, Advancers and Decliners 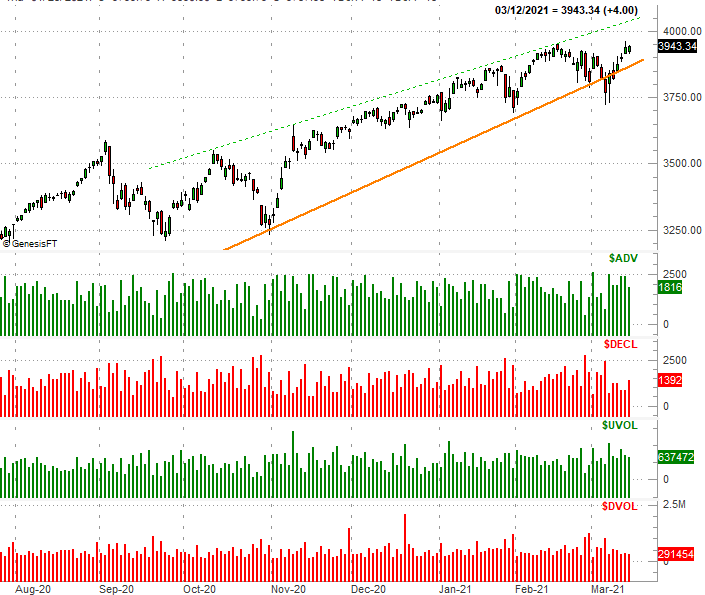 This is in partial contrast to the NASDAQ's same breadth and depth data. For NASDAQ-listed stocks, bullish volume ($UVOLQ) has clearly been trending lower for a couple of weeks now despite last week's rebound. And, the NASDAQ's bearish volume ($DVOLQ) -- while not exactly rising the past few days -- clearly surged on Friday even though it was a nominal day for the market.

NASDAQ Daily Chart, with NASDAQ Up and Down Volume, Advancers and Decliners 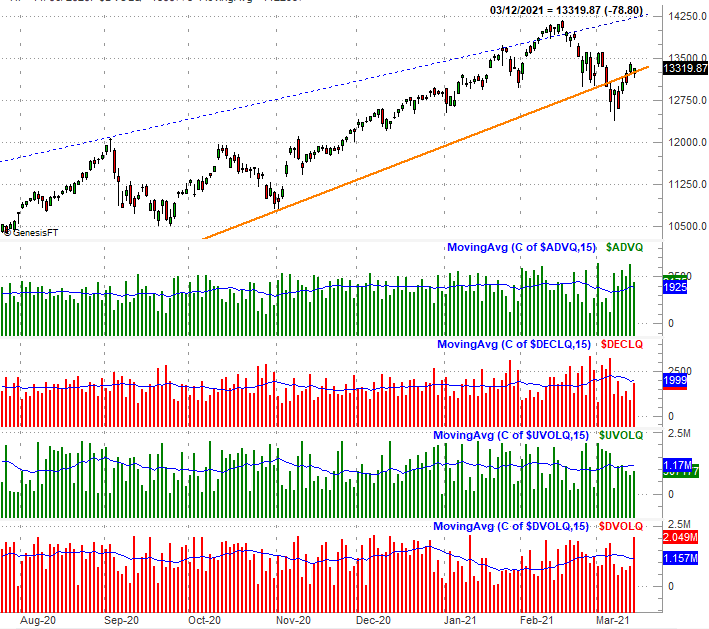 Here's the NASDAQ's daily chart with several other indicators. Of particular importance is the 20-day (blue) and 50-day (purple) moving average lines, which the composite failed to move back above with Thursday's rally (although the bounce up and off the gray 100-day moving average line was pretty impressive). 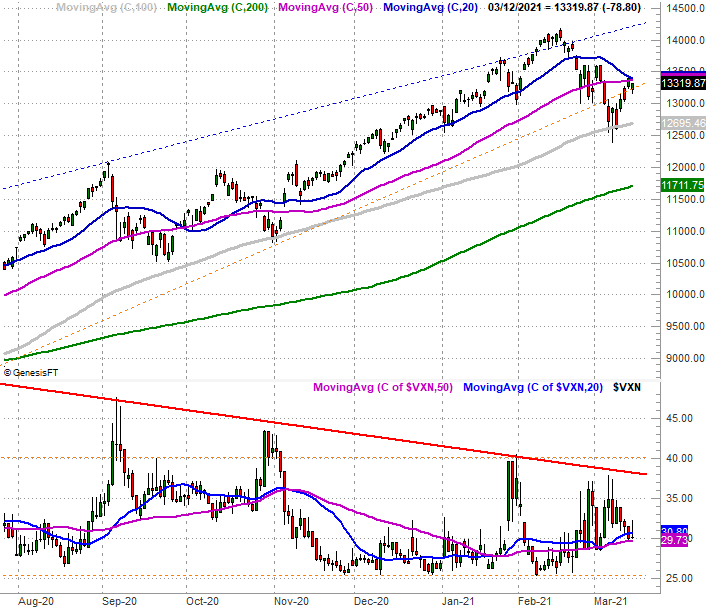 Simply put, the bigger-picture rally is alive, but not well. Both indices above face immediate hurdles, and are starting to test them without a particularly great footing. That doesn't necessarily portend a pullback; there's still a great deal of technical support below. However, the scales are still tipped bullishly. They'd be considerably more bullish if the NASDAQ Composite could get past its moving average lines converged at 13,380.