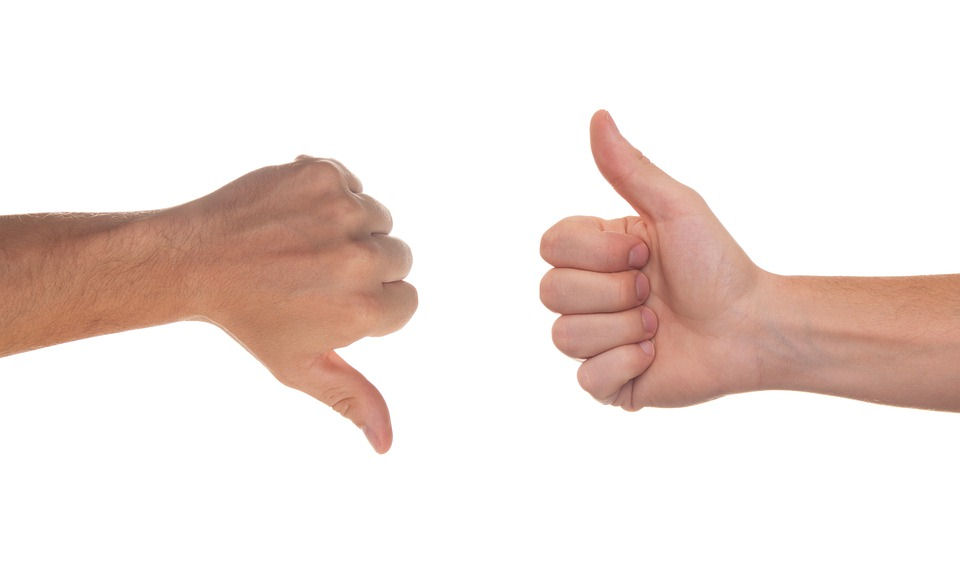 Of course, the index has snapped back from worse selloffs several times since the rally got going nearly a year ago now, and did so quite quickly. Most of the major indices found technical support exactly where you'd expect them to (and want them to) as well. We're hardly in a "danger zone" just yet, and while the volatility indices moved decidedly higher, that didn't snap their bigger-picture downtrends. That has to happen as well if this is actually an omen of a major market correction.

We'll take a detailed, visual look at all of it below, right after a rundown of last week's big economic announcements and a preview of what's coming this week.

Last week's batch of economic reports was heavily focused on the housing market, so we'll start there. In short, this sliver of the economy remains a bright spot. Home prices continue to rise into record territory, and home sales are brisk (even if unevenly so).

As for home values, the S&P Case-Shiller Home Price Index was an incredible 10.1% higher than year-ago levels. While that was for December -- not January's or February's -- sales, the trend is clear. That same trend jibes with the FHFA's measure of housing price, which grew to the tune of 1.1% between November and December. 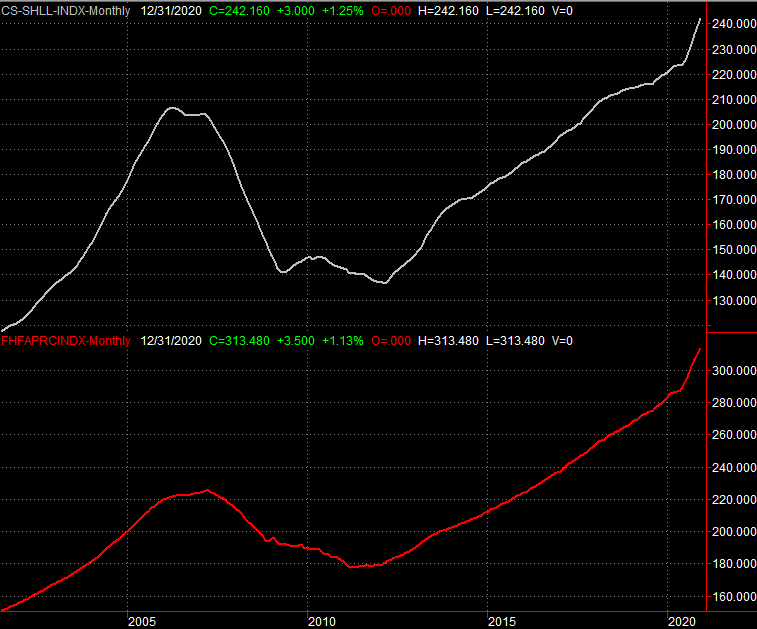 The demand based on home values likely persisted at least through January, if home sales are any indication. Sales of new homes bounced back to an annual pace of 923,000 for January, from December's print of 829,000. That's still shy of September's peak of just over 1 million, but the overall trend is clear. Though we have less historical data to judge, this accelerated rebound in house purchases from the initial COVID slump is being mirrored by sales of existing homes as well.

Curiously, consumers as a   aren't feeling more confident in the condition of the economy despite the swollen number of them buying homes; it's a clue they're only taking advantage of low interest rates. The Michigan Sentiment Index is felling again, while the Conference Board's measure is just coming off levels near last March's post-pandemic-arrival low.

Adding to the confusion surrounding this persistently low sentiment is the fact that money is increasingly less of a problem. Although we have no chart of the data, personal spending improved 2.4% in January after slumping 0.4% in December. Income, meanwhile, soared 10% following December's 0.6% growth. We're not seeing this income and outlay improvement being matched with job growth, but clearly employment progress is being made somehow. 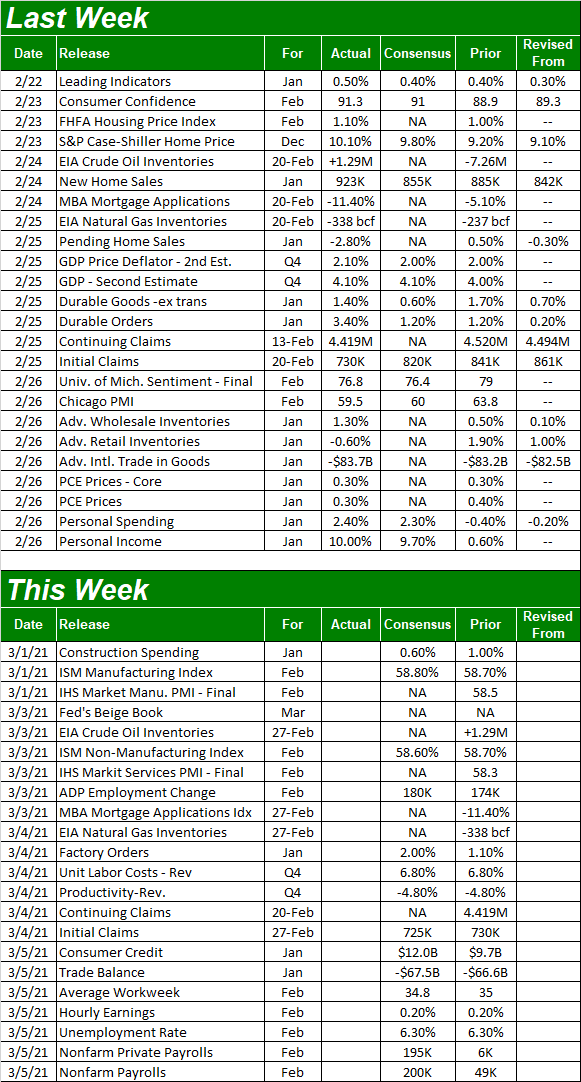 This week's biggies are updates from the ISM and of course Friday's jobs report for February.

As for the Institute of Supply Management's economic measures, the organization believes both the manufacturing as well as the services indexes will essentially match January's reading, both of which remain above the critical 50 level that divides growth and contraction. 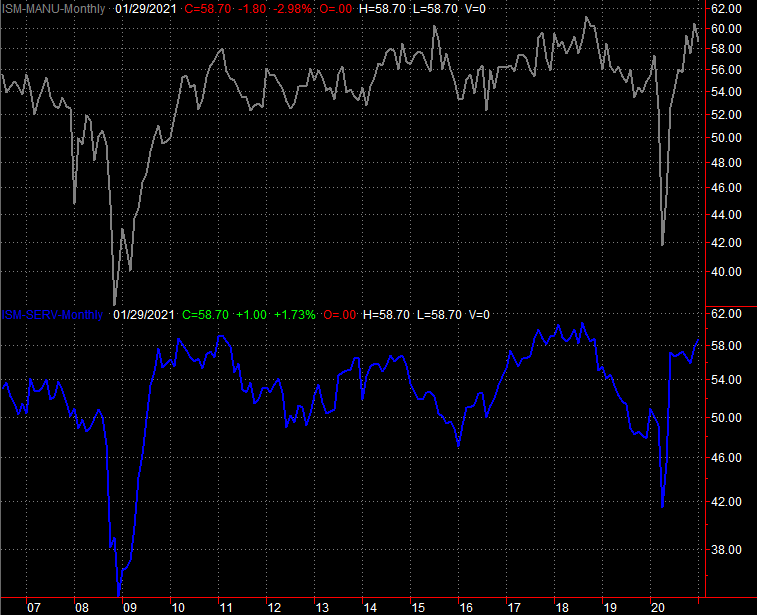 On the jobs front, forecasters are modeling no change in the current unemployment rate of 6.3%, though they are looking for the addition of 195,000 new payrolls. That's a major improvement on January's growth of merely 6000 jobs, but still not great progress given the need and given the apparent pace of the overall economic rebound. 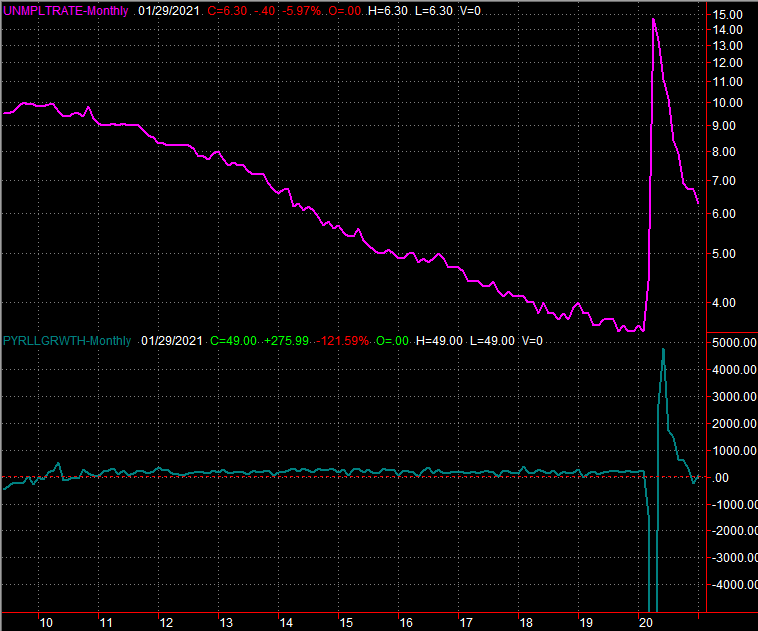 We'll start this week's analysis with a look at the weekly chart of the S&P 500 for a couple of different reasons. One, we want to put last week's (coupled with the previous week's) selloff in perspective relative to the rally since last March's low. Two, we want to illustrate that these big selloffs haven't really gone anywhere since last March even if they were harrowing at the time. In fact, last week's low just revisits a rising technical support line marked by March's low, October's low, and January's low (blue, dashed). It was also more or less halted by the support at the 50-day moving average line (purple) as well. There's a good chance this is all the pullback that's in the cards for now. [Also notice the VIX remains contained by a couple of different technical resistance levels.] 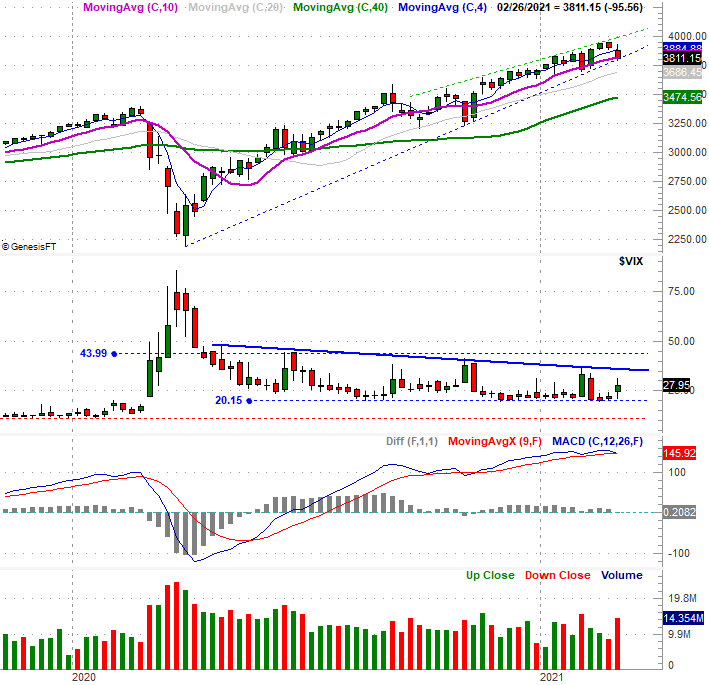 There's a flipside to this assessment, of course. That is, while the market hasn't suffered any technical damage it can't recover from yet, that eventuality is increasingly possible with each step forward stocks take; the S&P 500's 80$ advance from March's low to February's peak is unusual regardless of the circumstances that sparked it.

To really appreciate just how unusual this move has been -- and just how overbought stocks are at this time -- the weekly chart of the NASDAQ Composite puts things in more/better perspective. The rebound that's taken shape over the course of the past twelve months isn't just a mere unwinding of the pandemic-prompted selloff last February and March. It's carried the composite well above its bigger-picture trend. The NASDAQ Composite is now 13% above its 200-day moving average line (green), and just two weeks ago it was as much as 23% above it. Both are extremes that are rarely sustained. 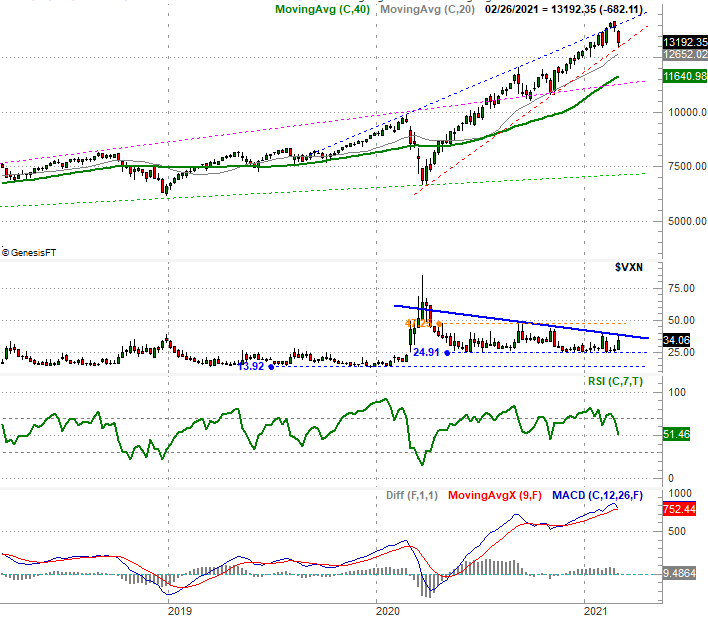 Of course, even with the risky situation, the NASDAQ's uptrend remains technically intact. There's a floor extending back to March's low, and the composite's volatility index remains below technical resistance.

Things are changing though.

We mentioned hints of this a week ago, but the hints turned into downright facts last week. The number of daily advancers and the amount of daily bullish volume has been shrinking since early February, while the daily decliners and bearish volume has been rising at the same time - especially for the past couple of weeks. It's true for the NASDAQ's listings...

NASDAQ Daily Chart, with Advancers, Decliners, Up and Down Volume 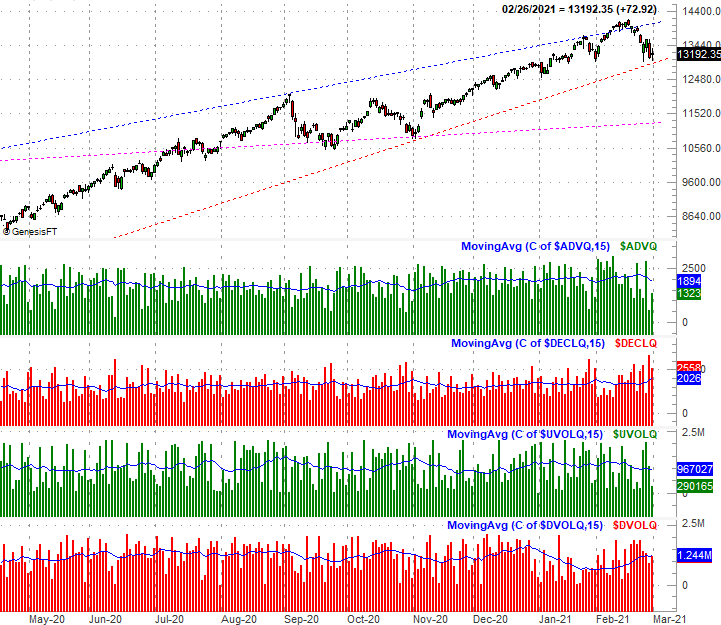 S&P 500 Daily Chart, with NYSE Advancers, Decliners, Up and Down Volume 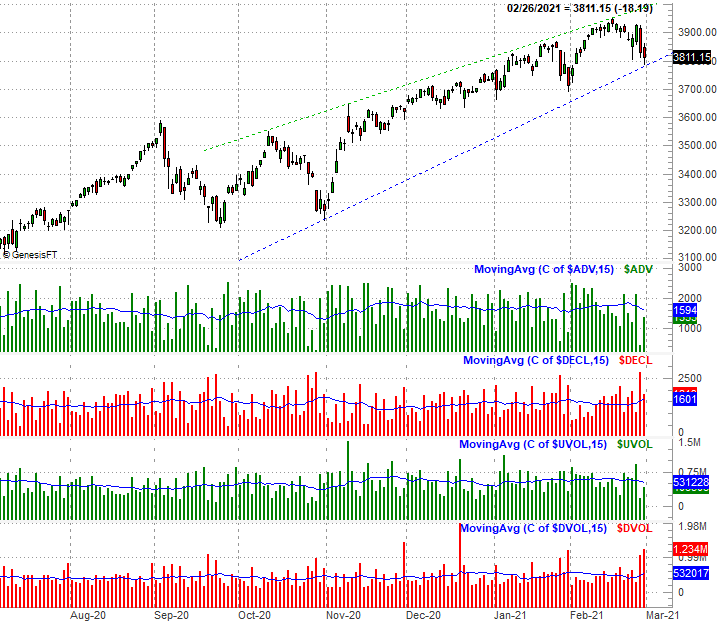 We've seen the market's breadth and depth lean bearishly before and it not turn into a full-blown correction. But, this instance is a little more pronounced than usual, and the market itself is much more overbought than usual. Now all of a sudden all those lines plotted all over the charts of the S&P 500 and the NASDAQ Composite start to mean a lot; we'll limit our focus to them on the daily chart of the S&P 500.

Take a look. The 50-day moving average line (purple) and the rising support line connecting March's low, last week's low, and October's low (pink) are about the converge. Both are also serving as technical floors, but more important, both are being tested right now. Also notice that while the VIX's technical ceiling (blue) has yet to be breached, it's close to being tested again. Sooner or later, it's going to break, allowing the VIX to start making higher highs. That's likely to coincide with a key technical breakdown for the S&P 500, and there plenty of nearby floors - from 3666 to 38 to break. Once the first ones start to buckle, it becomes easier for the other ones to do the same. 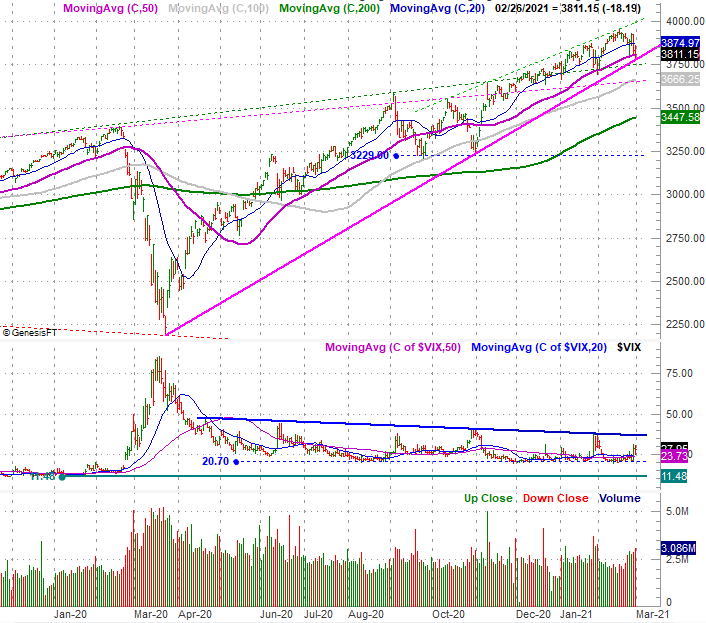 Of course, none of this has happened yet, and only remains a possibility. The bigger-picture uptrend is still alive, even if it's not well and near the brink of collapse. Just watch all the aforementioned lines closely, every day. They're going to break sometime.