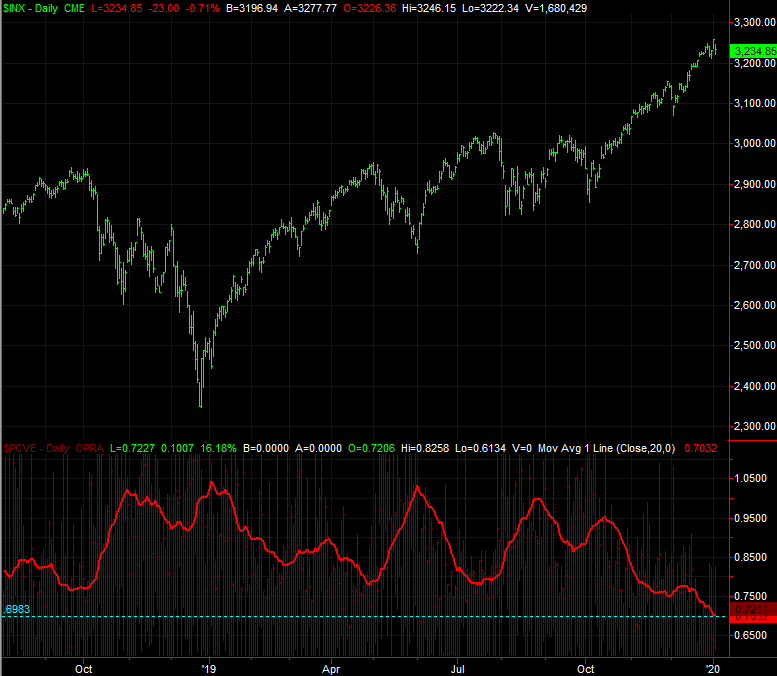 It was a valiant effort, but the market -- or the S&P 500 anyway -- could muster a sixth straight week of gains. The NASDAQ Composite did, but even so, it was an ugly effort. The weight of the gains since early October are simply too great to shrug off.

That being said, it's not like stocks have slipped back into a convincing downtrend, or even an unconvincing one for that matter. Although a couple of the telltale signs of a peak and the formation of a pivot point materialized last week, support remains where it's most important that support remains. The VIX and VXN aren't exactly helping the would-be sellers out either. There's still a chance the bulls could set a tone early in the new year. It's the "first five trading days" that matter the most.

We'll weigh it all below. First though, let's recap last week's biggest economic announcements and preview what's on store for this week. It ends with a big announcement from the Department of Labor.

A pretty busy week last week, especially considering the New Years break right in the middle of it. It was an especially big week for real estate data, as we wrapped up the last of December's look with October's pricing information. The FHFA Housing Price Index was up, though the 0.2% increase wasn't quite as robust as expected, and indicated a slowing pace. The S&P Case-Shiller Index, however, accelerated to 2.2% annualized growth. Both measures are still lukewarm, but serviceable all the same. 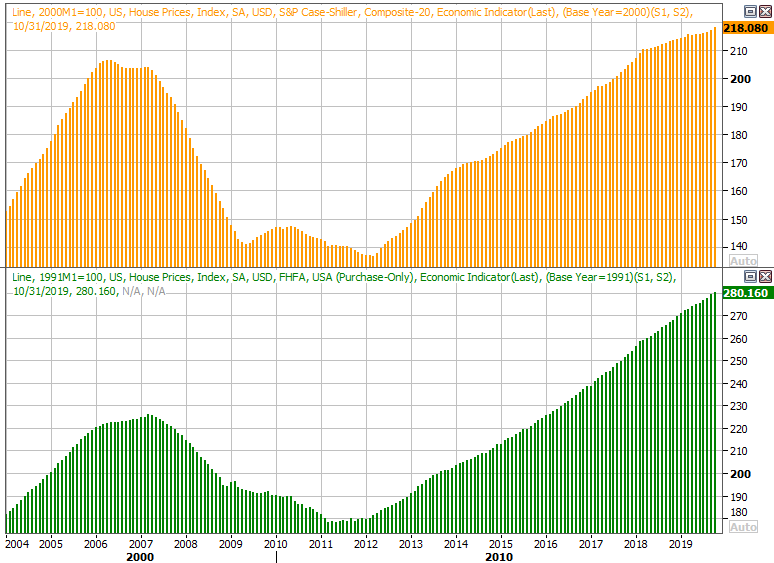 The other big piece of economic news last week was December's automobile sales. They've been slowly dwindling since 2015's 'peak auto,' but perked up last month to an annualized pace of 17.55 million. It's not a full-blown turnaround, but it's a step in the right direction. At the very least it points to a certain level of consumer empowerment. 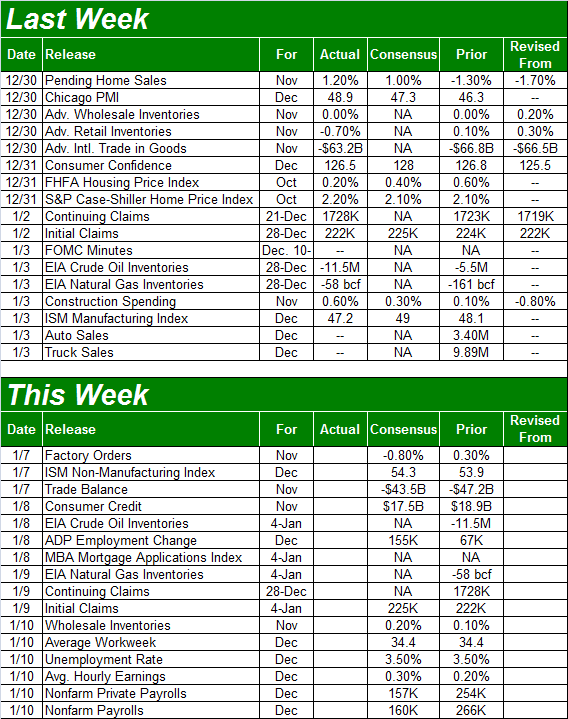 This week's going to be another busy one, finishing with Friday's jobs report. There's an important report coming on Tuesday as well though... December's ISM Services Index, to round out the ISM Manufacturing Index report we got last week. The manufacturing figure fell -- again -- and now at 47.2 is uncomfortably below the critical 50 level. The services version is still above 50, and expected to move higher for last month. Even so, its broad trend is still angled downward. 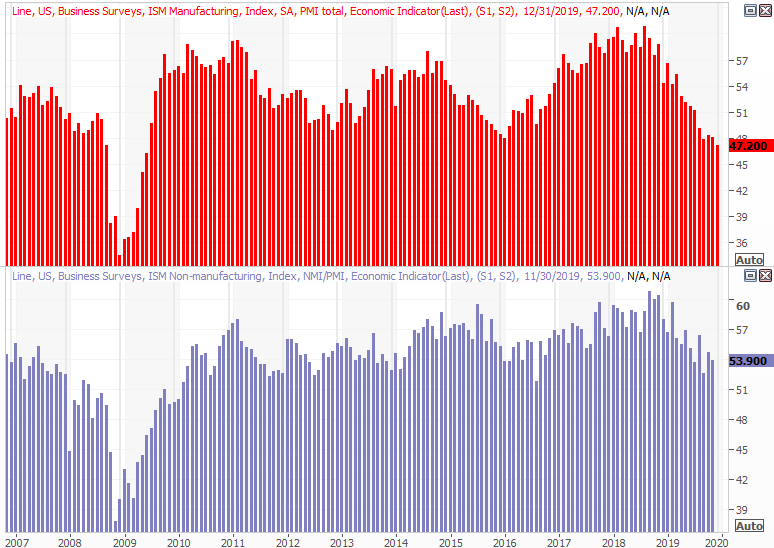 Finally, buckle up for Friday's jobs report. The pros are calling for a slowdown in the number of jobs created, following a huge 266,000 figure for November. But, even if it comes in anywhere close to the expected 160,000, that's a big win. That won't be enough to move the needle on the current unemployment rate of 3.5%, but that's a structural limit already. 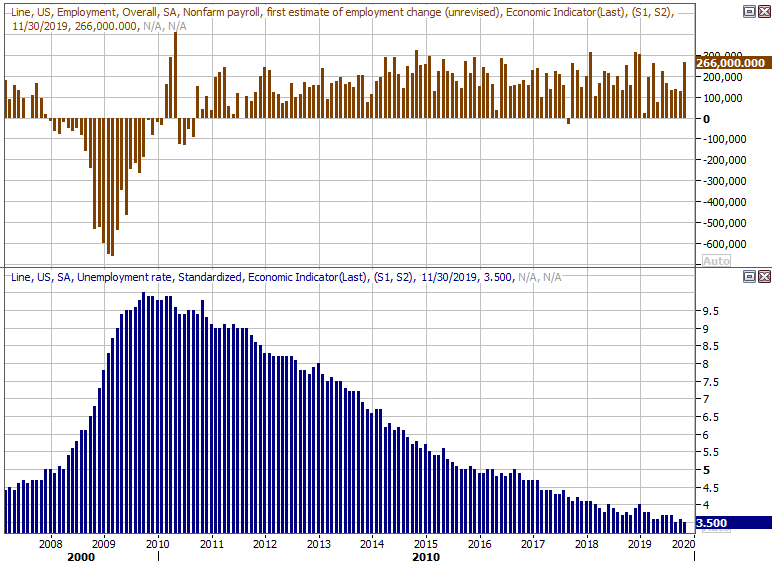 As always, we'll take a more detailed look at the jobs report at the website.

It could have been worse on Friday, and for a short while, it was. Though the S&P 500 still ended the session down to the tune of 0.71% on the last trading day of last week's holiday-shortened trading action, the close of 3234.85 was still notably above the low of 3222.31. The stumble also failed to threaten any key support levels, including the 20-day moving average line (blue) at 3194. The market's overbought to be sure, but this is hardly evidence that the would-be sellers are ready to do any real damage. 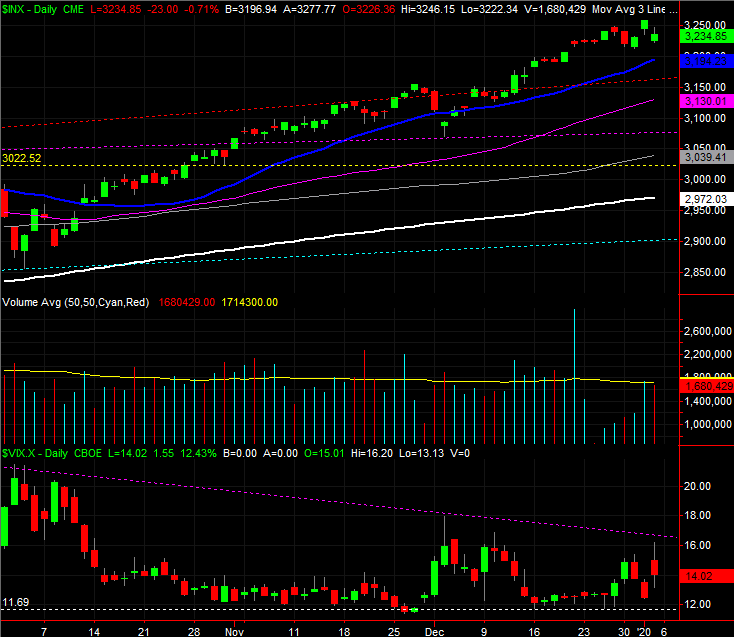 We do see some red flags when we zoom out to the bigger-picture perspective of the weekly chart though. Namely, last week's full-week bar as a spinning top, or doji, where the open and close are more or less the same and more or less in the middle of the high-to-low range. These shapes are often indicators of a pivot point, from a net-bullish to a net-bearish situation in this particular case; the doji is the point of equilibrium. The only fault with this one is the fact that the open and close weren't completely above the previous week's close of 3240. A doji or spinning top positioned above that level would have really suggested a "last gasp," so to speak. 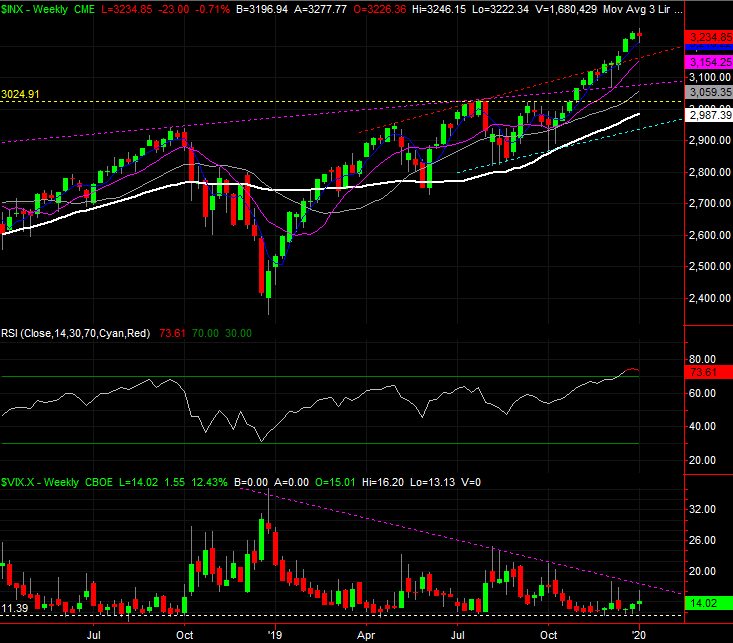 The weekly chart puts another important item front and center... the VIX. It didn't break above the falling ceiling that's guided it lower since the late-2018 peak. But, it did hint at a test of that resistance by virtue of its second weekly higher high. If that ceiling doesn't hold the VIX down at the same time the S&P 500 itself starts to break under any of its technical floors, that's a problem.

On the other hand, it's not exactly a huge problem. There are support levels peppered all between 3194 and 2900 for the S&P 500, any and all of which could bring an end to any wave of selling. It doesn't exactly matter how due -- or by how much -- the market is due for a correction.

That being said, a slide back to the 2900 area where the lowest of any technical floor now lies would actually be of benefit, cooling the market off and setting up what should be a pretty good run for the rest of 2020. The only question is, will investors let the market only give up "a little" ground. The pullback that started to take shape in October of 2018 looked like it would become a nice, run-of-the-mill pressure release, but it quickly turned into a meltdown that proved out of control. Traders' psyches are a little more on edge than usual right now... one of the problems keeping a lid on rallies as well.

Same basic story with the NASDAQ Composite and the VXN. It pushed its way into an overbought situation thanks to the early October rally, and the VXN is contending with a felling ceiling of its own. There's a doji/spinning top in place now here as well. Until the composite actually starts to smash through some floors though, we don't want to read too much into the clues we've been given. The market's given us plenty of headfakes in the past, including the recent past. 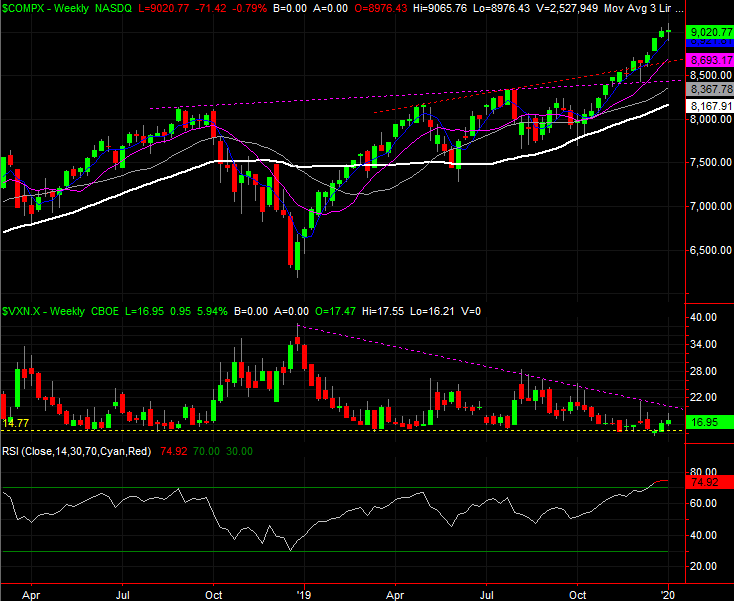 One last thing to put on your radar this week that we can't yet dive fully into -- the market's put/call ratio (equity-only products) ended the year as low as it's been in months. We could chalk it up to end-of-year rolling off of expired positions and into new ones, but we didn't see that happen last year. Regardless of the reason, the options market is saying traders are more optimistic and less worried now than they've been in a long, long time. This is the kind of complacency that comes back to bite you when you least expect it.

No matter what, if we see the put/call line form a clear "V" shape, there's lots of room and reason for selling. Stay tuned on this front.