Weekly Market Outlook - As Big As Friday's Gain Was, Stocks Still Have Much To Prove 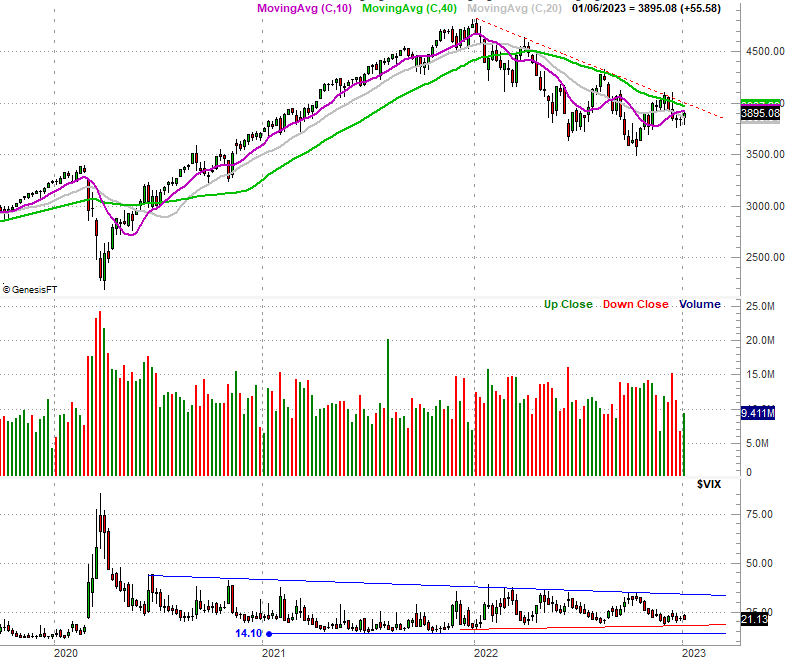 The four-week losing streak was finally snapped. Thanks to Friday's 2.3% bounce, the market finally managed to stop its bleeding. And yet, it still didn't actually kickstart a new uptrend. Stocks could still slip back into a downtrend with relative ease.

But, it's at least something to build on. We'll see if the bulls are serious sometime early this week.

The employment report was last week's big Kahuna, but it wasn't the only data worth a look. Earlier in the week we heard last month's ISM numbers. And, the weren't great. The ISM Manufacturing Index slipped from 49.0 to 48.4, coming in just a little less than expected. Meanwhile, the ISM Services Index fell dramatically from 56.5 to 49.6, versus expectations for a dip to only 55.0. 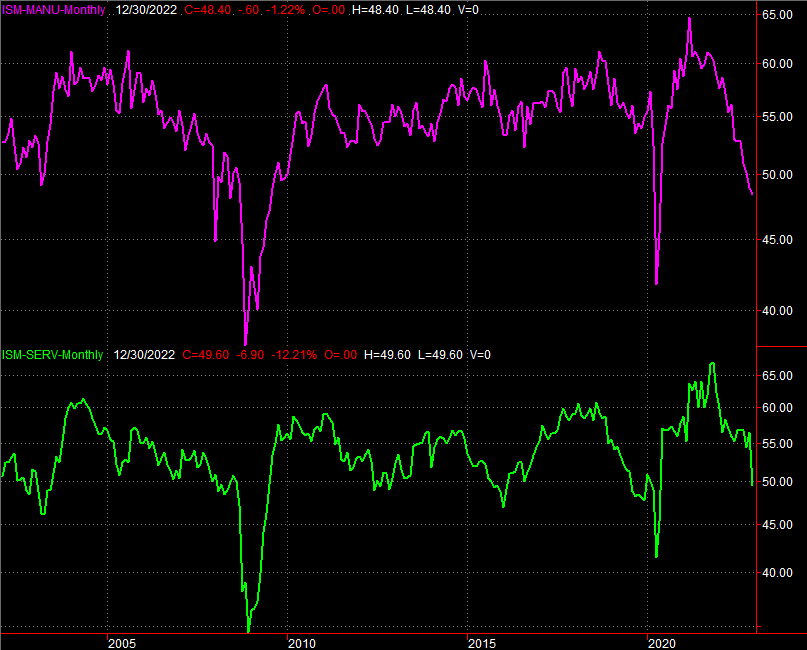 The problem here is two-fold. First, any readings below 50 technically suggests economic contraction rather than economic progress. Second, the sharp decline of services activity suggests the economy is suddenly slowing to a grinding halt. The jolt may do more damage than a slow deterioration might.

As for the jobs market, there's no way to say last month's numbers were anything but good. Payroll growth of 223,000 jobs pulled the unemployment rate down from 3.6% to 3.5%, essentially matching a multi-decade low reached back in 2019.

Earnings growth is healthy too. While not quite keeping up with inflation, paychecks are growing about as much as is feasibly, sustainably possible.

While there's no chart of it, also know that -- per last week's release of the minutes from the Fed's most recent meeting of the Open Market Committee -- there's not much chance of rate cuts this year. The FOMC does understand high interest rates are a seeming burden. They're doing their intended job, however, without overdoing it right now. 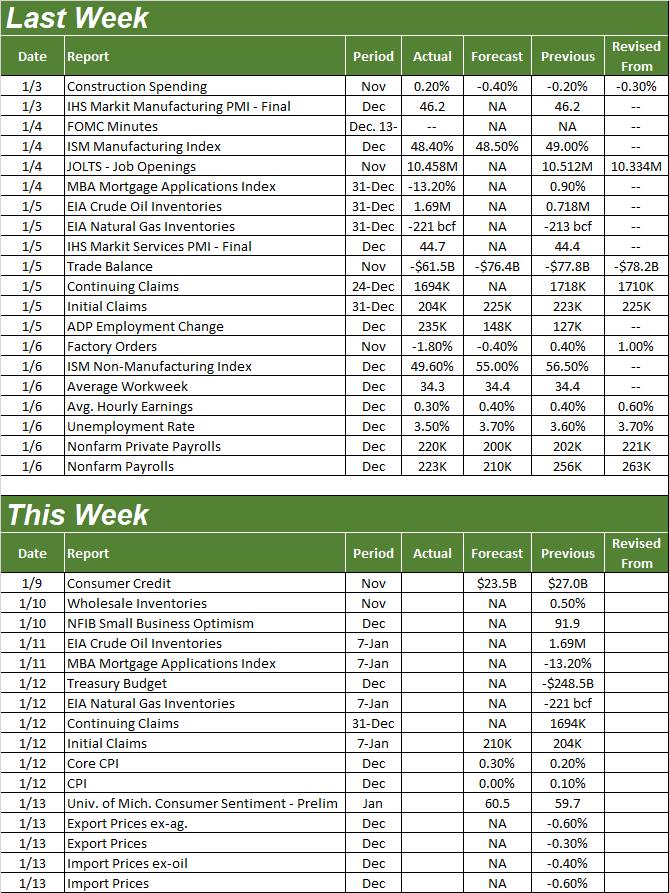 There's not a lot in the cards for the week, although there are a couple of items you'll want to keep an eye out for.

One of these is Wednesday's tally of mortgage applications. They've been dropping like a rock, and likely did so again last week. As long as interest in taking out a mortgage loan is waning, home prices will be pressured lower.

We'll also start looking at inflation in detail on Thursday. That's when December's consumer inflation figures are due. While inflation rate growth is slowing, prices are stabilizing at relatively high levels. 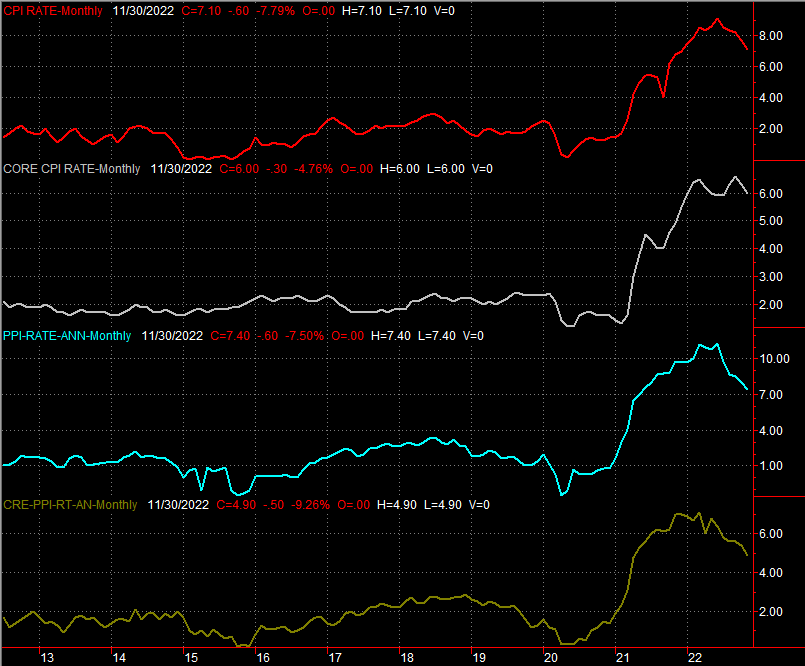 Again, while the Fed feels inflation is being tamed well enough to ease up on rate hikes this year, it's not tamed enough to lower interest rates anytime soon.

The good news is, Friday's big pop pulled the market out of the red and into the black for the week, finally killing a four-week losing streak. The bad news is, even with Friday's strength stocks didn't clear critical technical hurdles.

Nowhere is this more clear than on the chart of the S&P 500. The index tested a convergence of resistance right around 3910. But, it didn't actually hurdle it; it stopped just short of moving above that horizontal ceiling being assisted by the 50-day moving average line (purple). 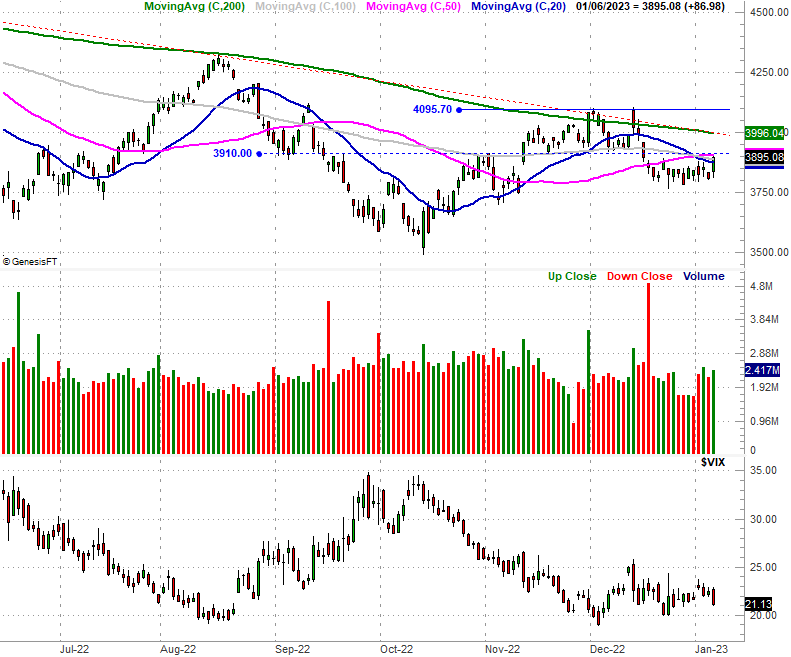 The NASDAQ Composite didn't even fare that well. While it did push up and off of an established floor around 10,300, even with Friday's jump the composite is still below all of its key moving average lines. Indeed, one has to wonder if a minor technical ceiling is starting to take shape around 10,610, where the NASDAQ's topped out a few times since November (though this level was a contentious one going back to October). 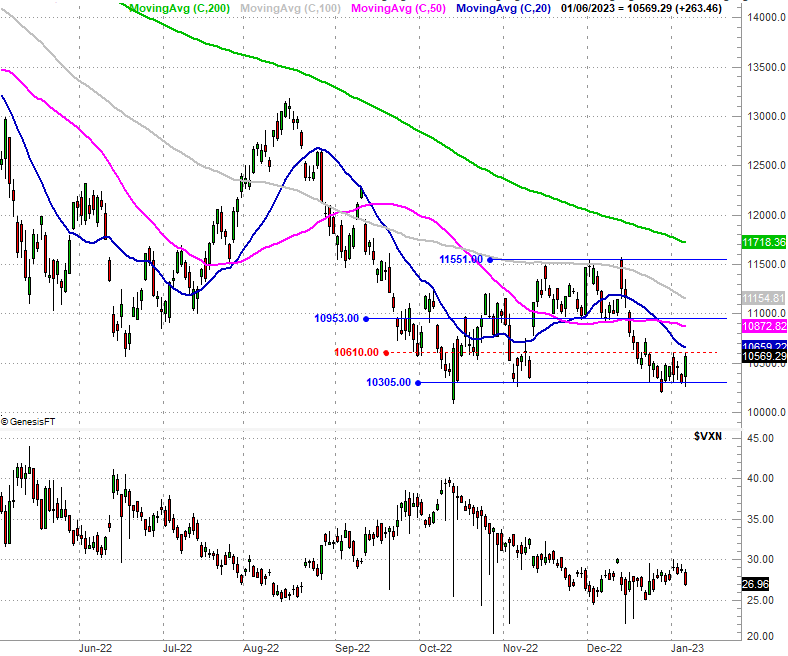 The only index to do meaningfully well last week was -- not surprisingly -- the Dow Jones Industrial Average. It's been the beneficiary of the search for safer, more reliable names in recent weeks, keeping it above key floors when the other two indices failed to hold this ground. Even so, the Dow isn't exactly beyond the risk of a renewed tumble. 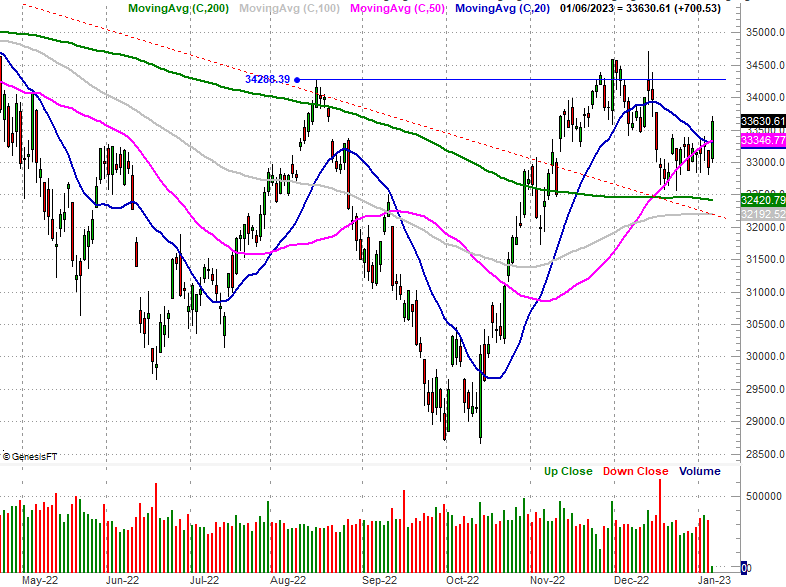 The weekly chart of the S&P 500 shows us why (although the Dow itself is in a similar situation). The falling resistance line (red, dashed) that's kept the index's rally efforts from going anywhere since early last year is still above the S&P 500 rather than below it; the 200-day moving average line (green) is also still intact as a ceiling. Until both are breached, the bulls haven't actually done anything all that impressive.

Perhaps the most troubling -- and bearish -- nuance from any of our charts, however, is the fact that we've still not seen a spike in fear that would suggest a capitulation had finally taken shape to kick-start a recovery.

This will be most evident with the volatility indexes... the VIX and VXN. At the very least they should touch the upper boundaries of the converging wedges that have steered them downward since early 2020. Ideally, the VIX and VXN would peak nearer 40 to say the ultimate bear market bottom had been made. And, just as ideally, such an event would take shape in March, with one more big bearish stumble from stocks. That would make this bear market the average bear market, with last around 15 months and drags the S&P 500 about 35% below its peak.

Of course, we don't have any more evidence that's what's in the cards than we do that last week's rally is the beginning of a prolonged advance.