The last time the S&P 500 boasted as rich a YTD return, Titanic was in theaters 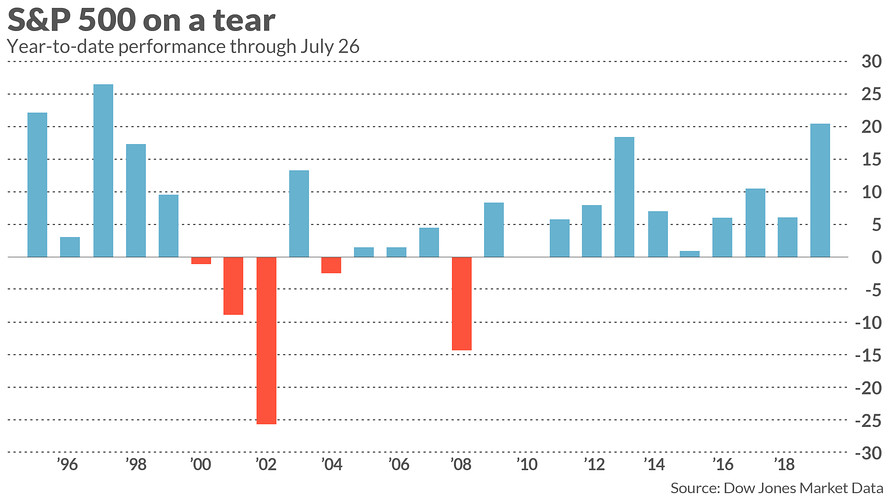 Talk about titanic returns. The last time the S&P 500 stock index performed this well at this point in the year, a movie about a budding romance aboard the Titanic-an ill-fated luxury liner, deemed unsinkable back in 1912-was unspooling in theaters in 1997.

Titanic the movie went on to become the third-highest grossing movie in the world, generating $2,187.5 billion, while the actual Titanic sank on April 14,1912.

However, Wall Street investors may be hoping that the stock market extends its own blockbuster run and avoids any major icebergs.

The broad-market benchmark is up nearly 21% though the first seven months of the year, which would represent the richest year-to-date return for the S&P 500 through July 26 since 1997, when it gained 26.74%, according to Dow Jones Market Data.

Information technology shares have led the rally in 2019, up 33.2% year to date, with consumer-discretionary shares (25%) and the communication-services sector (24.8%) rounding out the top-three performing sectors among the S&P 500's 11 thus far in the year.

Year-to-date gains for the Dow Jones Industrial Average (16.4%) and the Nasdaq Composite Index (25.5%) aren't too shabby either, representing the best year-to-date return for the 123-year-old blue-chip gauge since 2013 and the best for the technology-heavy Nasdaq since 2003.

The catalyst for the rally has been clear: easy-money policies from global central banks.