Midweek Update: Wednesday's Gain Is Impressive, But Not Game-Changing... at Least Not Yet 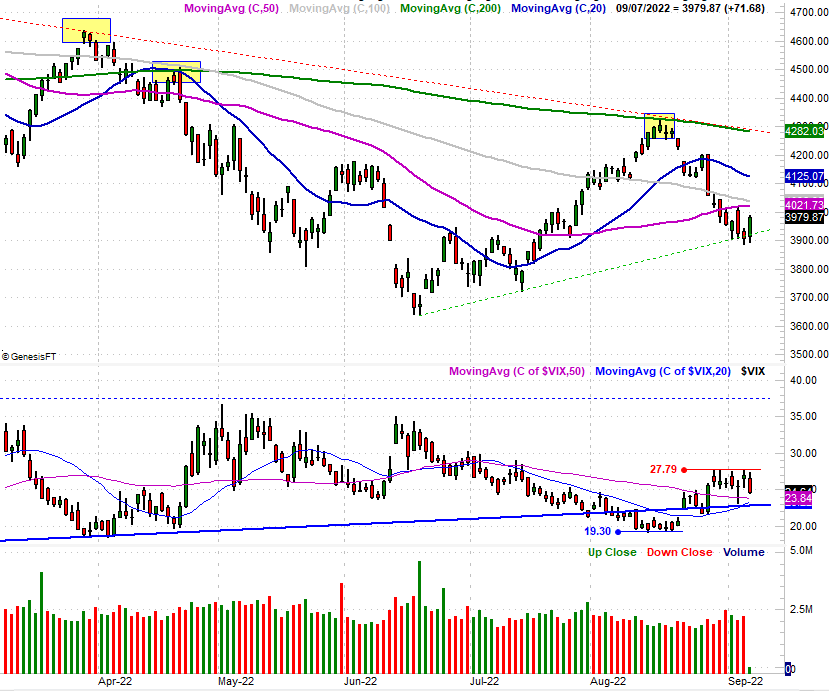 For the first time in a long time, the market logged a gain. The S&P 500 rallied 1.8% on Wednesday, while the NASDAQ Composite snapped a seven-day losing streak with a 2.1% romp.

If you think this is evidence that things have taken a longer-term turn for the better though, think again. Today's advance can be chalked up to the sort of volatility you'd expect to see following a three-week, nearly-10% rout.

The good news is, it's quite clear where both of the aforementioned indices need to go before we can seriously entertain the prospect of more prolonged upside.

What we're really watching on the daily chart of the S&P 500's daily chart, however, isn't the S&P 500 itself. It's the index's volatility index. It's seemingly still bumping into a ceiling at 27.8, yet is also still above a confluence of support all around 23.7. The next move outside of those confines may be the best indication of what to expect for the foreseeable future.

The NASDAQ Composite is in a similar -- though not identical -- scenario. It's still below its now-converged 50-day and 100-day moving average lines, but even with Wednesday's bounce remains below a critically important support line (red, dashed). And, like the S&P 500's volatility index, the NASDAQ's volatility index is seemingly stuck between a floor and a ceiling at 30 and 34, respectively. Moving past (or failing to move beyond) any of these lines will be telling. 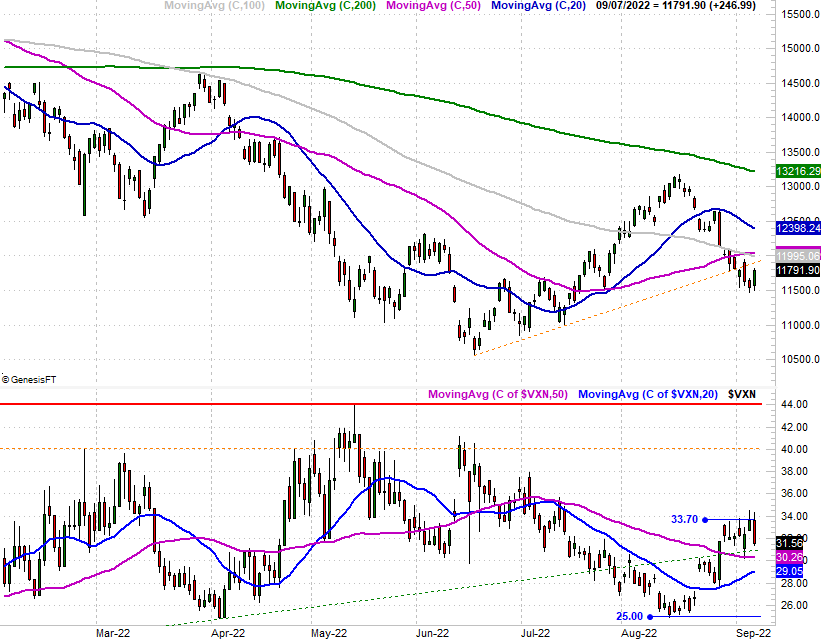 As far as predictions go, we're still inclined to assume the worst here... at least in the short run. Today's gains truly do look rooted in sheer volatility rather than looking like the beginning of a reversal, particularly in that there was no news behind the move. It's also worth repeating that this is usually a lousy month for the market, and traders appear to be willing to create a self-fulfilling prophecy. That would push any meaningful recovery back to October, which is when most bear markets end anyway.

Indeed, it's arguable that the best thing for the market (short-term as well as long-term) would be continued downside in September that allows traders to fully digest the likely three-quarter point rate hike due later this month. That should be the last of the huge interest rate increases needed, as we're already starting to see slight evidence that inflation is being curbed. Once the market feels comfortable with the idea that any future interest rate increases will be of the palatable quarter-point variety, these one-off rallies will be in better shape to serve as the start of something more.