Here We Go Again: Wednesday Is a Make-or-Break Day

You've heard it before, but after Tuesday's action, it needs to be said again - stocks are near a breaking point, but not yet past it. If things go poorly (for the bulls) on Wednesday, the S&P 500 will find itself beyond that line in the sand.

The daily chart of the index in question speaks for itself. The S&P 500 pulled back to the lower boundary of that narrowing range (light blue) as of Tuesday's close. It's not the first time we've seen this test though. In fact, it's not the second or even the third time we've seen it. All the tests of this floor are highlighted in yellow on the chart. 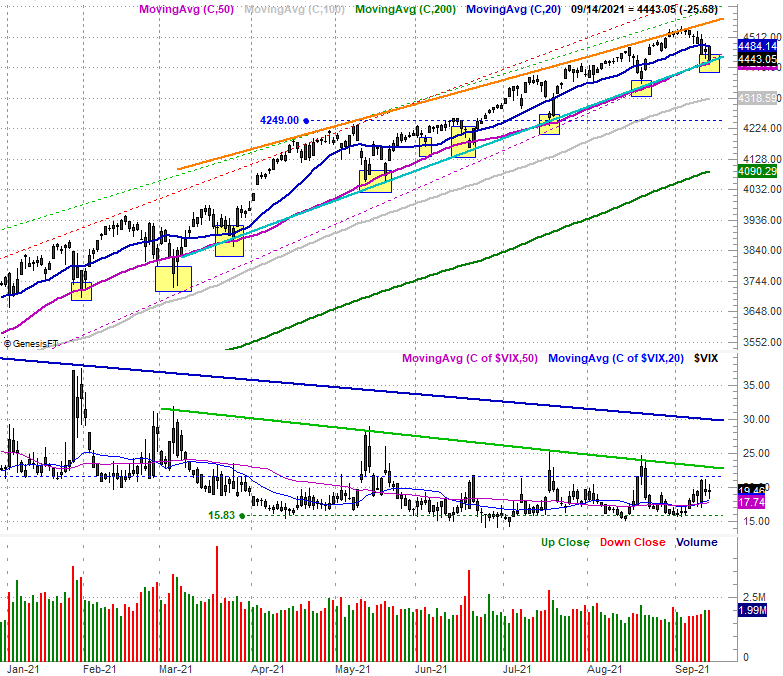 The S&P 500 isn't the only index that's starting to technically crumble, however.

Remember last week when we pointed out how the Dow Jones Industrial Average has already broken below a key technical support level that had been guiding it higher since February? Well, that's still in effect, but the Dow fell under another key floor on Tuesday. With Tuesday's close of 34,578, the Dow Jones Industrial Average is now under its 100-day moving average line (gray, at 34,648)... for the first time since October of last year.

No, the NASDAQ Composite hasn't moved under any of its key technical support levels yet.

It's a tricky situation. Most traders innately feel this overbought market is due for a corrective move, but they also know that doesn't necessarily mean it has to happen now, or at all. There's a lot to be said for momentum, even of the only thing keeping it moving is that momentum. We're also in what's usually a bearish month for stocks, but again, so what? If the bulls intend to keep going, they're going to keep going. Sanity and valuation are irrelevant. It's also telling that the S&P 500's Volatility Index (VIX) didn't match the S&P 500's breakdown with a comparable break up and above it's falling technical ceiling.

On the flipside, sooner or later things have to break. Pretending it can never happen is dangerous if only because once it does start to happen, you may be in denial that it's taking shape. You could watch it all unravel, and just ride it lower the whole time without ever doing anything about it.

Also bear in mind that while stocks may dish out a bullish day on Wednesday, that's not necessarily a full-blown reprieve. We would expect something of a bounce and pushback here. It just may not go anywhere. Breakdowns are more of a process than an event.