A pause or a top? Experts are split on where the S&P 500 is headed next as earnings kick off 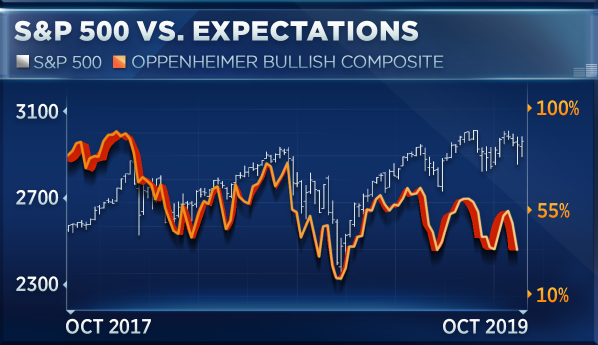 What’s in store for the S&P 500 as the final earnings season of the year kicks off?

The index’s recent sideways action has made that question top of mind for investors — and, unsurprisingly, many disagree on the answer.

“I think markets are positioned to surprise higher just ... given the lack of enthusiasm out there,” Ari Wald, head of technical analysis at Oppenheimer, said Monday on CNBC’s “Trading Nation.” “I think you’re at a point where rates are going to begin to stabilize here and you’re going to get some of these pro-cyclical sectors starting to act better.”

Those “pro-cyclical sectors” include the financials, which marked the start of earnings season on Tuesday with their reports. J.P. Morgan Chase and Citigroup surprised to the upside, while Goldman Sachs’ results fell short of Wall Street’s expectations.

Wald said his firm was approaching the group “selectively.”

“We are bullish on a name like J.P. Morgan that we think is going to break through big 18-month resistance,” he said. “I think a lot of the financial sector [is] really going to be just correlated to how rates do, and I think rates are just really overdone to the downside.”

Considering the notably low reading on OpCo’s Bullish Composite index, an indicator that uses four popular surveys to track the market’s sentiment, that all could make for another leg to this year’s rally, Wald said.

The index is “currently towards the lower end of its multiyear range going back three years ... at 33% bullishness,” Wald said. “I think the reason for kind of this reset in sentiment is really just the overall poor market performance.”

And, after what Wald called a nearly two-year bear market beginning in January 2018, it’s time for this pause to turn into a pop, he said.

Boris Schlossberg, managing director of FX strategy at BK Asset Management, wasn’t quite as optimistic that earnings season would put stocks back on track to new highs.

“I think even if [companies] outperform expectations, they’re going to warn going forward because of all the uncertainty going on between [the] U.S. and China on the trade issue and the fact that I think fundamentally, actually, the economy is worsening, not improving,” Schlossberg said in the same “Trading Nation” interview.

That could mean that what investors are seeing in the S&P 500′s recent performance is more of a top than a pause in its rally, particularly if the market’s negativity begins to “feed on itself” as earnings reports reveal problems tied to trade and demand, he said.

“Yes, sentiment is kind of negative, but it’s actually, to me, much more of a topping formation than it is a pause and a refresh in the marketplace,” he said. “I’m afraid that we could actually be seeing much lower prices going forward as far as equities go.”

Schlossberg, who founded trading website BKForex.com, added that while the strong dollar could add to the pain, “that alone is not the real big issue.”

“The big problem is logistics, planning, all of the things that we think of as the back-end problems of business,” he said. “Those are things that have just come to a screeching halt right now as everybody’s trying to figure out what to do next, and I think that will play itself out in the next couple of quarters on a very negative side.”

“For all those reasons, I think the actual fundamentals are declining, not improving, and that tends to tell me that the market is topping, not just pausing now before a move higher,” he said.

Stocks gained on Tuesday following strong morning reports from some of the big banks and health insurance giant UnitedHealth.