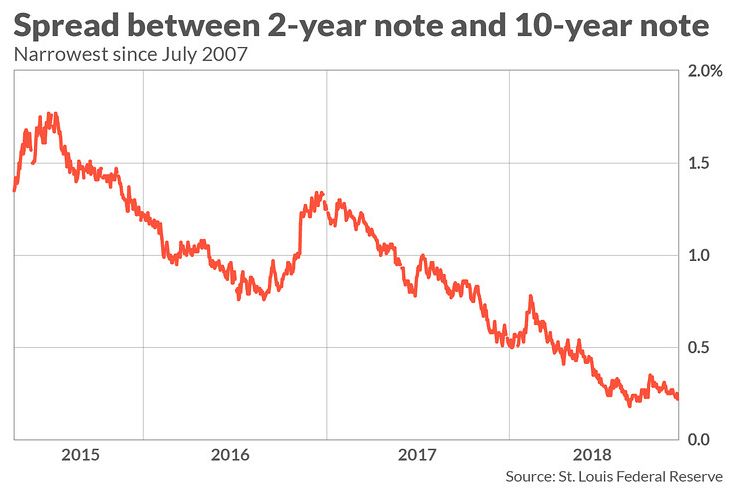 Bond investors are anticipating an increasingly dark landscape for the U.S. economy amid global growth headwinds, higher interest rates and the potential for a full-blown trade war.

Against that backdrop, the yield curve's slope, measured by the spread between short-dated and long-dated yields, are closing in on a so-called inversion.

That is because a flat yield curve currently reflects investors' fears that the broader economy is succumbing to tighter financial conditions as the Federal Reserve pushes up interest rates. The central bank is projected to raise rates by another quarter-percentage point in December, even as investors are uncertain if the central bank will slow down its hiking path.

An inversion implies investors are selling short-dated bonds at a brisker pace than their long-dated counterparts. Bond prices rise as yields fall.

On Monday, the spread between the 2-year note and the 10-year narrowed 4 basis points to 0.16 percentage point on Monday, its flattest levels since July 2007.

When triggered, this bond market indicator has been an accurate predictor of recessions, though the timing between an inversion and an economic downturn can vary from six months to as much as two years, strategists have said.

Meanwhile, less common measures of the curve's slope, like the gap between the 3-year note and the 5-year note have inverted, even as investors concede the interactions between two short-dated maturities doesn't necessarily shed much light on the bond market's outlook for the economy.

Still, the last time the 3-year and the 5-year note inverted was back in 2007. That is also the same year that an inversion occurred between the more closely followed 2-year and 10-year Treasurys.

"Inversions tend not to be particularly dramatic, so the intraday event is more of a technical milestone than breaching a level in outright yields," wrote Ian Lyngen, head of U.S. rates strategy for BMO Capital Markets.

The narrowing spreads between the rates of long and short-dated government debt comes even as stock markets have kicked off the week on a high note, after President Donald Trump agreed to postpone further tariff increases on Chinese imports. The S&P 500 and the Dow Jones Industrial Average both ended Monday with gains of at least 1%.

Yet investor pessimism over the deal's ability to produce a more concrete and comprehensive resolution of tariff disputes has partly meant that the bond market will keep the spotlight on a U.S. economy that has so far remained resilient to tariffs, but which analysts say could finally buckle to softening global growth next year.

"Our next technical stop is 10 [basis points] with a real chance that the combination of a committed FOMC and mounting global economic headwinds puts the curve below zero as 2019 gets underway," said Lyngen, referring to the next hurdle for the yield gap between the 2-year note and 10-year note.